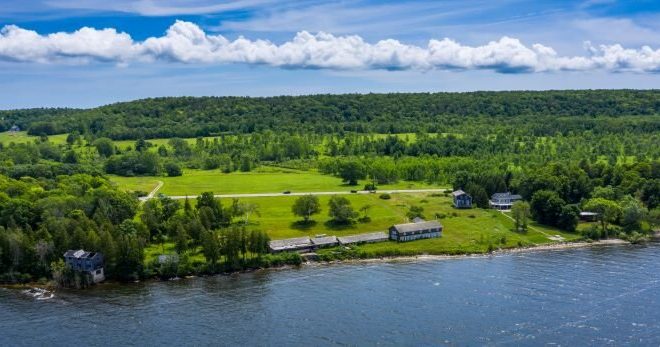 Guess we missed a spot.
A story this fall on missing links – Door County golf courses that vanished or never fully materialized – prompted a call about a location we did not mention.
Terry Goode, 77, of Sturgeon Bay once played nine holes at Chateau Hutter, the long-closed resort property north of Little Harbor on Bay Shore Drive.
A neighbor and a board member on the Bay Shore Property Owners Association, Bryan Troutman, said he didn’t know anyone who ever golfed at the course, but some of his neighbors found golf balls near the property.
Troutman said the caretakers now seem cordial and have done recent reroofing repairs to some of the buildings at the property. But he’s not sure of the intentions at the resort other than preservation. Attempts to reach the owner of the property were unsuccessful.
Unlike a vanished course on Chambers Island and fairways that were carved through boreal forest north of Baileys Harbor, Goode can no longer see any remaining evidence of tees or greens when driving past Chateau Hutter on Bay Shore Drive.
“The course was down close to the water,” he said. “The guy was just building this property, and he was going to put in a 27-hole golf course.
He never got beyond nine holes.”

Goode’s dad frequently boated between Fish Creek and Sturgeon Bay. After cruising past the resort in 1959, he told Goode it looked like it might be open.
“He wasn’t even sure you could play it yet,” Goode said. “So my brother and I got in the car and we drove up there and the guy said, ‘Oh, sure, you can play the course.’ It was in terrible shape. It was brand new. The weeds were growing around the greens and the fairways were barely cut.”
But he never forgot one intriguing hole that took golfers toward Green Bay, along the woods and then straight back away from the bay.

“It had the shortest par-5 in Wisconsin,” Goode said. “There was a hole, where if you were standing on the tee box, you could look straight through the woods and see the flag.”
The first shot required a 7- or 8-iron down toward the water and then there was another 7-iron shot going parallel to the water for 100 to 120 yards, and then the fairway went straight back into the woods.
“It required three short shots and two putts so they called it a par 5,” Goode said. “You could see the green from the tee but you couldn’t get there because there were trees in between.”
In the late 1950s and early 1960s, owner John Hutter advertised golf for $1.25 for nine holes and $1.50 for 18. He also advertised entertainment at the lodge for $1 “plus federal tax.” Hutter took care of a lot of the entertaining, namely through his movie presentations and travelogues from trips such as those he and his wife took to the Southeast and Key West and throughout Mexico.

By 1966, Hutter began a series of lawsuits against Egg Harbor town officials and neighbors and Door County for blocking some of his projects. Judges dismissed his $2 million lawsuit filed against the Door County Chamber of Commerce and its board members, who refused to accept his payments for membership because of the resort’s bad reputation.
Hutter argued that he lost business since he didn’t have access to chamber listings and advertising, said former chamber board member Bill Bertschinger. However, Bertschinger, former Alpine resort owner, said he and chamber members figured Hutter “did a lousy job of taking care of his people” because “on Monday mornings we would wait for his guests to show up after they checked in there and didn’t like it.”
One of Hutter’s lawsuits included a complaint that the chamber and his neighbors started spoiling his plans as soon as he tried to open the golf course.
The course already was vanishing by the late 1960s, when Hutter once invited people to try a new sort of archery golf game, in which they would shoot an arrow to the green and then “putt” by shooting an arrow at a ball.
Learn more about Chateau Hutter in the article: Chateau Hutter: Door County’s Grand Resort that Never Was at DoorCountyPulse.com.