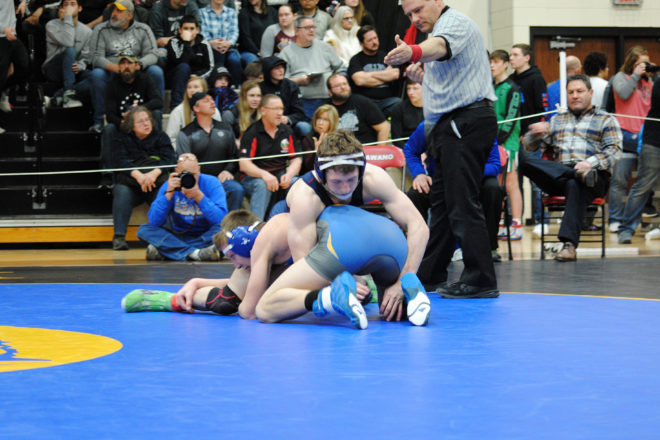 Despite qualifying for the Division 3 state wrestling meet for the second consecutive year, Southern Door’s Grant Englebert took a back seat to teammate Griffin Slezewski.

Englebert says he wouldn’t have it any other way.

Slezewski – 13 months removed from an acute myeloid leukemia (AML) diagnosis and six months after battling a long treatment regimen that led to remission – placed third at 126 pounds in the Bonduel Sectional Saturday and also qualified for the state meet.

“I am so proud of Griff for everything he has overcome and how far he has made it since then,” Englebert said of his friend since kindergarten. “Making it to state is enough of an accomplishment on its own, but considering what he has had to battle in order to even be on a wrestling mat makes it much more impressive to me. Griffin is a great example of determination and grit, and I believe many people could learn a lot from him.”

Slezewski was diagnosed with AML on Jan. 27, 2019; went into remission a month later; and completed his fifth and final round of chemotherapy on Aug. 1.

“I have just come to appreciate the journey I’ve been on, knowing that there might be people not willing to do what it takes to get to where I want to be,” Slezewski said. “I do feel very proud of what I’ve done, but the work isn’t over yet.”

Southern Door’s third sectional participant, sophomore Brodie Overbeck, lost both of his matches by fall and finished 26-19 in only his second season of wrestling. Coach Jerry Englebert said he’s looking forward to big things from Overbeck next season.

Slezewski and Englebert both wrestled Thursday evening at the Kohl Center in Madison after this issue went to press. Visit DoorCountyPulse.com for updates.