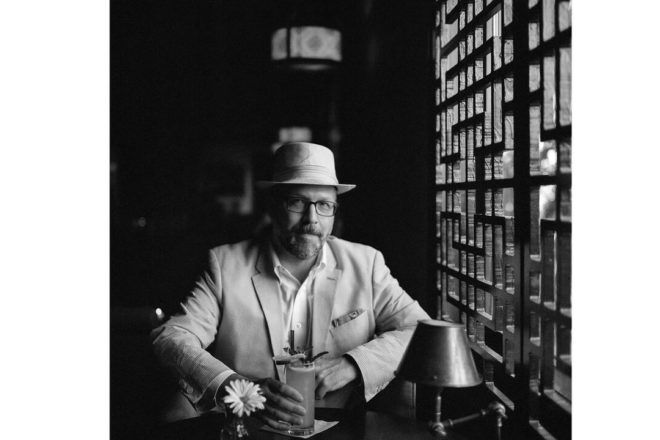 Looking at the lineup for this year’s Door Kinetic Arts Festival (DKAF), one would expect to see dance performances and film screenings, but the cocktail workshop might come as a surprise.

“Frankly, I was surprised, too,” workshop leader Robert Simonson said, because he doesn’t see himself as an artist.

Still, he considers mixology to be a craft, and one he’s been honing for about 16 years. After working for eight years as a New York Times theater journalist, Simonson decided to switch tracks. He did so in 2009, when, he said, “the cocktail revival was in gear,” but few people were writing about it. He elected to fill this gap, learning how to make cocktails as he wrote about them.

Three years ago, Simonson’s brother and DKAF founder Eric Simonson asked him to make cocktails for the festival – an opportunity he jumped on.

“I love Door County, and any excuse to visit Door County is fine for me,” said Simonson, a Wisconsin native who now lives in Brooklyn, New York.

Throughout the week of DKAF, Simonson makes cocktails based on the artists featured each night. The festival hosts creatives from all over the world, so his cocktails might feature ingredients from their places of origin. Films from France might inspire cognac cocktails, for example, and ones from Scandinavia might incorporate aquavit.

The time period in which a work is set also affects the cocktail Simonson chooses. For instance, he might pair a 1950s period piece with a Rusty Nail or a martini, both of which were popular at the time.

The Egg Harbor-based Hatch Distilling Co. created the official drink of DKAF 2022, which Simonson will be naming and serving at the festival. Garnished with a dehydrated orange slice and star anise, the cocktail comprises two ounces of gin, half an ounce of blood-orange juice and half an ounce of simple syrup flavored with black pepper.

Though Simonson has been mixing drinks for DKAF for three years now, it’s his first year since 2019 doing it in person, as well as his first time teaching a workshop – where some will learn that there’s much more to mixing cocktails than they imagine.

“Cocktails seem pretty simple,” Simonson said, “but to get to that point where you’re making the best possible cocktail, there are easily 10 or 12 steps, some of which may not have occurred to other people.”

Even making a screwdriver – a drink that’s just orange juice and vodka – requires considerations that many people don’t give a second thought, from the proportions of the two ingredients, to the brand of vodka, to the kind of glass it’s served in.

“Mixology is a craft because you can learn it,” Simonson said, “though some people are better at it than others, and it’s kind of mysterious why.”