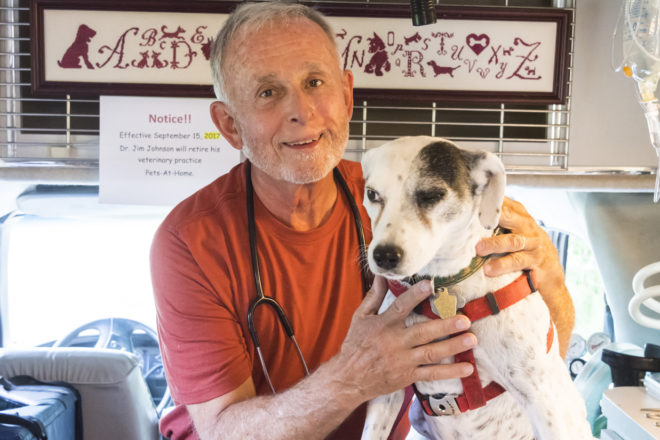 After nearly 50 years of providing veterinarian care in the Midwest, Dr. James Johnson is ready to trade in the late night phone calls, house visits, and long hours for more coffee time with his wife. Johnson, 73, will retire Dec. 31.

While pet owners across the peninsula will miss him, the feelings are mutual.

“My clients have been the most wonderful part of being a veterinarian,” Johnson said. “We’ve been blown away by the great people we’ve met in Door County.”

Like many of the clients he has helped, Johnson’s roots trace back to Illinois.

Johnson grew up in Chicago and attended Lane Tech College Prep High School, then an all-boys school with an enrollment he estimated to be around 5,500 students. During high school, he became interested in agriculture.

As a teenager, he ventured around northern Illinois to see if farmers were in need of help. He found work as a farmhand on a dairy farm in Crystal Lake, Illinois.

Johnson was the winner of an agricultural scholarship, which provided his tuition for his first two years of schooling. Early in college, he lived in an agricultural co-op founded by students after the Korean War.

“After about a year, I realized I wasn’t going to be a farmer…it wasn’t what I wanted to do,” he said. “I still wanted to be around rural people. I decided to concentrate on the veterinarian sciences and applied to vet school at the University of Illinois.”

While at the university, Johnson enlisted in the United States Army at the height of the Vietnam War and officially entered the Army in June of 1969. Following basic training, he was sent to the Walter Reed Army Institute of Research, just north of Washington, D.C.

During his time in the service, Johnson performed laboratory work that eventually brought him to St. Louis until his service ended in 1971.

Johnson was then ready to begin working with animals. He interned at a Chicago veterinarian hospital for one year before moving to work at a practice in Dundee, Illinois, for two more years. He then moved to Janesville, Wisconsin, in 1974 to open his own practice, remaining there for 25 years with his wife Patti Podgers and their children.

When their children left the nest, Patti suggested they head north to Door County, where they had vacationed for more than four decades.

“I was just elated by the idea,” Johnson said. “She was really familiar with northeastern Wisconsin and I thought that if worse comes to worst, I would commute to Green Bay.”

That’s what he ended up doing for eight years, until 2004, when he saw an ad for a used van that was equipped for veterinarian services, including an examination and surgery table. According to Johnson, he could perform 90 percent of routine vet services in the van. He took a plane down to Arkansas and drove the van up to Door County in a snowstorm.

Still commuting to Green Bay, Johnson began seeing patients in his van. On Saturdays, he would head to Washington Island to see clients.

In 2007, Johnson officially struck out on his own after establishing a community of clients through his Pets-At-Home Mobile Vet Service. In addition to treating pets in his van, he made house calls with his truck.

“Most of the house call visits were centered around the fact that people had older or debilitated animals that needed to be put to sleep,” he said. “The idea of having the pet at home was a great comfort to the people and to the animals. It saved the animals the anxiety while being in a much more peaceful setting.”

Johnson’s compassion stretched beyond the pets and to the pet owners themselves, “treating people the way I would like to be treated and having concern for both people and their animals.” This proved true for his estimated 500 Door County clients.

Eileen True, a part-time resident of Sister Bay since 2007, called on Dr. Johnson to treat her cat and dog through the years. She saw in him, “compassion, patience and dedication mixed with being a skilled diagnostician and surgeon.”

“He taught us many tips, such as how to distract the dog by futzing with her floppy ears…while he gave vaccinations,” she said.

Through the years, Johnson has primarily cared for cats, dogs and “pocket pets” such as rabbits, gerbils and rats. He has also treated boa constrictors and, while living in Dundee, cared for an Asian leopard and a 40-pound lion cub whose purr “sounded like it was coming from a lot bigger lion,” he said.

Johnson appreciated both the good times and the challenges, even emergency calls in the middle of the night.

“They’re the best for the reason that people call because their animals are in trouble and they need treatment,” he said. “It gives you the most satisfaction in helping animals out in their time of need.”

For nearly half a century, Dr. Johnson has devoted his career to caring for animals. Although he’ll no longer treat animals, Johnson and his wife will enjoy retirement with Poppy, their half-Jack Russell Terrier, and a lifetime of memories.

True’s words speak for many.

“His gentle hands will be sorely missed.”