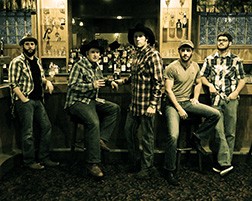 After bringing their covers of country classics to bars and festivals across the county for the better part of the past decade, Door County’s good ol’ country boys, Modern Day Drifters, are releasing their first album.

It’s been a long time coming for the five-piece outfit, made up of brothers Brian and Jason Leist and their cousins (also brothers) John and Mike McCaulley, along with newcomer Jake Hartl.

They took advantage of their steadily growing popularity, which today sees them booking between 50 and 60 gigs a year, to perform these songs and fortunately for them, the audience took notice.

“People liked them enough that we thought, hey, we could sit down and make a record for sure,” Mike said.

“There have been people asking for albums for the past four years,” Brian added.

With Brian on rhythm guitar, Jason on bass, John on lead guitar, Mike on drums/percussion, Jake on steel guitar and mandolin, and all five on vocals (Brian and the McCaulley boys splitting lead vocals, and all but Jake sharing harmony vocals), the group made it happen.

Double Old Fashioned Whiskey is a seven-track album of four original songs and three covers. Just like the men on the record, the album stays local, having been recorded, mixed and mastered at Sound Farmers Studio in Sturgeon Bay with Mark Theide producing, and Rob Tourville and Mike McCaulley as recording engineers.

It opens with a cover of “Lipstick Promises,” George Ducas’ tale of lost love (part of the fabric of country music) and makes way for the band’s first original on the album, “Double Old Fashioned Whiskey.” 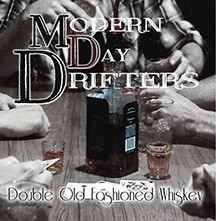 “I gave her everything a girl would ever need,” Brian starts out in his smooth vocals. “A big ol’ house and a big ol’ diamond ring. She stole my heart then she put it out, painted bright red all over this town.”

“That’s the story of two guys getting dumped in their relationships and meeting at a bar,” Brian explained. “You know what I mean?”

“Both of the clichés, sitting at a bar drinking because you lost your girl,” Mike said with a laugh. “But you put your own original spin on it because the Old Fashioned is a Wisconsin thing. People can appreciate that.”

The rest of the album staggers between covers of country musicians Mel Tillis (“I Ain’t Never”) and Merle Haggard (“Silver Wings”), and Modern Day Drifters originals.

Despite the cautionary tale of love gone wrong in “Double Old Fashioned Whiskey” (did I mention she left him for another man?), the guys throw caution to the wind in their sunny, upbeat song, “California Girl,” about a country boy falling for a California girl, all the while knowing she won’t be good for him (“Like a shot of Patrón or a Marlboro Red, she’ll be the death of me.”)

The album’s final track, “Since I’ve Seen Her Eyes” is a sweet memory of the sensory experience of love – holding hands, smelling the air (and her hair), trying to stay warm – though toward the end, there is a hint that this relationship may be running its course as well (“There’s just one thing that keeps running through my head sitting on this porch and that’s the sound on that cold night; she slammed that door.”)

Nonetheless, the guys say the album represents the realness and approachability of the band’s members. After spending a nice evening talking with them and a sunny day listening to their album, I wholeheartedly concur.

Modern Day Drifters will celebrate the release of their album with a performance at Mojo Rosa’s, 7778 Hwy. 42 in Egg Harbor, beginning at 9 pm on Saturday, June 27 and at Stone Harbor Resort in Sturgeon Bay on Friday, July 31 at 8:30pm. To purchase a copy of their album, find it on iTunes or CDBaby.com. Keep up with the band on Facebook.com/pages/Modern-Day-Drifters.