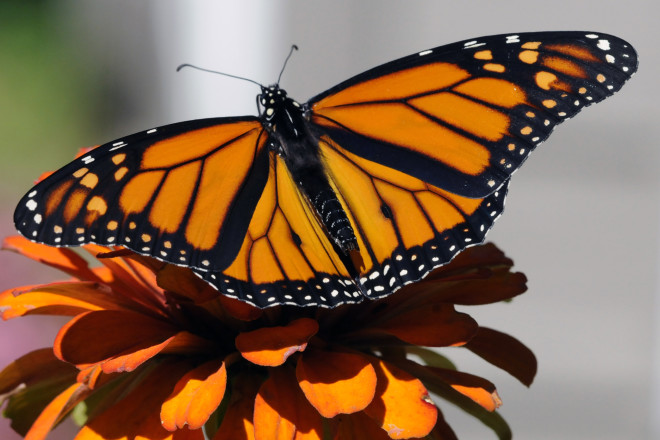 This male Monarch Butterfly shows black scent spots on the veins of its lower wings. Photo by Roy Lukes.

There is a fascinating relationship between a group of plants and an insect weighing about one-50th of one ounce, an insect that is protected by an ordinance in Pacific Grove, Cal. Some Canadians call the insect “King Billy” because the orange and black colors of the tiny creature were those of King William of Orange. Surely you have guessed it by now – the Monarch Butterfly, dependent on one of many species of milkweed plants.

How we treasure the several Milkweed plants growing in our butterfly garden. It is now that it is easy to locate the brightly striped Monarch caterpillars feasting on the leaves of the milkweeds. Often they will cling to the undersides of the leaves.

Several years ago we bought a plant, the Swamp Milkweed, Asclepias incarnate, which we’ve added to our 4- by 8-foot raised butterfly garden in our front yard. This plant when in flower has become an absolute mecca for many different species of insects, especially butterflies. During the past several weeks the Monarchs have been busy laying their eggs on the leaves, and already I’ve counted at least a half dozen Monarch larvae busily eating the foliage.

Very likely the fully grown caterpillars, approximately two and three-quarters inches long, that are two to three weeks away from becoming adult butterflies, may be the last group to develop here. The newly emerged adults will be the only generation produced during the summer that will have the urge to migrate.

Days becoming shorter and temperatures dropping will very likely contribute to these strong fliers heading south for Mexico. Studies indicate that a Monarch Butterfly can fly as much as 80 miles per day, for example from Sturgeon Bay to Appleton. Eventually they will reach the mountains north of Mexico City, in the Mexican state of Michoacلn. 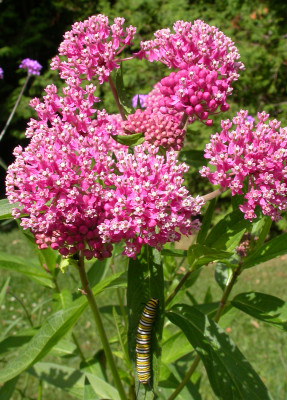 A large Monarch caterpillar clings to a leaf below the blossom on the Swamp Milkweed. Photo by Roy Lukes.

Their arriving at the precise wintering site of their ancestors, after flying an average of about 1,400 miles from their point of emergence, is quite miraculous. For four months during the winter they will not eat, surviving primarily on the energy gained as a caterpillar from eating the milkweed leaves of various species.

The peak of their leaving Mexico in spring occurs at the Spring Equinox, March 21. The butterflies may fly about 1,000 miles north before mating and dying. The offspring will arrive in northeastern Wisconsin in late May to early June. From that point on you can expect a new generation about every four weeks. The cooler the weather becomes the longer the process is.

A minimum air temperature of 59 to 61 degrees Fahrenheit is critical for their flight. They cannot fly in air below this temperature. The warm sunny days of mid- to late-September will find thousands of Monarchs perhaps following the shoreline of Lake Michigan on their way to that secluded place in Mexico they have never seen. Try to figure that miracle out!

An interesting thing happened one summer in mid-August while leading a field trip involving 20 people. Ladies outnumbered the men four to one. A female Monarch, easily told by her lack of the enlarged black scent-scale pocket located on the males’ hind wings, landed on the arm of one of the men and appeared to be interested in the salt on his skin. During the course of the next several minutes that butterfly proceeded to land on the arm or hand of only the men. You may draw your own conclusions!

Moments later someone in the group discovered a lovely jade-green chrysalis of a Monarch at least 75 feet or more from the nearest milkweed plants. That was quite a journey for that small caterpillar.

While there are at least 12 different species of milkweeds in Wisconsin, by far the most abundant species consumed by the Monarch caterpillars is the Common Milkweed, native to the other Great Lakes states and Canada as well. The farther south you travel the more kinds of milkweed you’ll encounter. Illinois has 17, Arizona 26, and Mexico boasts of 59 species. Quite a few of these are eaten by the Monarch larvae.

It won’t be long before the milkweed pods will begin to dry and open, sending forth thousands of seeds being parachuted on silky hollow fibers. Strangely these fibers helped to save quite a few lives during World War II. The whisper-light fibers were used as a substitute for the unavailable kapok in the manufacture of life jackets.

Millions of pounds of pods were collected by Midwestern school children getting 25 cents per full burlap sack. I was one of those students and, believe me, I had no idea before beginning the project how many pods would be needed to fill one sack! The milkweed “down” was processed in Petoskey, Mich. Being hollow with natural waxy waterproofing on the outside, the silky fibers served as well in life jackets as they did in the pillows and cushions of many early pioneers. 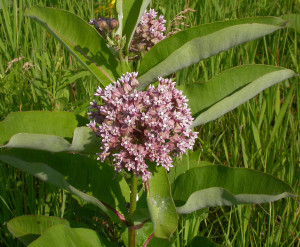 The Common Milkweeds that are found throughout the county have beautiful flowers but the mature plant’s leaves become quite tough by the end of summer. Photo by Roy Lukes.

Judging by the great success of the perennial milkweeds, having extremely durable, large, rope-like roots, they will be around for a long time to come, the leaves feeding the larvae of the Monarchs and the nectar of the flowers nourishing the adult butterflies. The last Monarch butterfly to leave the county will signal an official end to my summer.

This summer we saw many more Monarch Butterflies and larvae than the previous two summers combined. A year ago we feared that no Monarchs would be seen here in 2015. The wintering forests in Mexico have been decimated by logging, but efforts to protect the site of these fabulous Monarchs continue.

It is our hope that the thrill of seeing many Monarch Butterflies sailing over our county’s milkweed patches and nectaring at the flowers will continue for years to come.