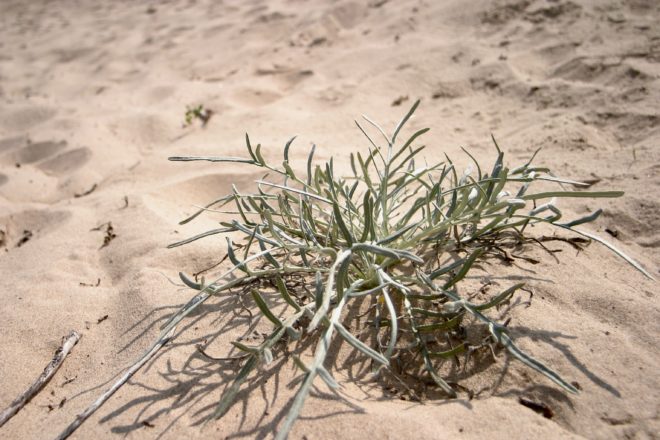 A Pitcher’s thistle in its young vegetative stage. Trampling is a constant threat to this dune-loving thistle.

If researchers at the Chicago Botanic Garden had their way, the Pitcher’s thistle would be moved from threatened status to full-blown endangered species status. It has been listed as threatened since 1988.

“If you could pick a plant that has the worst set of threats facing it, this would be it,” said Kay Havens, a plant conservationist with Chicago Botanic Garden (CBG) who, with colleague Pati Vitt, manager of conservation programs at CBG, led a hike with 20 people at the Door County Land Trust’s Sturgeon Bay Ship Canal Property the morning of Aug. 19.

The hike to learn more about the threatened Pitcher’s thistle was part of a weekend of outdoor activities to celebrate the 20th anniversary of the Door County Land Trust, which culminated in a dinner celebration at Stone Harbor Resort.

Havens explained that CBG is a major botanic garden that has a fairly large research program that tries to understand threats to native plants and what can be done to protect them. She said CBG’s journey with the Pitcher’s thistle began more than 20 years ago with the reintroduction of the thistle at a state park in northern Illinois, which, until then, had not had a Pitcher’s dune population since 1908. 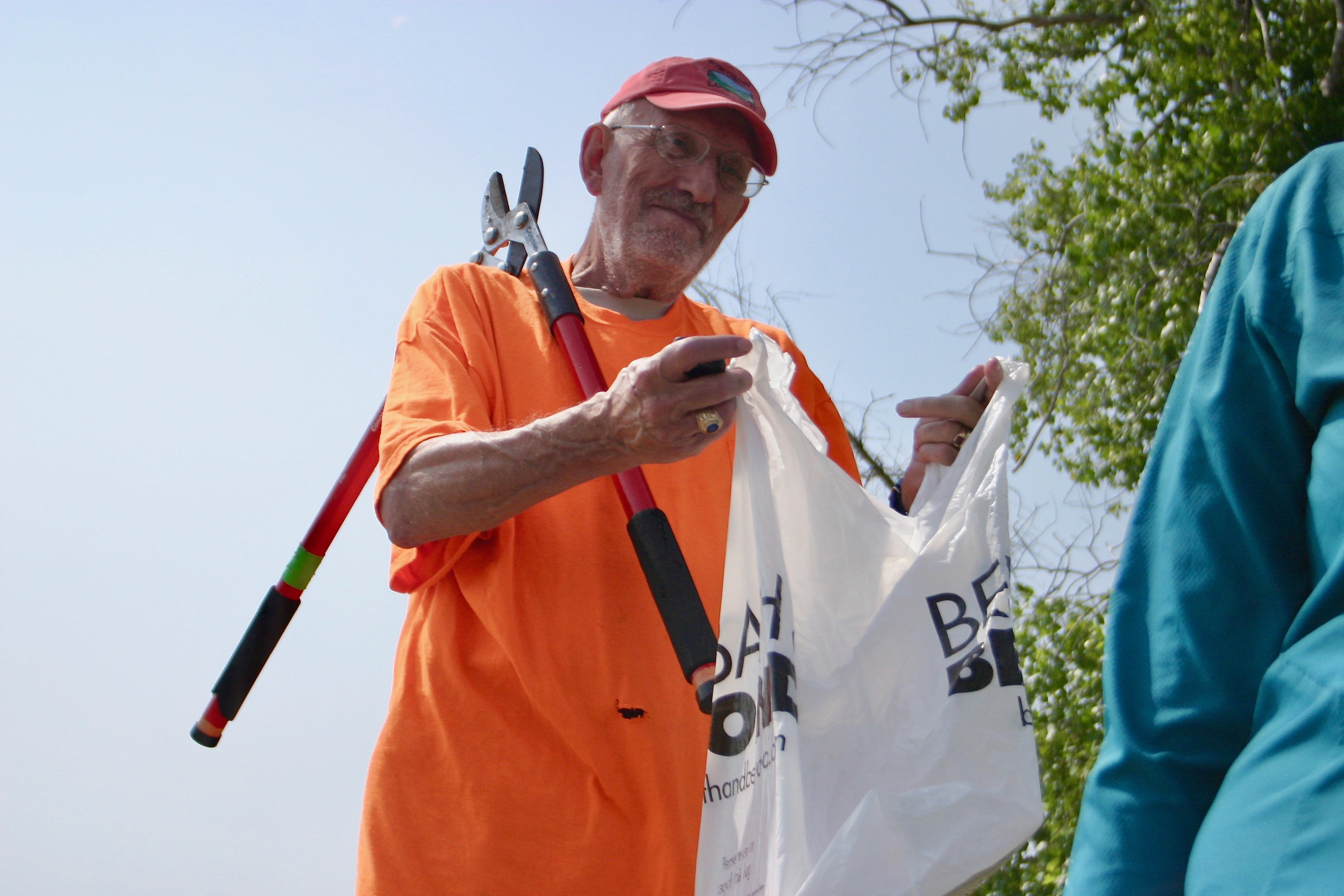 Super volunteer Bill Utley holds a bag to collect things picked up during the hike through the Sturgeon Bay Ship Canal Nature Preserve. It was pointed out that Utley gathered more than 2,000 signatures on a petition to preserve the piece of property. Door County Land Trust Executive Director Tom Clay said Utley is there doing something nearly every day, and Clay has never seen him without the lopper on his shoulder.

The plant is named for its discoverer, Dr. Zina Pitcher, who found examples in 1820 at what today is known as Pictured Rocks National Lakeshore on the south shore of Lake Superior in Michigan’s Upper Peninsula.

The Pitcher’s dune exists in the sand dunes of the western Great Lakes, and is most plentiful in Michigan, with Wisconsin being second for number of plants. CBG researchers began monitoring the Pitcher’s thistle population at Whitefish Dunes State Park, but with rising lake levels, some of that population has disappeared.

Havens ran through a list of dangers the Pitcher’s thistle faces, including  weevils that were released as a bio-control for non-native thistle, climate change, lake level fluctuations, habitat loss and simple trampling by beachgoers.

“It is federally listed as threatened,” she said. “I would probably argue it should be listed as endangered, which is the most severe category, due to the long list of threats. However, there are patches where it’s doing well, and you guys are lucky, this is one of those patches. This is probably one of the healthiest patches in Wisconsin, and I would argue, Wisconsin, Illinois and Indiana combined.”

She added that the absence of the bio-control weevils – a non-native species known as Rhinocyllus conicus that was introduced into the U.S. in 1969 – at the Sturgeon Bay site is one of the reasons the thistle is doing so well at that site.

Havens first found the weevil in plants at Whitefish Dunes State Park in 2010.

“We don’t know why it hasn’t found this site,” she said, adding, “and we’re not telling it.”

Both women refer to the plant with the pet name “Cipi,” derived from its Latin name, cirsium pitcheri.

Havens pointed out that the Pitcher’s thistle is a really important pollinator resource.

“We’ve done a study here at this site, where we looked at the entire flowering season. We started coming up in mid-April and our last visit was in October. We looked at how many pollinators visited every flowering plant on the dunes. The winner? This one [Pitcher’s thistle]. It supports about 60 different pollinators – a whole host of bees use it, monarch butterflies use it, other butterflies use it. It’s a very rich source of both pollen and nectar. If you look around the dunes, there’s not a whole lot of other flowering plants. Many other species probably rely on the Pitcher’s thistle to attract pollinators to the dune, and without it, they would be in jeopardy too. So it’s really important.”

She suggested that anyone who would like to see the pollination work in action should drop by the property in late June to early July.

“You’ll just see this place come alive with pollinators,” she said. “We see monarchs an awful lot on Cipi because of the nectar it provides. They’re getting their soda buzz from the Cipi.”

This is a very strange plant. In its lengthy vegetative stage, it exists as a cluster of leaves called a rosette.

However, it does not enjoy competition, which is why Havens praised the local residents and various volunteers and professionals hired by the Door County Land Trust to keep invasive species at bay, allowing the thistle to thrive.

Individual plants live six to seven years before blooming and dying. Every summer, 10 to 15 percent of the population blooms.

The beautiful 445 acres of land and 750 feet of sandy shoreline on the south side of the Sturgeon Bay ship canal that is home to a thriving, weevil-free population of the threatened Pitcher’s thistle could have just as easily become home to a coal-fired power plant or condos. 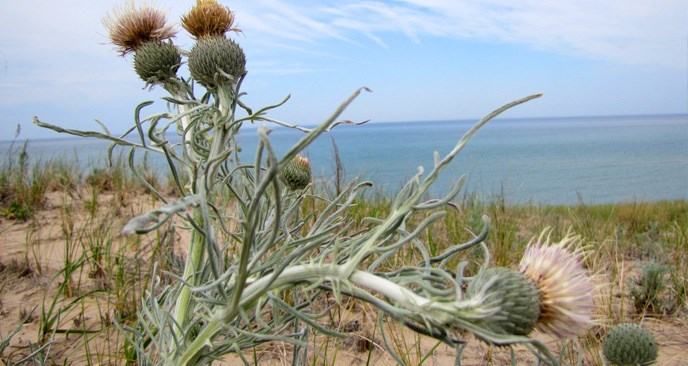 In addition to being home to the Pitcher’s thistle, from the sandy beach to almost a mile inward are the ridge and swale configuration that make this place so attractive to the Pitcher’s thistle, which thrives in a dynamic system where the ridges hold vegetation and the swales hold water seasonally. Schartner said there are at least 23 ridge-swale configurations extending from the beach into the lowland cedar forest and wetlands that surround it.

The Strawberry Creek watershed is also within the preserve, and Schartner mentioned that this Great Lakes tributary is one of the most important sites for Chinook salmon. They come to Strawberry Creek to spawn, and their eggs are collected by the Department of Natural Resources.

Schartner explained that when she joined the land trust in 2006, her first job was working on the acquisition of this property.

Sturgeon Bay Utilities (SBU) and the City of Sturgeon Bay were owners of the property. Schartner said somewhere around 2000, SBU was looking to divest some of its property.

“Landowners and neighbors of this property who had been enjoying it as a defacto public recreation area, they came forth and said, ‘We’d really like this place to be conserved’,” she said.

A group was formed to look at alternatives for the site. Schartner said a lot of ideas were brought forward, including the aforementioned coal power plant, as well as an aquatic industrial park and residences.

“At the end of the day, Sturgeon Bay Utilities and the city said, we like the conservation idea, but all in, it was almost a $2 million project,” she said.

A combination of donations and grants made it happen, with an original purchase of 332 acres in 2009.

Schartner said one of the important pieces of putting together a federal grant proposal was having a threatened species to highlight. She admitted that at first she did not have much faith in the power of a thistle as a poster child for conservation, but has since come to realize that without the Pitcher’s thistle, “Honestly, I’m not not sure if we would be standing here if this plant was not found at this site.”