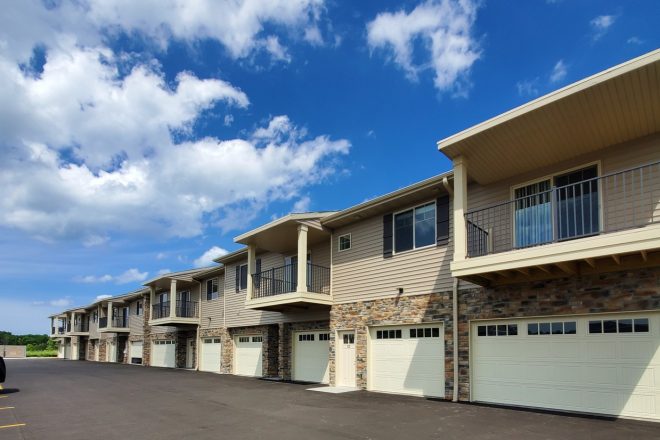 Four new apartment buildings solidly on the path to groundbreaking will add 104 rental units to a Sturgeon Bay market in dire need of housing.

Only one of those – the 15-unit West Side (Sawyer) School Building – has reached the construction phase, but the other three aren’t far behind: the 53-unit Breakwater Residences on the West Waterfront, the 26-unit Sunset School site development, and the 10-unit building being added to the Amity Field Apartments across from Sunset School.

Add at least one more development to that list – and possibly two – according to recommendations made by the Sturgeon Bay Plan Commission last week.

Harbor Ridge intends to construct another two-story townhome building that matches the existing one at the site, and the parking lot at the existing building will be extended to service the new building. The city intends to extend Grant Avenue in 2022 to connect with Sawyer Drive, providing an alternative entrance to the site, which is currently accessible only from Highway 42/57.

The 1.3-acre vacant parcel is zoned commercial, with multiple-family dwellings allowed with a conditional use permit (CUP). The plan commission held that CUP hearing last week, which entailed a presentation by the developer and a public-comment period to receive feedback.

Based on the current assessed value for the existing building, the new structure is expected to have a taxable value of approximately $1,164,500, generating about $10,000 in annual property-tax revenue for the city. The project also provides a one-time payment of $4,200 for the park and playground fee to help fund the city’s recreation facilities and programming.

“It’s nice to have the room to include all the parking,” said Helen Bacon, a plan commission member and alder, versus the downtown projects, where “parking is always a struggle.”

The plan commission unanimously approved the CUP, subject to street trees being planted as required, approval by the city’s Aesthetic Design and Site Plan Review board, and approval of the stormwater-management plan.

David Phillips, representing Estes Investments, received a recommendation from the plan commission to rezone the back half of a 1.87-acre property to general commercial for 15 unsewered storage garages that would be built as they’re individually rented or sold.

“The owners are very interested in cleaning up the property,” Phillips said. “The mobile home is occupied right now.”

Kirsten Reeths, a plan commission member and alder, said the “biggest thing” they’ve heard from neighbors is a need to clean up the property.

“The trailer has to go no matter what,” she said.

The storage-facility plan had been presented to the plan commission previously, but without any concepts for the front half of the property.

The property isn’t currently serviced by city sewer and water – a requirement if the apartment building is to be constructed.

“It’s not there, and it’s not promised,” Phillips said. “It’s an idea and a thought, and hopefully, something the city works with us on. They’re [the owners] 100% behind doing apartments if they get sewer and water.”

Mayor David Ward, who also serves as chair of the plan commission, said federal American Rescue Plan Act money the city received can be used for sewer and water infrastructure, and there was likely to be some active discussions about using that money to remove obstacles to creating more housing.

“I wouldn’t promise you anything, but sooner rather than later because we want the housing,” Ward said.

The commission recommended the comprehensive plan be amended and the unsewered commercial zoning designation be allowed for the back 190 feet of the property. The Common Council has the final say on both recommendations.