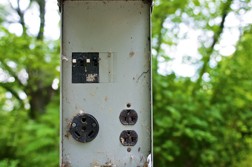 After some upgrades this fall and next spring, Peninsula State Park will offer 62 more sites with electricity, bringing their total up to 165 wired campsites. Photo by Len Villano.

More campers will be able to plug in at Peninsula State Park next season, when the park upgrades and installs electric service to more campsites.

“We do have a lot of people that really utilize and require electric service for their camping units,” said Kelli Bruns, Peninsula State Park superintendent.

In 2013, 165 of the park’s 468 campsites will have electric hookups, compared to just 103 with electricity this year. Sites that already offer electricity will be upgraded to 50 amps, almost double the current power, and 62 additional sites will be wired.

While electricity at campgrounds used to be considered a luxury, Bruns said plugging in is increasingly popular with both RV and tent campers. Visitors often plug in electronic devices, medical devices, cooking equipment and other appliances.

“We’ve got a lot of customers looking for [electricity],” said Dave Benish, parks and recreation specialist for the Department of Natural Resources (DNR). “They’re normally the first sites reserved. It lengthens our camping season in the spring and fall – people stay longer.”

With electricity, campers can plug in heaters and visit parks in the colder parts of the year.

Peninsula State Park isn’t the only state park getting more electric service. Campsites around Wisconsin are upgrading after 2009 Assembly Bill 75 was passed updating Chapter 27.01(15)(b), increasing the proportion of electric sites allowed in the state’s public campgrounds from 25 to 30 percent. No more than half of the sites at a single park, however, can offer electric service.

The current project covers five parks, adding electricity for the first time to 186 sites and upgrading 315 sites that already have electric service. It will cost the DNR $1.5 million, Missy Vanlanduyt, capital development specialist for the DNR, said in an email.

But because sites with electric hookups cost an extra $5 per night, the state will get $80,000 in increased revenue each year once construction is done.

“We do expect that providing more electric campsites will produce an expected increase in annual revenue,” Bruns said. She estimated Peninsula State Park will get an extra $12,000 in revenue every year once the renovation is done.

Bruns, Benish and Vanlanduyt don’t know why the number of electric sites is limited in state campgrounds.

“I have no idea why [they’re limited],” Vanlanduyt said. “Maybe because so many places could go all electric if they wanted to, but to put a cap on it you’re at least guaranteeing that there are rustic sites.”

The state also mandates that at least 25 percent of all state park campsites must be rustic, without electricity, flushing toilets or showers.

Limits to the number of electric sites have been in place since 1999, which Bruns and Benish said might be to give private campgrounds the opportunity to compete by wiring up more sites.

Private campgrounds can hook up as many sites as they want, and many offer other modern amenities like laundry, swimming pools and sewer hookups for RVs.

“Even when they’re camping people’s tickets to survival are their cellphones,” said Chris Heurich from Fish Creek Campground. “You need to plug in your charger.”

The Fish Creek Campground has 80 campsites, and only eight aren’t wired for electricity. The facility also has wireless Internet access.

“A lot of people are excited when they hear that there’s Wi-Fi,” Heurich said. Still, he said most people look for sites in public campgrounds first, especially if they haven’t stayed at a private campground before.

The 62 sites new to electricity at Peninsula state park will be closed in the fall and spring, but can be reserved for dates after July 1, 2013. Sites scheduled for upgraded electric service will be open for normal camping seasons.