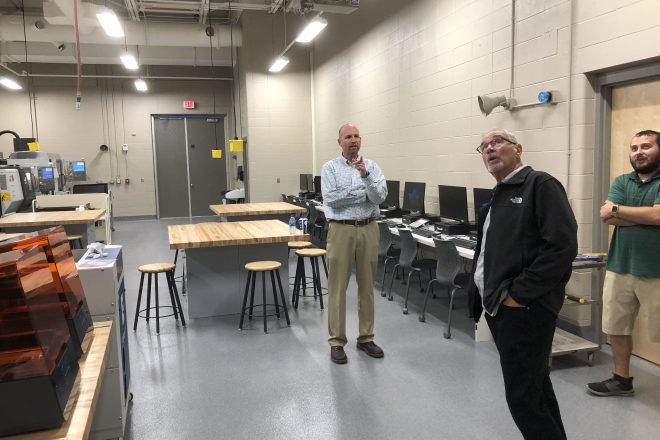 Administrators don’t speak publicly about specific security weaknesses in school buildings – at least not until they’ve corrected those issues.

District residents arriving for parent-teacher conferences got a personal look at the safer entrance to Sturgeon Bay High School this month, and so did former Principal Bob Grimmer, who showed up for a tour the same evening. Grimmer recalled how the front entrance led directly to classroom doors, putting students at greater risk from a hostile intruder.

“When people come in, they won’t have access to the school proper,” said Dan Tjernagel, superintendent of the Sturgeon Bay School District.

Visitors can check in at the district and high school office after entering the first line of front doors, and a second set of secure doors separates that entrance area from the front hall to the classrooms. Meanwhile, students have different doors from within the school to access the administrative, nurse’s and counseling offices.

After a summer of renovation work, the administrative suite now occupies the front of the building. The front-most classrooms – four English rooms and two collaboration spaces between those rooms – now occupy a pod completely separated from the front hallway. The district and high school offices previously occupied that central suite.

“This is a tremendous change,” Grimmer said, viewing a refreshed English classroom with new desks and furniture neatly organized for four students per table. “It’s almost mind-boggling for somebody who remembers the old days.”

The districtwide projects approved by voters by a more than two-to-one margin in spring 2020 included much more than security at the high school/middle school campus. They also included constructing an 8,500-square-foot building to house new classrooms for grades 4K and kindergarten on the Sawyer Elementary campus, which allowed the district to close and dispose of the Sunset Elementary building.

The project dramatically upgraded the Career and Technology Education portions of the building. Those improvements included robotics areas and new state-of-the-art facilities that allow students to take projects from concept, to the computer-aided-design phase, to production on fabrication equipment that the district already had, or on four 3D printers that the district just received. The Fab Lab, paid for in part by a $25,000 grant and many donations, occupies a space formerly used for middle school health classes.

The high school woodshop and metals shop received upgrades, and an expanded mezzanine for tools and supplies now extends from end to end within the technology wing. New air-handling equipment is going online that will not only improve air quality but also, in case of a fire, reduce oxygen from the welding area, adding a line of defense in addition to sprinklers.

What’s more, middle school students no longer need to enter and walk through high school metals and wood shops to use their equipment. They have their own dedicated space, yet they are directly connected to one shared shop space. The high school metals, wood and technology shop areas have interconnecting doors because many projects require many skills.

“We don’t want them to have to go into the hall if they don’t need to,” Tjernagel said.

The project also helped to correct many years of deferred maintenance, such as roof replacement. In addition, the project – both in the new construction and the complete redo of several restrooms – brings the district into compliance with Americans with Disabilities Act standards.

Tjernagel has seen no cost overruns because Miron Construction locked in purchases before materials costs skyrocketed. Low interest rates helped the district to slightly expand the scope of the project, too.

“We had dollars remaining for ‘next’ items on the list,” Tjernagel said. “The taxpayers and residents have gotten more than initially was projected for their money’s worth for the $16.84 million.”

The project is also on time for the most part. Contractors have completed almost everything that directly affects student learning and instruction. An extended wait for materials for the welding booths accounts for the only education-related delay. Tjernagel thought the welding booths would be completed in October, but now he’s been told to wait for November.

A scarcity of glass and garage-door materials have held up the completion of some class-space dividers, and the worldwide computer-chip shortage delayed the installation of a secondary set of front doors at the high school.