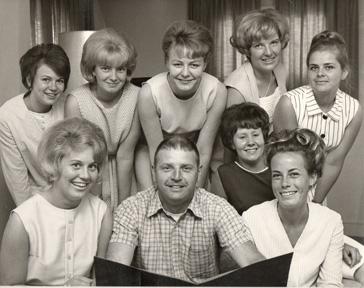 To most people, it’s the restaurant with the goats on the roof, but to thousands of current and past employees, it’s family.

A family of perhaps a couple thousand tied by a bond that can only be created when people are buried by a vast sea of customers, questions repeated millions of times, and pancake orders shouted into a kitchen and recorded only in the minds of swamped cooks. 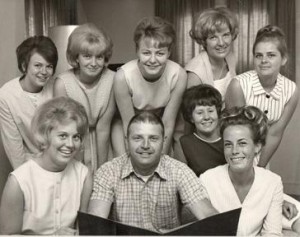 Hundreds of these family members will return Aug. 22 to reunite and celebrate the 60th anniversary of Al Johnson’s Swedish Restaurant in Sister Bay, the county’s most recognizable icon. Mariah Goode, who waitressed at Al’s for the better part of 20 years before moving on to head the Door County Planning Department, organized the reunion. She talked about why Al’s staff has such a special connection to the restaurant and their fellow employees.

“I think the spirit of camaraderie stems partly from the fact that Al’s is a very intense place to work – you are quickly and unavoidably bound together by whatever experiences you’re having at work, good and bad,” she said. “And, since there are so many people that have worked there for so long and/or grown up together, I think it models friendship-building for those new employees coming in.”

“They are fun, giving, inclusive people, and I think that has been infused throughout the place,” she said. “They’re extremely generous people.”

For six decades, Al and Ingert Johnson have offered their staff the kind of security and perks rarely seen in the restaurant or tourism industries, helping countless employees make a life and raise a family in Northern Door.

Al (is there any need for the full name?) built the restaurant into a famous and thriving business, employing about 100 people in peak season. He paid his workers well, and the tips earned by his waitresses have long been the envy of colleagues at other establishments. Those workers have spread their income around the village and the county, filled bars with dirndls (to the delight of many a visitor), and spent on groceries, clothing, and homes. 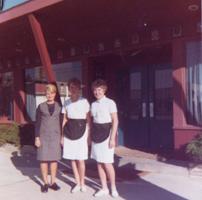 “If one of Al’s employees or friends ever had something go wrong, he would take care of them,” said Anita Conlon, who has worked at Al Johnson’s since Al brought her to the U.S. form Sweden in 1964. Agneta Johnsson, Gunnel Ihrfeldt Lawrenz and Anita Conlon in front of the original restaurant.

Dozens of marriages were forged and friendships formed under the grass roof. Talk at any length to someone who has known the Johnson family or worked at Al’s, and eventually you’ll hear a story about an act of kindness or generosity beyond what anyone would expect of their boss. Keeping the paychecks coming after an accident, taking back a former employee because when they needed money or health insurance, or taking a kid to his first Packer game (in Al’s famously great seats). One such story would be heart-warming, but when they keep coming, it’s nothing short of stunning.

For more than half a century, Al Johnson’s has been the center of Sister Bay, and a piece of immeasurable importance in so many lives. On Aug. 22, the extended family will return to Sister Bay to say thanks. What follows are excerpts from letters and postings on the Al Johnsons reunion Web site from former and current employees, whose memories and stories illustrate the impact that their time at Al Johnson’s had on their lives.

“There was an elderly couple that usually came into Al’s for lunch. From what I remember they could not drive for some reason. Ingert told us she would be gone for a few minutes. She went and picked up this couple, and brought them to their favorite restaurant for lunch. She knew this would cheer them up on a rainy day.

That is so typical of Ingert and Al. Always thinking of nice things to do for others to cheer them up. I can think of a dozen more stories just like that one. Thanks for teaching us life lessons on how to live. I will never forget it.”

“Al never needed an audience to do the right thing.”

“A most sincere thank you for not only providing me the opportunity to work at your restaurant each summer for six years, but also for your generosity and belief in the importance of education. This work experience enabled me to put myself through college, earning a bachelors degree in Home Economics Education.”

Radka and Daniel (last name not given), Czech Republic

“The best experience for us was that we could work for you. Thanks to it we could travel, learn English. For many people from less happy countries their dreams could come true. They could start their new lives.”

“What a boss. Giving Packer tickets to us for the day after we were married…when I make fruit soup, eat pickled herring, or eat lingonberries I reminisce of my grateful years I worked at Al’s.”

“The BEST thing didn’t happen at Al’s, but it certainly involved him. My daughter and I had just been in a really bad car accident. I had been in the hospital in Green Bay for a couple of days, unconscious. My sister, my parents, the man I was soon to marry, the doctors and nurses had all been trying to rouse me out of unconsciousness, with no success. Well, Al comes to see me, and right away he starts yelling! That woke me up fast! I guess when Al had something to say to me, I always listened.”

“We worked hard, partied hard and ate our weight in pancakes and all the other wonderful items on the menu. Back in those days we wore low-cut dirndls, and there was a corner of the restaurant that had a bar where young single men would come in and flirt with the girls.”

Wendland voiced a common theme – you can take the waitress out of Al’s, but you can’t take the Al’s out of the waitress, at least her dreams.

“I still have nightmares from waitressing and forgetting to call in an order or the kitchen not wanting to prepare the food. Will these EVER go away!?”

“Came over from Sweden in 1965 to work at Al’s. Waited one night on this guy who ended up being my husband. Married now for 43 years.”

“Best memory:  Having to give a goat mouth to mouth resuscitation after it fell off the roof and was dangling by a chain.

Worst memory:  Trying to explain the goat to my girlfriend.”

All current and former employees invited.