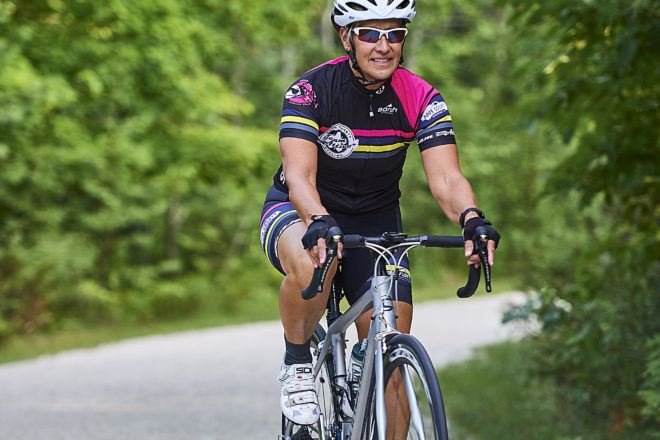 Biking is a way of life for Deb Neuville

It’s not easy to keep up with Deb Neuville. It’s not just that she bikes at speeds of up to 19 and a half miles per hour. Or that the week before our conversation, she had logged 237 miles. Even when she’s merely talking about biking, she has so much to say — and with such enthusiasm — that just when I felt like I had a handle on what she was talking about, we were on to something else.

In fairness, our phone interview took place on Neuville’s way to work, so we had limited time. As we were wrapping up, our conversation ended with a kind of nonchalant mention of the children’s bike-safety program that she helps to run — one that gives out 300 helmets. I promised to follow up by email to get the details.

Neuville sent me a text after we’d hung up: “I get a little excited when I talk about biking.”

The scope and passion of her biking actually merit more than a little excitement. The 58-year-old Sturgeon Bay native has been biking “more intensely,” she said, for the past 17 years. That schedule usually includes two group road rides a week, maybe a group trail ride on top of that, a century ride on her own on the weekend, plus bike-related volunteer work.

If the schedule and mileage sound intense, Neuville’s attitude is decidedly not.

“It kind of gives you the feeling of being a kid again,” she said. “I came from a family of six, and [as kids] when we wanted to go anywhere, we rode our bikes.”

Neuville shares her biking passion with her husband, Joe, and their hobby doesn’t stop when the weather turns cold. They bought fat-tire bikes four years ago, so they trail ride when there’s no snow. In the snowy winter, they simply put studs on the tires and keep riding.

“We live three miles from Lake Michigan,” Neuville said, “so we ride to the lake, and we ride on the ice shoves. It’s gorgeous.”

On the road. On trails. On the ice. Neuville said biking is a good stress reliever that just makes her feel better. No wonder she wants others to get out and ride, too.

“She’s a great role model,” said DCSSA president Dave Ferguson. “She loves being on her bike, and she makes it a part of her life.”

Neuville especially wants to see kids get involved in biking. For 15 years, she and Joe have been a big part of the Bike Safety for Kids program that DCSSA and the Sturgeon Bay Police Department sponsor. Together, the Neuvilles contribute to the effort by storing the 300 helmets in their garage, creating flyers for the event, measuring and fitting kids for helmets, teaching them safety and hand signals, and coaching them through a bike-safety course to practice.

Neuville also volunteers with the Door County Kids Triathlon — after she completes the adult sprint course herself earlier the same morning.

That’s right: Neuville is not just a biker. She also does triathlons. And she doesn’t just do triathlons: For the past three years, she’s finished in first, second or third place and qualified for nationals.

During our conversation, she shared that achievement — like her involvement in the bike-helmet giveaway — in a no-big-deal kind of way because even though her activity level and accomplishments could make her sound like a hard-core athlete, for her it’s not about exercise. She’s really just a woman who likes being active and outside.

“Some people think of cycling as exercise. I look at it as a way of life,” Neuville said matter-of-factly. And her philosophy about riding is this: “The more miles you put on, the faster you get.”

Good luck trying to catch her, but if you want to try, consider this biking advice that she offered with a laugh: “Get a nice pair of padded shorts.”