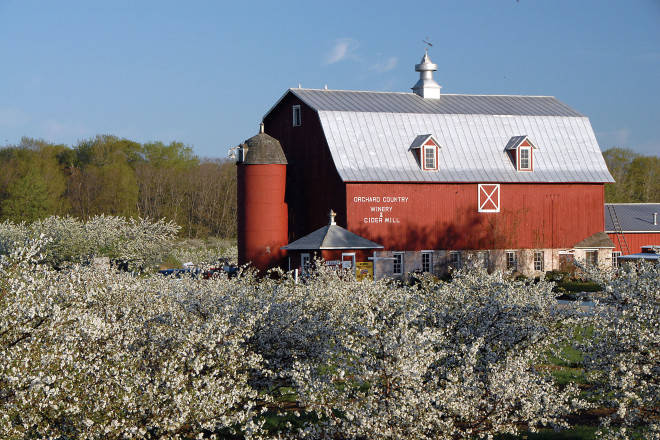 Lautenbach’s Orchard Country Winery & Market of Door County is located on a working fruit farm comprised of 100 acres of orchards and vineyards. “The working farm aspect is important,” says owner/general manager Carrie Lautenbach Viste, “because it allows visitors to experience everything that happens on a fruit farm, from planting in the spring to harvesting in the fall.” Carrie, her sister Erin Lautenbach, and their father Bob own and operate Orchard Country, viewing it as far “more than just a winery or a farm market. We want this to be a destination. People can and do easily spend hours here – touring, tasting, picnicking, and more.” 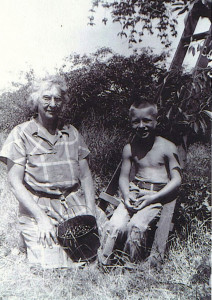 Carrie and Erin are members of the fourth generation of their family to have farmed and worked this land. Their grandparents, Ruth and Bill Lautenbach, purchased the farm’s 100 acres, located about one-half mile south of Fish Creek, in 1955. There, they operated a dairy farm with a herd of 75 cows and raised three children. Viola Lisch, Ruth’s mom, always came up from Green Bay during the summers to help out with the children and sell fresh fruit by the roadside, a tradition continued well into Carrie and Erin’s childhood years.

In the mid-1970s, Bob – the eldest son – took over the farm, and shortly thereafter established an actual farm market building from which to sell fresh fruit and homemade preserves. In 1979, the Lautenbachs began producing and selling their first cider, using an old-fashioned cider press Bob built with wooden slats and cheese cloth liners filled with crushed fruit. A German-style bladder press was purchased in 1989, which continues to be utilized today for the 20,000 gallons of cider now produced annually. They make four types of cider, three varieties using the Montmorency cherry – tart, sweet, and a cherry-apple combination – and another that is 100 percent apple. 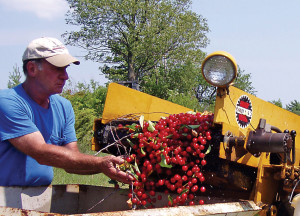 Ruth and Bill began planting the first Montmorency cherry trees on the property in the mid-1960s, a little more than 100 years after the first Montmorency cherry orchard was planted on the peninsula in 1858. Today, 75 of the 100 acres contain cherry trees, producing an annual average of 350,000 pounds of cherries. In addition to the Montmorency tart cherries, which Carrie estimates comprise at least 85 percent of their annual cherry harvest, the Lautenbachs grow Balaton cherries, another tart variety, which, like Montmorency, is used mostly for baking and cooking, and three sweet eating varieties:  Bing, Queen Anne, and Rainier. While Orchard Country does offer the opportunity during the harvest season to “pick your own” cherries, mechanical harvesters collect most of the fruit, shaking approximately 7,000 cherries off an average tree in about seven seconds. (That translates into “picking” 60-100 trees per hour, and enough cherries to make 28 pies or 30 bottles of wine.) Fresh tart and sweet cherries are for sale in the market, as well as hundreds of locally-produced products using the Montmorency cherry, which Carrie describes as a “versatile, super-fruit.”

The winery was established in 1985, in the restored dairy barn. As in its early days, the w 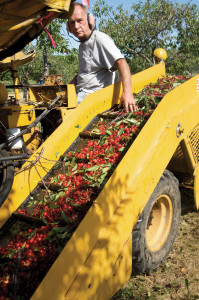 inery continues to produce award-winning wines from fruit grown on the property. In addition to the cherry orchards, a total of 20 acres are planted in apples, such as the Honeycrisp variety, as well as pears and raspberries. The vineyard, first planted in 1999, now consists of five acres of cold-hardy grapes such as Marechal Foch, Frontenac, St. Peppin, and La Crescent. Annually, 23,000 gallons of wine (around 10,000 cases) are produced and bottled at Orchard Country. A total of 30 varieties made with locally-grown fruit, while another five are bottled using California grapes. The types of wines available for tasting and purchase offer a range from dry to sweet, including carbonated, non-alcoholic, and festive wines. “Festive” could be used to describe the overall Orchard Country Winery tasting philosophy, which is:  “Throw away the ‘rules’ and have a desire to learn and a willingness to sample.”

Orchard Country’s spacious farm market and tasting room also provide visitors the opportunity to purchase fresh fruits during the season, just as the first roadside stand did. Other products also use fruits, especially cherries, says Carrie, “from salsa to fresh bakery to pie fillings to jams, jellies, preserves, dips, dipping oils, and much more!” Carrie also notes, “We try to ensure that we carry mostly Door County and Wisconsin homemade products. Cherries are definitely the big push, with over 70 percent of the products in our store using the Montmorency cherry.” 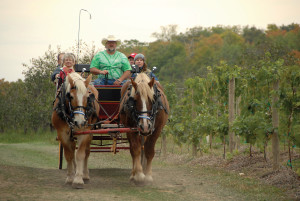 Employees at Orchard Country – seven year round and 20 in season, including Carrie, Erin, and Bob – also try very hard to “add a bit more every year” for visitors to do or experience, including collaborative ventures with other local businesses such as Door County Trolley, Mayberry’s Carriages & Sleighs, and Cottage Row Framing and Gallery. This goal of continually seeking to improve customers’ experiences is directly reflected in Orchard Country’s mission, which, Carrie says, is “to create an atmosphere or an experience that keeps customers coming back.” Indeed, at well over 100,000 visitors annually, Orchard Country seems to be fulfilling that mission.