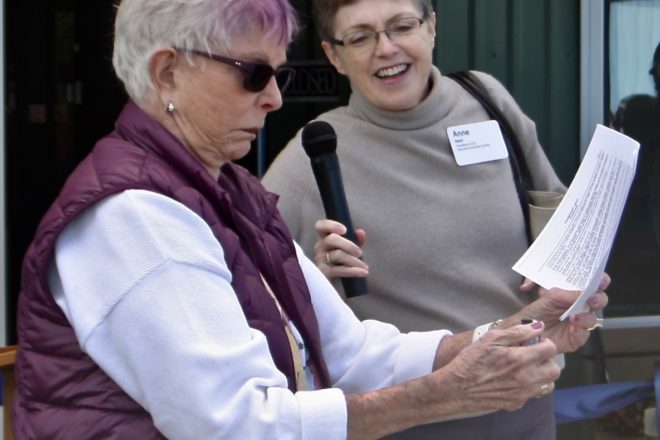 The Door County shelter became a part of the larger organization at the start of the year, one of five campuses the independent nonprofit runs. On Sept. 20, a gathering was held to celebrate the grand opening of the Door County campus under the WHS umbrella as well as a mortgage burning for the shelter building.

WHS President and CEO Anne Reed was on hand to talk about some of the great things that have happened since the transition, which included, at that very moment as she was speaking, the rescue of 100 dogs from the hurricane-ravaged Carolinas, an effort made possible in part because WHS was able to move some dogs from its southern shelters to  the Door County and Green Bay campuses in order to make room for the dogs from the Carolinas.

“You, honestly, right here made that possible,” Reed told the assembled crowd, by having the vision and wherewithal to build the shelter.

She said the Door County Campus also played a role back in July when 40 animals were rescued from a condemned home in the Green Bay area. The animals included 31 dogs, a cat, mouse, guinea pig, rooster, snake, bearded dragon and a quail. In that incident, dogs at the Green Bay shelter were moved to Door County in order to make room for the rescued animals.

She also mentioned that while adoptions through August are on pace with the number of animals that were adopted before the transition, time spent in the shelter by those animals has decreased.

“So let’s call that even,” Reed said. “The big thing we’ve learned, the way to keep animals healthy and save animal lives is to move them through faster.”

The shelter has also returned 53 lost animals to their families this year, compared to 59 returned last year.

For the first time in Door County, the shelter has begun accepting and adopting out rabbits and other small animals. Reed said there also has been success with a virtual homing program where people can post their pets on the WHS website without bringing them to a shelter, and a neonatal kitten fostering program that always needs more volunteers.

A year and a month before the Sept. 20 gathering, shelter supporters had gathered for the naming of the shelter after one of its biggest supporters, Barb Gilman. The shelter is named the Barbara G. Gilman Animal Adoption Center, and because of that, she was given the double duty of setting the mortgage to flame and cutting the ribbon.

“I’m glad this wasn’t yesterday. I’d have burnt the whole building,” Gilman said, referring to the high winds of the previous day, as she set the paper afire.