It was around the middle of this month that my friend Joe and I spent five or six glorious hours on a “mosquito hawk safari,” hunting dragonflies and damselflies while armed only with our cameras. Dozens of them, including the federally endangered Hines Emerald Dragonfly, executed spirals, loops, zigzags, stalls and other amazing aeronautical maneuvers in their insect-capturing or territory-defending ventures.

Species we were able to identify included the Common Green Darner, Twelve Spotted Skimmer, Widow Skimmer, Crimson-ringed Whiteface, Chalk-fronted Corporal, Dot-tailed Whiteface, three unidentified dragonfly species whose pictures need further study, and the Hagen’s Bluet Damselfly. A challenge in identifying these amazing creatures is that, from the moment they leave the water where they lived their larval lives (usually from two to four years) and split out of their skin to become skilled winged aerialists, their appearance can change quite markedly for several days before they attain their true adult colors. Another challenge is that often males differ from females in appearance. 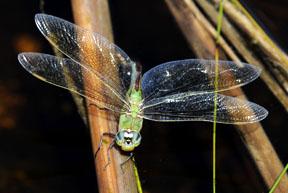 Can you imagine an insect that is capable of consuming its own bulk in food in a half hour? Watch a Common Green Darner pursue insects along the edge of a quiet pond or marsh and you are witnessing one of the finest mosquito hawks in the world, far better than any Purple Martin that graced the skies. By the way, Purple Martins are known to pursue, capture and eat many dragonflies. So do American Kestrels (Sparrow Hawks).

The darners are known to buzz repeatedly through virtual clouds of pesky mosquitoes, catching them by mouth or by using their six spiny legs to form a basket-like “skeeter trap.” Professor James G. Needham, a Cornell University dragonfly expert of some years ago, hand-fed housefly after housefly to a captive dragonfly held in his fingers. He learned that the dragonfly had an insatiable appetite, a “bottomless pit.”

Several years ago Charlotte and I had a very memorable and rather touching dragonfly experience on October 4. We were looking toward the west on a pleasantly mild, breezy afternoon and suddenly noticed several large dragonflies apparently “hawking” insects in midair. The large insects with their gauzy wings were wonderfully backlit by the large afternoon sun. 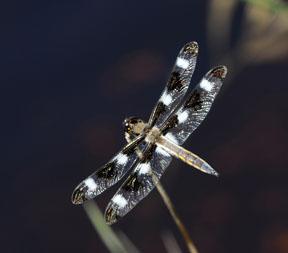 Every now and then a strong gust of wind would send tiny bits of dried leaves from nearby trees fluttering to the ground. One after another the dragonflies would swoop down upon these bits, apparently appearing to them as flying insects, and then just as fast allow them to drop to the ground.

What soon became apparent as we watched these fantastic creatures, which I assumed were one of the large darner species, were the long gossamer draglines from spiders that had been blown upward into the sky and become tangled within the dragonflies’ bristly legs and other body parts and were now gracefully trailing in the air. Occasionally a dragonfly would make some erratic movements while in flight in its attempt to dislodge the 20-to-30-foot-long fine filaments.

The point that touched us was realizing that within a few days, with the outdoor temperature predicted to reach freezing, these flights could very well be their last – ever. Soon the short lives of these cold-blooded flying creatures would come to an end and their offspring, the underwater nymphs called naiads (NAY-uds) that had emerged earlier from the eggs laid by the female dragonflies, would carry on their strange and almost unbelievable life cycle for several years under water.

These voracious little naiads, entirely carnivorous, may spend from two to four years is this aquatic state – their “childhood” – undergoing about a dozen molts. They have a peculiar lower lip, large enough that it folds backward between its front legs for about one-third of its total body length. It is capable of lashing out with great speed to seize its victims, which include aquatic insects, scores of mosquito larvae, tadpoles and even very small fish.

Those naiads that had matured in the fall of last year wiggled their way into the mud at the bottom or their pond and spent the winter in those murky depths. Come this past spring or early summer they crawled out of the water onto, for example, the stem of an aquatic plant, their skin split along the mid-line of their thorax, and out emerged the adult dragonflies. The spent skin, called the exuvium (ex-OO-ve-um), often remains intact on the stem of the plant for some time.

How totally different the nymph is from the adult, like a small fish compared to a Tree Swallow. One year they are creatures of the mud and water, the next they are glistening, maneuverable marvels of the air—from the realm of a fish to that of a bird. This gauzy-winged beauty will mate and spend its very short adult life, several weeks on the average, doing its most important job of controlling mosquito, midge, deer fly and black fly populations safely without chemicals and for no cost.

The astounding wings of some dragonfly species contain as many as 3,000 tiny-celled windows. Several sets of muscles on the inside of the enlarged thorax enable this amazing flier to beat its wings up to around 38 times a second, attaining short bursts of speed reaching 60 mph. 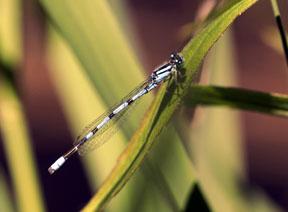 One glance at a damselfly quickly separates it from a dragonfly. At rest their wings are folded vertically and rearward, generally parallel with its abdomen. They have thin abdomens, are slow fliers, and a close look at one’s head reveals its large, hemispherical, widespread compound eyes. In most dragonfly species their large compound eyes come together near the top of their head, and their wings are held outward.

From a nymph in the mud to an adult in the air, is like a minnow miraculously changing into a Chickadee. But no further growth will be experienced when it is an adult dragonfly or damselfly, simply one of the world’s mightiest insect fliers with an insatiable appetite – an aerial acrobat in the summer sunshine.