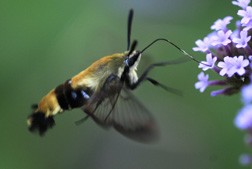 A Snowberry Clearwing Moth feeds on nectar of a tall verbena flower. Photo by Roy Lukes.

Have you noticed a very distinct shortage of moths this summer? Seldom while driving at night have we seen moths in the car’s headlights or had them hit our windshield. Neither have we had many moths lured to our lighted windows or outdoor light after dark. The on-going drought and extreme lack of rain in various areas of the county and state have had adverse effects on moth populations.

Quite understandably many people are rejoicing over this phenomenon, but Charlotte and I are deeply concerned about the moths’ absence. These creatures of the night are extremely important for plant pollination and in the food chains of many other creatures – bats and birds for example. My personal opinion is that it is another indication of global climate change. In reference to the moths, this change may adversely be affecting food plants of both the caterpillars and adult moths, their flight seasons are changing, the distribution ranges are being affected and parasites and diseases of both the adult and larval stages of moths appear to be on the rise.

Lepidoptera, the study of moths and butterflies, has fascinated many people mostly due to the interesting life cycles and sheer beauty of especially the butterflies. Interestingly, of the roughly 2,500 species of these scaled-winged insects in Wisconsin, about 93 percent are moths and just 7 percent are butterflies. However, it stands to reason that the day-flying butterflies attract far more interest than the predominantly night-flying moths, resulting in relatively low interest in and limited knowledge of moths. Obviously television sets glaring back at the indoor viewers at night win out over watching and enjoying the moths.

There are a several small day flying moths including the Hummingbird Clearwing, the Snowberry Clearwing, the inch-wide Spear-marked Black Moth, the very colorful Virginia Ctenucha (te-NEW-ka), and the beautiful little Eight-spotted Forester, one of my favorites. Up to this point, we’ve not seen any so-called Tomato Hornworms on our tomato plants. These develop into the large, intricately-marked, fast night-flying Five-spotted Hawkmoths.

Disturbingly absent at our night windows for the past several years have been the largest and most widely-known and recognized of our moths, the silkworm moths. Included in the commonly-seen species in the county are the Cecropia, Polyphemous, Promethea, and the awesome Luna. In Tamarack bogs and swamps of Door County, there is another rare moth only occasionally seen and experienced, the Columbia Moth, similar to but darker and differently marked than the Cecropia. The host larval food of the Columbia Moth consists of the needles of Tamaracks. 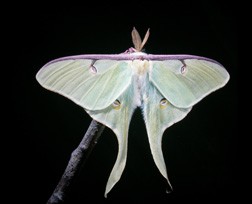 The male Luna moth’s antennae are wider than the female’s. Photo by Roy Lukes.

Several years ago we had an amazing experience while hiking with friends in our woods. Our friend, Barbara, made an exciting discovery on the undersides of some leaves on a two-foot-tall American Beech sapling. There, bodies united in mating posture, was a pair of Luna Moths. The male could easily be distinguished from the female by the greater width of his antennae. The delicate light green of their wings and the slightly-twisted extended tips hanging downward blended beautifully with the similarly-colored Beech leaves.

The moths were apparently quite oblivious to my picture taking. Finally a slight movement of my hand against the twig caused the female to drop to the ground while the male fluttered upward and away in his spectacular slow loping flight. Later our moth expert and friend, Bill Sieker, informed us that had the pair not been finished mating they would have maintained tight contact with each other. He added that the male would very likely continue his search for another female with which to mate.

It was the wide feathery “feelers,” the antennae, of the male that enabled it to locate the female. She emitted a powerful pheromone that could be detected by the male from a distance of a mile or more with the extremely sensitive cells located on his antennae. Straight to the female he flew, mated, and would die within a few days. Their life span at most is about two weeks. In fact, so ephemeral is their existence that as adults they do not eat. They have no mouth parts.

Nature has provided this Luna with a little sac called the spermatheca, which is directly attached to the female’s reproductive system. Following mating, the male’s sperm cells are stored in this container. In other words, the eggs are not fertilized immediately upon mating. Only when this delicate insect locates the proper food plant, such as Beech, Hazelnut, Willow, Hickory or Butternut, and when other conditions are favorable for the offspring, will the sperm be released from the sac and the eggs fertilized and laid. Then the four-inch female dies, leaving the caterpillars to fend for themselves the following summer.

I have often wondered about the possible function of the outstanding little eye-patterns on the wings of some of the giant silkworm moths. Surely the extraordinarily large “owlish” eyes on the Io (EYE-oh) and Polyphemous Moths could frighten small birds, in search of a meal, into not wanting to tangle with that dangerous-looking owl, one of the songbirds’ natural predators. Indeed, the outstretched wings do resemble a small owl.

Perhaps the noticeable eye spots might also draw a predator’s attention toward them rather than the extremely important and more vulnerable abdomen. We couldn’t help but see, as we thoroughly admired the female Luna’s outstretched wings, two sleepy-eyed Elephants facing each other.

Consider obtaining the excellent field guide, Moths and Caterpillars of the North Woods by Jim Sogaard, of the North Woods Naturalist series. I especially like that it includes photos of the moths with their wings closed in their natural resting positions as one most often experiences them.

One easy technique to attract moths to your yard is to hang an old white bed sheet on a line at night and simply shining a continuous bright light at the sheet. If the proper conditions exist for the moths to be on the wing, surely some will be attracted to the white target for you to enjoy, learn about, try to identify and photograph.

Come to the aid of the biodiversity of our county and state, including our dwindling moth populations, by doing what you can to help preserve undeveloped habitat including forested areas, open fields, shores, marshes and swamps. Hopefully a gorgeous Luna Moth will prove to you how wonderful and precious nature can be!