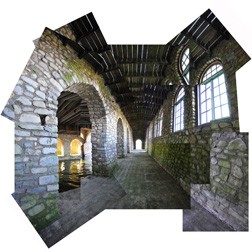 When photographer Taylor Mueller puts his lens to work his goal is to capture a scene in a manner no viewer has experienced it before.

“I use my camera as a tool to deconstruct space,” he says, before reconstructing his images into a collage that re-interprets a scene by using a series of small views brought together to thoroughly understand a space. “The result is more in tune with how we see things, quick glances that build our understanding of the world around us.”

The result creates moments of uncertainty within the image. “Those moments evoke an interesting response from the viewer when they realize something isn’t as it should be,” says the 25 year-old Baileys Harbor artist.

Mueller brings his images to Mr. Helsinki in Fish Creek this October in a month-long exhibit featuring an artist’s reception Oct. 4 from 5 – 7 pm. Since graduating from Knox College in Galesburg, Ill. in 2010, Mueller has sought spaces in his native Door County and beyond that were ripe for his interpretations.

Mueller last exhibited his work in Door County at the K. Allen gallery in 2010 and his work has since appeared in the Peninsula Pulse.

“My work has grown crisper,” Mueller says. “My framing has matured as I’ve refined my collage technique.”

Mueller’s work will be displayed at Mr. Helsinki through the end of October, with an opening reception with Mueller Oct. 4 from 5 – 7 pm. You can view his work on his photo blog.