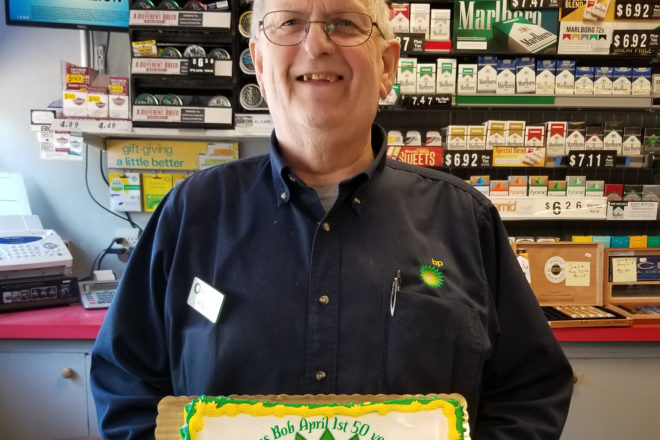 For the last eight years of the past half-century, Robert Mueller has contemplated a relaxing life of retirement.

“I’ve been here 50 years and I’m 73 and I want to retire,” said the owner of Mueller’s Mini-Mart in the heart of the Village of Egg Harbor.

Mueller has had the British Petroleum gas station for sale for the past eight years, but only recently did he have someone with a serious interest that could come to fruition very soon, but that is a story for another day.

This month marks the 50th year in business for Mueller, who started the gas station with his brother, the late Herb Mueller, in the spring of 1968. At that time, the actual gas station was located in the long stone building next to the current BP station. It started life in 1931 as Herman Birnschein’s Point Beach Service Station, who also had a Chevrolet showroom, sold Goodyear tires and repaired vehicles in the three-bay mechanic area. In 1965 the business was sold to Harry Nell.

“It was the fall of ’67 when we bought it from Harry Nell,” Mueller recalled. “When he put it up for sale, my dad said, ‘You guys want it?’ With the help of my dad, me and Herbie bought it.”

It was a Texaco station when the brothers bought it, but they switched allegiance to Standard Oil. Standard became Amoco and in 1998 Amoco was absorbed by British Petroleum. The original station had two pumps – regular and premium.

In 1972, the Egg Harbor gas station was recognized by Standard Oil as one of the cleanest service stations in the Midwest during the company’s “Sweep Up Sweepstakes,” which netted the brothers a 1972 Chevy Blazer.

“That was a real big thing back then,” Mueller said. “We put some lights on it an used it as our service vehicle.”

In 1988 the current station was built and the Muellers went from full service to self service. But they continued to work on customers’ cars.

“Herbie did mechanical work in the stone building,” Mueller said. “At the time there was a stone house here [where the gas station is now]. I did body work over where the Chocolate Chicken is now. We sold that in ’88 to Chocolate Chicken, and then I worked in the barn in back doing body work.”

The brothers continued to do towing, mechanical and body work until the late 1990s.

Mueller’s son, Bobby, who assists his father at the station, points out that his dad spent more than three decades as the Egg Harbor fire chief, and also served on the Egg Harbor Town Board for 30 years as well.

Bobby also points out that “we almost lost him a couple of times,” explaining that his father was diagnosed with non-alcoholic cirrhosis of the liver, which required a liver transplant in June 2001. The elder Mueller pulls up his shirt to show the nasty scar left behind from that operation.

It has been a full and busy life for Mueller, and he is looking forward to the day when he has free time to do what he wants to do.

“If the sale goes through, I’m going to retire,” he said. “I plan to build a house next to the house I’ve got. Two years ago I put up a shop where I tinker.”

“And he’ll go pester the buddies who used to come in here,” Bobby said.

“Sunday mornings they come in,” Mueller said. “I call them the Coffee Klatch Crew. They come in about 6:30 on Sunday morning and we shoot the b******t.”

Mueller said while the regular Sunday crew knows about the potential sale, there are some seasonal residents who may be in for a surprise come summer.

“We’ve been trying to sell for about eight years,” Bobby said. “Some know we were trying to sell, but some don’t know there’s a potential buyer.”