“In 1959 journalist John Howard Griffin darkened his skin for an undercover experiment with racial tensions that would later be published as the book, Black Like Me. Fifty years later, a man with markedly less courage takes on a mission with markedly lower stakes.” – Introduction at http://www.mulletlikeme.com 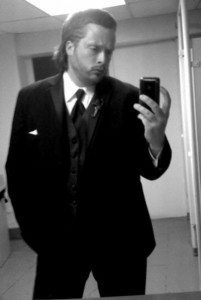 Nyberg in the wedding mullet.

Jackie Robinson, he is not. Branch Rickey called Robinson’s integration of Major League Baseball in 1947 The Great Experiment. Jake Nyberg took on a slightly less pressing cause in May for an experiment of his own, embarking on a journey to see if he would be treated differently just because he’s rocking a mullet.

Nyberg runs a video production company in Minneapolis, but has family ties to Door County and returns to the peninsula often to visit and sit in on the drums with area bands.

What began as a joke (Nyberg’s girlfriend left the country for a couple weeks, and he thought it’d be fun to welcome her home with a mulleted boyfriend), has grown into a cause. 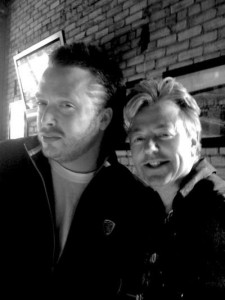 Brian Setzer was not inspired by Nyberg’s do, in spite of how his own cut paled in comparison.

Shortly after sprouting the mullet, his friends began ripping on him for driving a sub-compact Toyota Yaris.

“They said it was not in keeping with the mullet image,” Nyberg said. “So I had to get a Camaro or a Trans Am or a Firebird.”

He settled on a Camaro, but shy of the $2,500 it would take to buy one, he decided to combine his mullet quest with charity.

“I thought, what if I take donations, buy an old Camaro, drive it for a while, and donate it?” Nyberg explained. He began a fund raising drive and partnered with Goodwill, and if he is able to raise the money for the car, it will be donated to Goodwill’s car donation program to be auctioned when he’s finished with his experiment.

So began the quest to match a mullet with a Camaro, a quest that has garnered attention from radio stations, Minneapolis alternative newsweekly City Pages, and now, Chevrolet.

The automaker caught wind of his project and called Nyberg when Tom Peters, the lead designer of the 2010 Camaro, was heading to Minneapolis on a media tour. Soon Nyberg, clad in a black cut-off t-shirt and sporting a mullet in all its glory, found himself driving the latest model, talking car features with Peters.

Nyberg recorded the experience as he popped some Van Halen in the stereo, rocked out, and even prodded Peters, a good sport, to play a little air guitar. The full video is hilarious and can be seen at the Web site where Nyberg blogs, documenting his experiences at http://www.mulletlikeme.com. Nine weeks after becoming a Mulletted American, Nyberg is still a bit stunned that his journey has a following.

“This has grown into a lot more than I expected it to,” Nyberg said. “I’ve found that everyone has an opinion one way or another. They either think it’s hilarious, or they think I’m an imbecile.”

His experiment has included stops in a Wal-Mart (where he said he went entirely unnoticed), J. Crew, a Lexus dealership, and even standing up in a friend’s wedding in New York.

“I admit I’m sort of stacking the deck by going places where I know a Mulleted American will be out of place,” he said. “I’m just amusing myself. If I can get some people to smile a bit, then that’s a coup for me.”

As of July 1, Nyberg had raised $1,320.66 of the $2,500 needed to buy the Camaro. You can donate to help Goodwill get a Camaro to auction by visiting http://www.mulletlikeme.com.