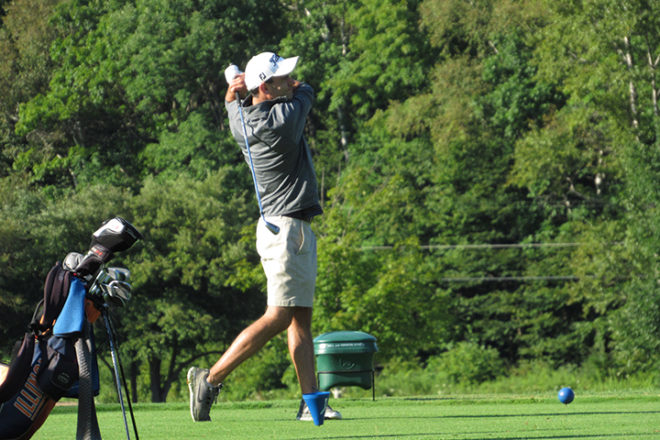 She won her match Monday to square off with Mary Theisen, 75, in Tuesday’s championship match.

“Pretty soon, Betty and I will be in what they’ll call the octogenarian group,” Theisen said after winning her semifinal match.

Chomeau earned first place again Tuesday, Aug. 8 in part because of Theisen having a worse front nine than usual.

“I told her it was her year, but I wasn’t going to give it to her,” Chomeau said. She said one year she was up three shots by the 14th hole against Alyce Green, and gave up the lead and the title. Theisen was playing well on the back and was down four going into No. 14. They tied on that hole, a short par-3, giving Chomeau the match.

Claudia Kasen took third place for the second time in three starts in the tourney.

In the men’s championship bracket, Jack Mulligan, a sophomore-to-be on a University of Rochester (NY) golf team that went to the national tournament this spring, did not need any extra shots but did need an extra hole against a veteran competitor to stay alive Monday.

Joe Thompson, 2001 and 1991 champion, forced that playoff. After watching Monday’s match and as Thompson and Mulligan walked from the 18th green to first tee, defending champion Mark Basch said to Peninsula State Park Golf Course General Manager and head pro Jason Daubner that it seems Thompson’s always in a playoff with someone.

Mulligan, of Flossmoor, Ill., said he had difficulties on the back nine Monday, and Thompson came back to tie it. Mulligan said he played better Tuesday (he guessed he shot 72 or 73) against 2016 and 2003 champ Mark Basch, and closed the deal on the back nine to advance to the finals.

In the group behind him, 2008 champ Toby Peabody was knocked out of the winners’ bracket quickly by Ian Tate, and Chris Tate defeated Rich Thompson. On Tuesday, Ian, a University of Illinois graduate, nearly found the green in two and birdied the par-5 16th hole to beat brother Chris and advance to the finals. 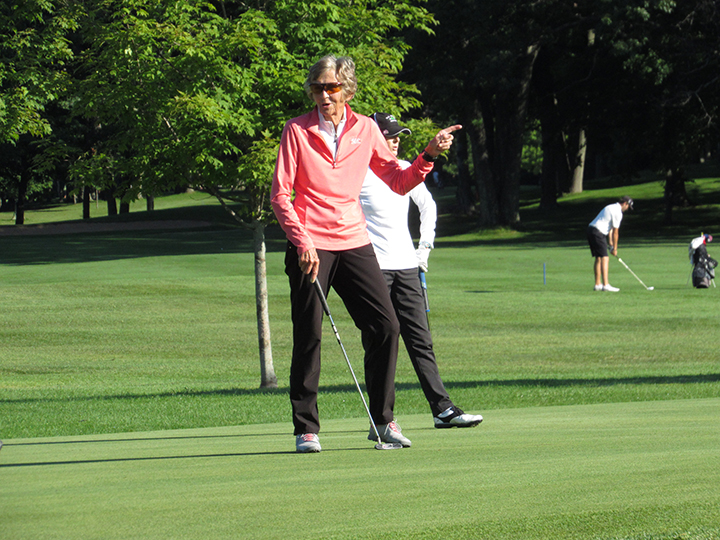 Betty Chomeau, who has won the tournament in five different decades, claimed another victory this week. Photo by Craig Clayton.

In one of the higher-handicap brackets, some youngsters had to take on an elder who has been shooting his age on 18 holes for more than a decade. Rudy Carl, who has a place in Fish Creek, said it’s not hard to shoot your age when you’re 90. Then again, it’s not easy either — and he never moves up to the senior tees.

Carl defeated Chris Komer on Monday on a second playoff hole to stay alive in the winners’ bracket in Class E (no handicaps over 17).

Carl started playing in The Resorters at Peninsula State Park about 70 years ago and still enjoys the tournament and the course.

“You get a season pass here and play with a bunch of guys you know. It’s just fun,” he said. “It’s always nice to play on this course. It’s just a beautiful course.”

He said each year at the tournament, it’s great to see old friends and find out who is coming in for vacation for tournament week. Daubner said this year’s field included players from Door County, Texas, California, Michigan, Minnesota, Florida and Illinois.

Actually, Gillam was in the top bracket with eight other players who either don’t carry handicaps or are in the plus-1 (typical round, 1-under par) to 2 range.

Gillam last won the championship in 1999 and last played in the tournament in summer 2013. He said he didn’t play much for three years but is playing again about two times a week. Why was he back this year?

“Cool air. I live in the Dallas area and it’s been around 100,” he said after losing his first-round match to Basch and falling into the consolation semifinals.

“The people and the beauty of the course. Of course I grew up playing golf here,” Gillam said.

“My mother used to pay $10 for a juvenile (season) pass and she’d drop me off and leave me out here,” said Gillam, who used to play 36 holes, hunt golf balls and “catch shag balls” for the pro at the time, Jane Bielefeldt.

He still was the tallest but not the longest driver in his group that included Thompson, Mulligan and Basch. On the 190-yard, par-3 fourth hole, Gillam wielded a driver, while the “kids” smashed irons.

Daubner said the tournament will no longer be a four-day event with 16-player flights. The tournament always has been the biggest draw for summer vacationers and weeklong tourists, but it wouldn’t hurt to be able to attract some more players. Limiting the flights to eight players with handicaps within six shots of one another should make it more competitive, and will turn it into a three-day event.

This year, if he had grouped the 16 top players into the same bracket, a 9-handicap likely would have been in over his head against a +1.

In Class F, all the players were folks who actually could claim to be “bogey golfers,” all in the 17-18-handicap range.

He said the high school players are hard to draw into the tournament because they’re all busy working. The fact that the women tee off first might make it more attractive to the girls, but still, most are working. He is looking into starting a collegiate bracket, too.

It’s open to all ages. One year a 95-year-old played a 15-year-old, and they had the same handicaps.

Peninsula Golf Association president Keith Kasen said the Professional Golfers’ Association of America (PGA) has been working to attract and inspire more young players, with PGA pro Matt Stottern helping lead well-attended junior golf lessons, by participating in The First Tee program and by building a six-hole short course. He said his wife, Claudia, often comes out to the short course and plays 12 holes after work.

Chomeau said she likes the tournament because it’s the only match-play event, and she gets to see a lot of old friends. Daubner said the great thing about match play is you can have a blow-up hole, like a 10, and shake it off and realize that’s just one point for the opponent. So, you can win with a total score that’s worse than the opponent’s, and one you’d rather not see broadcast to the world.