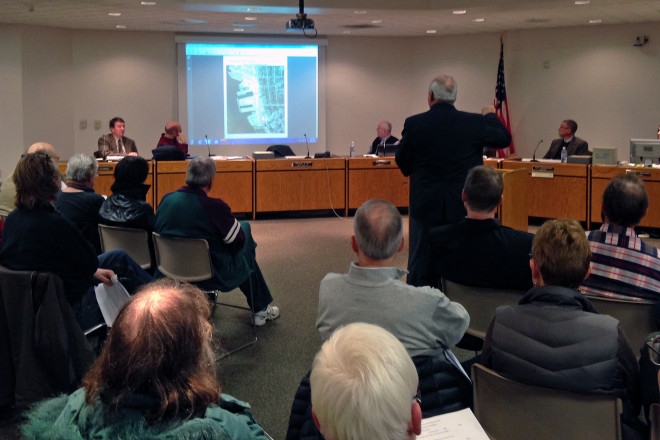 City of Sturgeon Bay: The Common Council is expected to make a decision on closing portions of First Avenue and Jefferson Street at the request of Fincanteri Bay Shipbuilding at its 7 pm meeting on Dec. 15. A public hearing was held on the issue on Dec. 8, at which sentiments were divided between going forward with the plan, considering alternatives and denying the request.

Bay Shipbuilding Vice President and General Manager Todd Thayse kicked things off by explaining that the company wants to purchase the former Palmer Johnson buildings and close the adjacent street that separates the two properties.

“This potential acquisition of Palmer Johnson property would help us consolidate our position here in sturgeon Bay and further our commitment to shipbuilding in the Sturgeon Bay area,” he said.

The hearing turned into an opportunity for neighbors of Bay Shipbuilding to air other concerns about the business, including dust, noise and diesel fumes. Among those speaking in support of the closure were Rep. Joel Kitchens, Bill Chaudoir of the Door County Economic Development Corp., Pam Seiler of the Sturgeon Bay Visitor Center and Door County Board of Supervisors Chair Dan Austad, whose family owns the Ace Hardware are the corner of Third and Jefferson. Those speaking against cited safety concerns, traffic backups, noise issues and the future possibility that Fincanteri could pull out of Sturgeon Bay. Several people suggested the city negotiate a deal with the company to reopen the streets should the company ever close.

Door County Tourism Zone Commission: The group meets at 9 am at the Jacksonport Town Hall.

Town of Baileys Harbor: The town board meets at 6 pm on Dec. 14.

Town of Egg Harbor: The Plan Commission meets at 6 pm on Dec. 14.

Town of Gibraltar: The Ephraim-Gibraltar Airport Commission meets at 9 am on Dec. 17.

Village of Forestville: The Plan Commission meets at 5:30 pm on Dec. 17, followed by the village board at 6 pm.