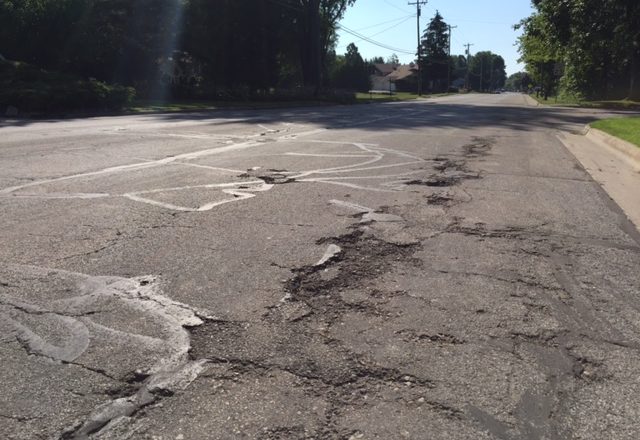 Sturgeon Bay’s streets have deteriorated so badly that the city has convened a special committee to investigate funding solutions to improve them, but streets will get worse before they get better.

City Engineer Chad Shefchick told the Ad Hoc Committee on Funding for Local Street & Infrastructure July 11 that present funding levels require the city to get 50 – 60 years out of its streets, but Mayor Thad Birmingham said that Wisconsin’s cap on municipal property tax levy increases has tied their hands.

“That lifespan gets stretched out more each year as our revenue stays the same,” Birmingham said. “So that 50 – 60 year lifespan could end up being 100 years.”

Prior to 2010, local governments could increase their tax levy by 3 percent of the previous year’s levy. In 2010, Gov. Scott Walker lowered that limit to 0, allowing Wisconsin municipalities to increase property taxes only at the rate of net new construction in the community. So even as the cost of fuel, materials, services, and human resources increases, budgets do not unless there is significant new construction. Levy increases were first capped at 3 percent by Gov. Jim Doyle in 2006.

“How can you keep up with anything – roads, parks, sewer – if you can’t increase revenue to pay for expense increases?” Birmingham said.

In the Town of Liberty Grove the budget squeeze came to a head in 2014, when the town went to its residents to pass a levy limit override.

“We worked on rolling five-year plans for the town to anticipate expenditures,” town administrator John Lowry said. “When we looked out, it was pretty evident that not only were we not going to be able to keep up our roads, but we were going to keep falling further and further behind.”

Voters passed a budget that included an override of $518,159 above the levy cap by a margin of 103 – 24. The town’s finance committee met 12 times that summer to prepare the budget and field questions, and the town held four informational sessions to explain why the override was necessary.

“I think it was pretty eye-opening for the community to see where their tax dollars were going,” Lowry said. “The largest expense in the budget is always the roads, so when you do other projects, and you hit the budget ceiling, where do you get the money? Roads.”

“It’s becoming more and more of a challenge to continue to provide services that people expect without being able to bring in the revenue,” Witynski said.

Door County Administrator Ken Pabich said county government is feeling the impact as well. The county is allowed a levy increase of about 1 percent next year. Pabich said the county has already consolidated departments and continues to search for ways to become more efficient.

“The state gives us requirements we have to provide, but not the funding for them,” Pabich said. “That gets difficult. At some point municipalities are going to have to meet with legislators and come up with a new system.”

But the caps won’t come off anytime soon, Witynski said.

“It’s a non-starter,” Witynski said. “Politically it’s not a viable option to appear to create more flexibility in state levy limits. The majority in power believe that they are in that position because of their ability to limit property taxes.”

The limits are forcing municipalities to find other revenue streams, cut services, or borrow money to pay for basic services. Birmingham said the city has cut four positions since he became mayor, but he won’t borrow funds to plug the gap.

“One consequence of the limits is that it turns municipalities into borrowing junkies,” he said. “To me, borrowing is not the solution.”

“You try to make things more efficient, but you actually make them less efficient because you’re pushing funding into debt,” Pabich said. “You get to a point where you’re putting off things that should be maintained, or your pushing it off onto debt.”

Since municipalities can only raise property taxes at the rate of new construction, governments  are competing for new development to tax to maintain service levels.

“The Walker Administration has put municipalities in a position where they have to incentivize new construction and development to pay for services,” said Sister Bay Administrator Zeke Jackson.

Sister Bay is reaping the rewards of development today thanks to its waterfront park investment that began in 2007. But Jackson said that’s not a forever solution.

“As a function of mathematical certainty we’re all going to end up like Kewaunee at some point,” Jackson said.

In 2016 Kewaunee County had to implement a .5 percent sales tax to plug a gaping hole in its budget that remained even after the county cut 31 positions from county staff and transferred $600,000 from its highway department budget. Kewaunee’s problem was exacerbated when the Kewaunee Power Station closed in 2013, costing the county a lucrative utility fee.

Lowry said Liberty Grove will probably seek an override again in 2018. In Sturgeon Bay, the infrastructure committee is investigating implementing a wheel tax or Premier Resort Area tax to sustain its streets.

They’re likely the first in a wave of local municipalities that will seek overrides or fees to plug budget gaps.