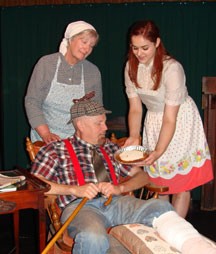 In Ma’s Case: All the World’s a Stage, an actress from a traveling Shakespearean troupe is murdered. Petey has broken his leg busting up a gang of cow tippers, so Ma takes center stage as the sleuth in charge of sorting out the reasonable (and unreasonable) suspects. Can Petey and Ma solve this baffling murder? Can the suspects keep their secrets under Ma’s grilling?

This original murder mystery/comedy was written by Carol Lyons, and is the sequel to The Belgian Detective, which first played to Door County audiences in 2006.

Rogue Theatre is donating 10 percent of the ticket sales from Ma’s Case to the Alzheimer’s Association as a way of honoring a request by Lyons, who has Alzheimer’s and now lives in the Fox Valley.

“Carol and I thank Lola (DeVillers) and Stuart (Champeau) for their generous pledge,” said Tom Lyons, her husband. “As words continue to fade in Carol’s mind, it is gratifying to see her creativity still being enjoyed by audiences.

“People who want to join Rogue in raising money in the fight against Alzheimer’s are encouraged to visit act.alz.org and pledge a donation to Carol’s Troupers in the Walk to End Alzheimer’s, which will be held in Appleton on Oct. 3, 2015,” added Tom.