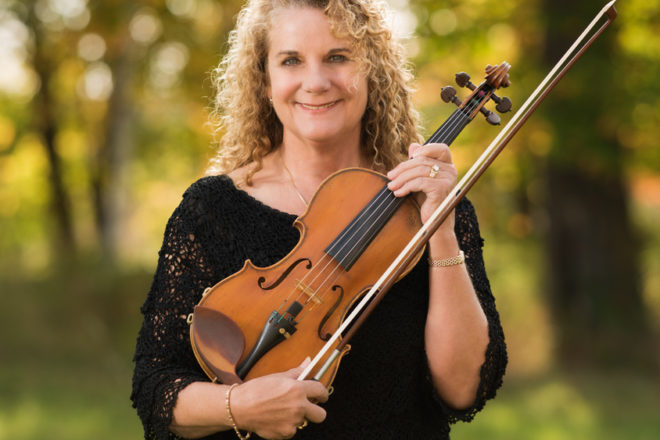 On July 6, the Friends of Peninsula State Park will host a benefit concert at the Kress Pavilion supporting additions to the Nature Center. Providing entertainment is Beth Chafey-Hon, a well known violinist, violist and composer from the area. Called “Songs of Nature,” this program will present original compositions from Chafey-Hon, paired with images of nature scenes from Door County and beyond, including the photography of Tim Erskine, artwork from Edgewood Orchard Galleries and pictures of the California desert. I sat down at a coffee shop with her and chatted about inspirations for the project.

Chafey-Hon grew up playing music in California, and the landscapes from the area continue to inspire her today. She moved to Door County in 2005 and seems to be equally passionate about the scenery here, too.

Her songwriting process began years ago, and many of the tunes she included in this project had been inspired by nature. When she was putting together a setlist for this program, she saw that many of the songs she had written for nature, and for the desert, were applicable to Door County.

Chafey-Hon put on a similar benefit concert in California in February of this year that also employed multimedia aspects. There’s only one song from that performance that she’s recycling for this one. The success of that show inspired her to bring it here.

In all, these songs have been years in the making. She’s spent time composing not only her own parts, but the parts of other instruments as well. She hires out other musicians to fill those roles during the recording process. For the performance, she will play solo on top of the pre-recorded orchestra tracks, which were recorded at STUDIO 330 with Hans Christian, a producer and musician from Sturgeon Bay.

Her scores are written out by hand. She pulled one out to show me, with layers of notes neatly written in pencil — her songwriting process must be meticulous.

And meticulous it is. Chafey-Hon employs similar songwriting processes as Bach, using musical formulas that would be used if one was writing something like a symphony. Her understanding of harmonies goes further than just a basic songwriter, she said.

These songs all act with a theme, she said. Some celebrate the spirituality of nature, while others attempt to tell the story of early pioneers. She’s also been inspired by ethnic folk tunes, and works them into her own songs, especially for ones about Door County.

Music and nature kind of come hand in hand for Chafey-Hon. Though she’s not religious, she walks with the sunrise every day and “puts it out to the universe” to guide her through her day and her creative process, she said.

“I use the spirituality of nature to inspire me to be in music,” Chafey-Hon said. “I think people feel nature; they get inspired by nature the same way they’d be inspired by music.”

Inspiration for sharing her work comes from a good place, too. Most of her concerts are benefits for different organizations or causes. Music becomes something else — even more gratifying — when she’s able to share and give back to the community, she said.

“I love it,” Chafey-Hon said. “That’s like a total passion for me.”

“Songs of Nature” is July 6, 3-4:30 pm at the Kress Pavilion, 7845 Church Street in Egg Harbor. Doors open at 2 pm with a silent auction of Eagle Tower items. Light refreshments will be served. Tickets are $20. Buy tickets at peninsulafriends.org/event/concert.