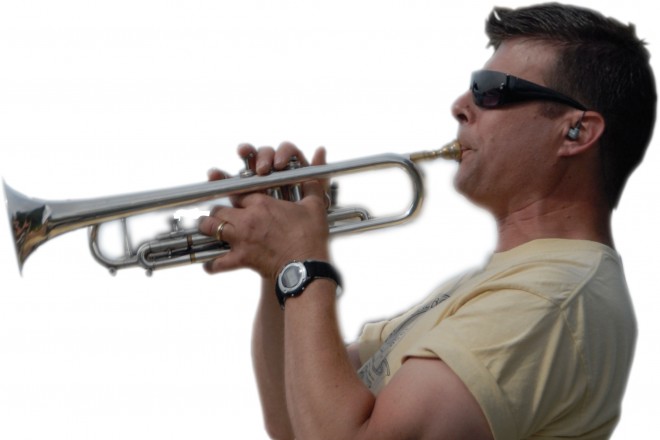 Like Professor Harold Hill in The Music Man, Gibraltar Schools’ music teacher Charlie Eckhardt is leading the parade…and his students are keeping step. Since first walking through the Gibraltar Schools’ music room in 2000, Eckhardt has won the hearts of teachers, students, and parents. With an infectious enthusiasm that radiates through his students, Eckhardt’s influence is clearly evident.

Since assuming the position of music teacher and band director seven years ago, the program has grown from 33 students to 78 in 2007. “Teaching band to 6th through 12th graders is a demanding responsibility,” said Gibraltar Secondary School principal Kirk Knutson.

“Charlie is a tremendously dedicated person. Many of his performances occur well beyond the instructional day and cause most workdays, many weekends, and holidays to be long and challenging. Yet, Charlie has blended his passion for young people and music with teaching,” said Knutson.

“He is my mentor,” stated Gibraltar senior Matt Burress who performs in the jazz, jazz and combo, and concert bands. “Not only is he a great teacher, but he is my friend; I can relate to what he says. Mr. Eckhardt ‘talks’ to me, communicates with me. He’s always fair and a really good guy.”

Eckhardt does not hesitate in crediting his passion for music to his father. “Music has been a constant in my life thanks to my dad. He was self-taught and really got into it; he played in polka bands, lounge bands, wind bands, composed high-brow music and wrote arrangements for dance bands in northeastern Wisconsin. But he also recognized how important exposing his children to culture was. All of my sisters and brothers played instruments growing up. With nine of us kids, we’d have our own family concerts,” laughed the Sheboygan native.

Following high school graduation, Eckhardt and his band performed “gigs” throughout the Midwest. “We played rock and were a pretty classy band. We were living our dream and hoped someone would sign us. But I had to eat,” he said. That realization led to a 5 1/2-year stint in the United States Navy where he learned something about himself that would change the course of his life.

“I was good at training,” Eckhardt said simply, “and when I finished the service, I knew I wanted to teach. So I headed back to school at 28 years old.” Attending Lakeland College, Eckhardt “made the decision I was going to get the most out of the experience. It wasn’t always easy; I worked 40 hours a week and took 16 credits.”

It was his college experience that eventually led to his life in Door County. “I met my wife, Evelyn [Sohns] while we were both students at Lakeland,” Eckhardt grinned. But before receiving the call to head to the peninsula, the new teacher accepted his first position in Winter, Wisconsin where he “questioned the decision I had made. I had to learn to be ‘gentle,’” he explained, “to learn the art of persuasion in teaching.”

Four years later, no longer a novice teacher, Eckhardt’s second placement was with the Plymouth Middle School. “It was definitely a change; I taught 120 students in Winter,” he said. “At Plymouth I taught 225. But sixth, seventh, and eighth graders are my favorite group. Everything is new to them.”

Within a year of transferring into the Plymouth system, however, Eckhardt was moving out and up. “We had been coming up to Door County to visit Evelyn’s family and friends, and she said, ‘Wouldn’t it be great if you got a job at Gibraltar,’” he recalled. “Joel Blahnik who had been the Gibraltar band director in the 1980s encouraged me to apply and I did. But I thought I blew the interview because I told them I was here because of Evelyn.”

But Eckhardt’s credentials won the day and according to his “boss,” it’s been a win-win situation ever since. “From the jazz band performing for an Elderhostel group or a senior citizen holiday dinner, to the pep band and marching band supporting our athletic teams and community celebrations, Charlie rallies parents and students to coordinate literally dozens of instrumental music performances each year,” Knutson related. “Whether at home, in his classroom, or out and about in Door County, Charlie is performing music, listening to music, creating music, speaking about music, teaching youngsters about music, and enjoying the people of our community. Wherever you find Charlie, you will likely find a gathering of music lovers.”

Colleague Mary Bell agrees, saying, “I visit Gibraltar School a couple of times a year and give flute sectionals to some of the younger flute players. Usually, when I walk into the band room to work with the flutes, Charlie has 10 kids talking to him all at the same time and he has the innate ability to answer everyone’s question. I leave the band room exhausted! He has such enthusiasm for teaching and it shows by the way the kids learn and perform. They are very comfortable with Charlie. He has taught them to have fun, but also to know when it is time to be serious, and they don’t cross that line.” From a student’s point-of-view, Burress agreed. “He talks about his own experiences with music, and I can relate to what he says.”

And that down-to-earth approach works in all sectors. “Charlie’s ability to share his life experiences is a quality that makes him unique,” emphasized Knutson. “He talks about his father’s love of music, about growing up in Sheboygan, about playing football, or about being in a rock band. Charlie is a natural storyteller with a wonderful ability to create connections between life lessons and music. Kids find that intriguing.”

Eckhardt takes a humble approach to the students he mentors. “Band is what I do on a regular basis, but you have to make it fun. Teaching is exciting because kids are always changing, evolving. And you have to change and adapt with them. In the end, the hard work is the truest reward earned,” he explained. “I hope I’ve set the bar high enough for the students. My ultimate goal is to make every kid in band realize their musical contribution is valued.”

And when the day is done and Eckhardt heads home to his family, who does he listen to? Smiling, he said, “I don’t. I listen to the ‘chop, chop’ of getting dinner ready. I do all the cooking at home.” That may be true, but he also enjoys jamming with friends. “Our band, Bacchus Lotus, started in 1978 and we still play together when we have time. We’re all second-generation German-Russian boys; we maintain the work ethic. I also make time to play with local Door County musicians and even ex-students who want to join the session,” he said.

Charlie Eckhardt might not have Professor Hill’s 76 trombones to lead the big parade, or 110 cornets close at hand…but he does have the dedication to lead the music and band students of Gibraltar Schools in an appreciation of music and life.

“Due to his love of music and young people, as well as his ability to share time and knowledge, Charlie bonds with kids and adults while collaborating musical goals. Consequently, he is a positive force in Gibraltar Schools and Northern Door County,” Knutson said – a notion seconded by Bell, who added, “The music program has really grown since Charlie came to Gibraltar. He has been and continues to be a great asset to our school and community.”