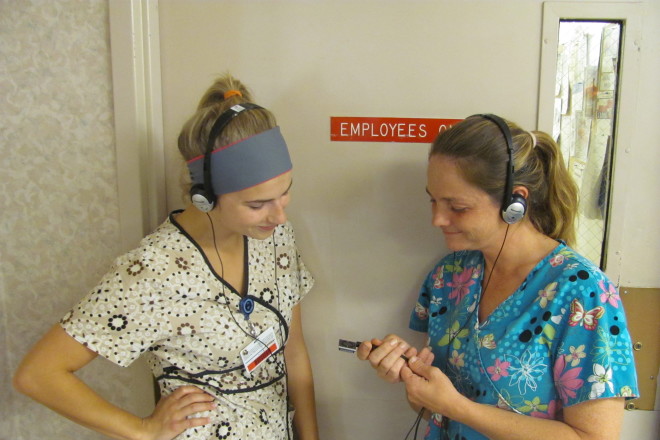 Scandia CNAs Heather Stuth, left, and Karisa Wagner check out two of the iPod Shuffles that are proving so helpful to residents, their families and staff members. Submitted photo.

Patrick Knapp, activity director at Good Samaritan Society-Scandia Village, says participation in the Music & Memory program, begun in January 2014, has produced amazing results for residents with Alzheimer’s and other forms of dementia.

The Wisconsin Department of Heath Services chose Scandia as the Door County site for a program in 100 facilities statewide to demonstrate the ability of music to reduce the need for anti-psychotic and anti-anxiety medications. Scandia Village received 15 iPod Shuffles – small, lightweight units that clip to a shirt or blouse, hold hundreds of tunes and have a battery life of up to 15 hours.

Fifteen residents were chosen for the initial use of the Shuffles. The units came with earphones (and little speakers for those who don’t like earphones), but no music.

Knapp appealed to the residents’ families to provide music that had been favorites in their loved ones’ lives – perhaps even from their own collections. Staff and friends also supplied music, and each Shuffle came with a voucher for iTunes that Knapp has used to fill unmet needs. For instance, one resident who loves the Rosary now has that on her Shuffle. Another has Patsy Cline tunes.

Knapp says that the playlists, individualized for each user, range from the classics to Benny Goodman to Barry Manilow. Shuffle 2, for example, has an exercise mix from Will Smith’s “Getting Jiggy Wit It” to the “Macarena” to polka tunes. Shuffle 6 holds Johnny Cash, Merle Haggard and George Jones, while Shuffle 8 has classical Grieg, Mozart and Bach and Shuffle 9 has opera.

The music is used at Scandia Village in a variety of ways, not only to calm a resident who becomes agitated, but also to help alleviate pain and as a sleep aid. “It works magic,” Knapp says, “on residents who would otherwise have to rely on sleep medication.” The music library that has been compiled also facilitates sing-alongs and exercise classes. And residents, family members and staff have found that music has a wonderfully calming effect on end-of-life care. Knapp estimates that 40 to 50 people have benefited from the program.

The national Music & Memory program is based on extensive neuroscience research. According to musicandmemory.org, ongoing research and evaluation of the program in care organizations shows consistent results:

There is growing evidence that a personalized music program gives professionals one more tool in their effort to reduce reliance on anti-psychotic medications.

“For some residents, the music has reduced the need for PRN (as-needed) medications used to help with anxiety and agitation.”

Michele Notz, Scandia Village administrator, says, “When you think about the importance of music in our everyday lives – we all have our favorite radio station, that one favorite song that brings back a special moment in time, our favorite hymn, that childhood song that we all sing along with – Music & Memory provides a way for us to ensure that all of these can continue as favorites for our residents’ day-to-day activities.”

“The Music & Memory program has found an alternate use as a highly valuable resource in providing comfort to our residents who are dying,” says the Rev. Joy Zakrzewski, Scandia chaplain. “The effect of music on the dying and their loved ones who may be sitting vigil is profound. It provides a sense of peace, gives them something familiar to hold onto as they go through an experience like none other. In a very real way, music is a bridge that spans two worlds and gives the dying the emotional and spiritual support they need.”

Shari Rosenquist, activities assistant, says she’s seen a significant rise in the numbers in the exercise class since they’ve introduced music with an upbeat tempo. And CNA Heather Stuth says, “These little music players have been a lifesaver for the residents and staff. We especially use them in the evenings, when some residents exhibit ‘sundowning’ behaviors and become restless.”

Medicare/Medicaid has recently given approval to the Wisconsin Department of Health Services to expand the Music & Memory program to 150 more sites in the state – evidence of its effectiveness.

Proceeds will be used to bring live musicians to play for the residents in the program every week for a year.

Alive Inside, a film based on the Music & Memory program, won the audience award at the Sundance Film Festival in 2014. For more information about the program or to learn how community residents can help, call Knapp at 920.854.2317.

Program Began With One Man’s Plan for His Future

Dan Cohen had the idea for Music & Memory in 2006 when he realized if he ended up in a nursing home someday, he’d want to take along his favorite ’60s music. With iPods gaining popularity, he thought about bringing new or gently used iPods to nursing homes and introducing personalized playlists. 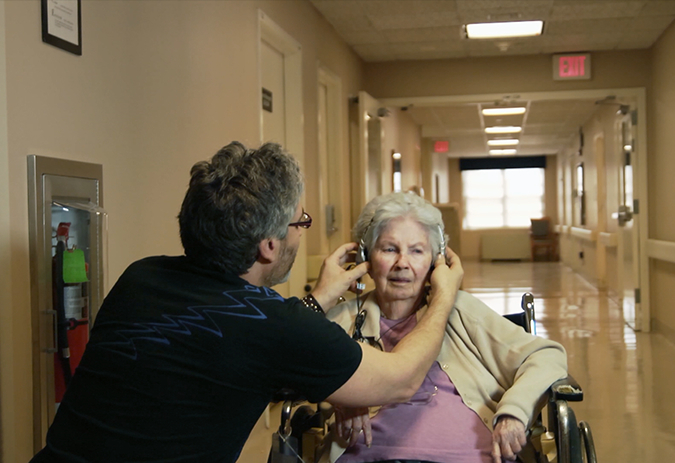 None of the 16,000 nursing homes across the U.S. were using iPods at the time. A social worker and experienced community organizer with a background in high tech, Dan launched a pilot program at a Long Island nursing home. The program was a hit with residents, staff and families, and became the prototype for a bigger effort.

With funding from the Shelley & Donald Rubin Foundation in 2008, Dan brought 200 iPods to residents of four more New York long-term care facilities and tested the program on a larger scale. Successful outcomes spurred the creation of Music & Memory as a 501c3 nonprofit.

While the program gladly accepts donations of any type of digital music player, experience has taught them that elders who have difficulty with fine motor coordination find it easier to operate the iPod Shuffle. It’s simple to use and understand.

In addition, care facility staff have been able to manage multiple iPods in a minimal amount of time by plugging them into iTunes’ auto-update feature. It’s worth noting that iPods are the only digital music players with built-in accessibility features. That’s a real plus for older users. The recommendation of iPods is based on a lot of thought and testing.

For more information, visit musicandmemory.org. For more on Music & Memory, see the 2014 documentary Alive Inside: A Story On Music and Memory.