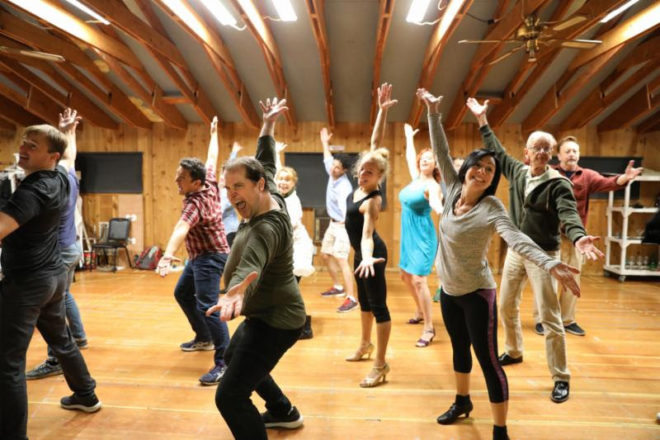 Peninsula Players Theatre will produce the entertaining, Tony Award-winning The Drowsy Chaperone, July 25 – Aug. 12. This silly, yet smart, musical comedy, will delight audiences with its show-stopping song and dance numbers.

The score of The Drowsy Chaperone, by Second City alumni Lisa Lambert and Greg Morrison, lovingly spoofs musicals of Broadway’s Golden Age and is a tribute to the power theater and music have to lighten a person’s mood. As the narrator, played by Greg Vinkler, listens to the recording of his favorite musical, The Drowsy Chaperone, his apartment transforms into a glittering champagne-and-caviar world overflowing with songs, romance, comedy and lively tap dance numbers.

The Drowsy Chaperone’s story centers around glamorous showgirl Janet, the Broadway star of Feldzieg’s Follies, who is on the verge of abandoning her career for her love, the dashing and debonair Robert. As their wedding draws near, Feldzieg tries to sabotage the nuptials to save the show. The Drowsy Chaperone is the winner of five Tony Awards and seven Drama Desk Awards.

The Drowsy Chaperone is performed Tuesdays through Saturdays at 8 pm and Sundays at 7:30 pm, except for Aug. 12 at 4 pm. A post-show discussion will be held Aug. 1 with the creative team and cast, and a pre-show seminar will be hosted by director Matt Crowle on Aug. 3 at 6:30 pm in the theater. For tickets call 920.868.3287 or visit peninsulaplayers.com.