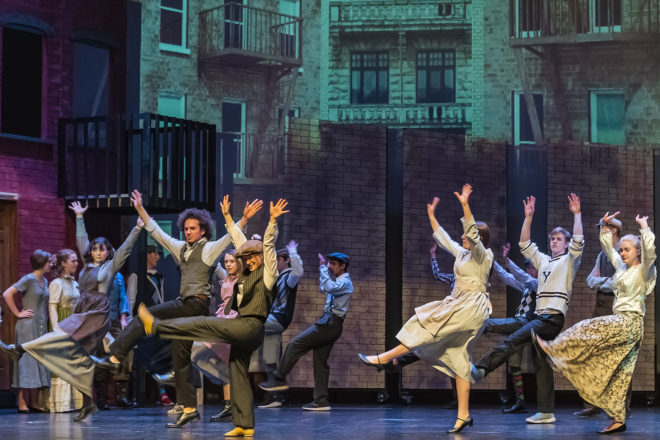 Remember those exciting days a hundred years ago on Tin Pan Alley in New York City when musicians such as Irving Berlin, George and Ira Gershwin and Eubie Blake began their careers as teenagers, plugging their latest songs by hawking sheet music on street corners, in shops and saloons?

No, probably not. But you can experience that excitement next weekend when Gibraltar High School presents the new-fashioned musical comedy Hello! My Baby by Cheri Steinkellner – the recipient of four Emmys, two Golden Globes and many other awards, including the TV Land Legend Award for writing and producing Cheers.

As the Gibraltar School District celebrates its 100th birthday this year, it’s appropriate that Hello! My Baby is set a century ago when our predecessors were not only dancing the cakewalk and singing ragtime tunes, but were also taking a shine to the newly popular jazz and blues.

A few years ago, when Steinkellner directed her daughter’s junior-high production of Anything Goes, she fell in love with “the alchemy that occurs when young voices meet old tunes.” Realizing how many old classics are now in the public domain, she began to scribble the names of songs on sticky notes, stuck them to the wall and moved them around, trying to create a story line. “Then,” she said, “it became wildly clear – these Tin Pan Alley tunes told a story of their own.”

Hello! My Baby is the story of an Irish boy and a Jewish girl trying to make their fortunes as songwriters in New York City … and falling in love along the way. It’s also the experience of immigrants all across our country, then and now, attempting to hold on to as much of their heritage as they can while facing poverty, prejudice, crime and class inequality as they try to become part of their new community.

Hello! My Baby is the 32nd musical directed by Lizz Thomas, Gibraltar’s effervescent kindergarten teacher. “Music,” she says, “was and is the great equalizer that brings joy to all and creates a legacy for our heritage.”

Simon Kopischke plays Mickey McKee, a cocky, aspiring lyricist who hopes to become the next Irving Berlin. The problem? He can’t read or write a note of music. Along comes Betty Gold, played by Monique McCormack – a sweatshop seamstress who’s also a gifted composer. They’re sure their combined efforts will make them rich and capable of saving the orphaned Gold sisters’ Delancey Street Music Hall from the constant threats of Johnny Giovanni’s street gang and from land baron Stanford Tierney, who wants to demolish their Lower East Side tenement block to build skyscrapers.

Things proceed nicely until Betty, who’s every bit as ambitious as Mickey, discovers that, as a female, she can’t join him in plugging their songs on the street.

Resourceful Betty disguises herself as Buddy O’Reilly, a move that’s helpful to her career, but not to her budding romance with Mickey, who,  in a twist worthy of Shakespeare, doesn’t realize that Buddy is Betty.

The plot continues with upper-class snobbery, disgrace, heartbreak, danger, possible ruin and changes of heart. In the end, of course, it all works out just fine.

As a Broadway World review says of a Los Angeles production, “In the last scene, Mickey sees Betty for who she is, love wins the day, the kids save the neighborhood, songs get published, dreams come true and a cracker-jack sing-along brings everyone together.”

Performances are Friday, May 3, 7 pm; Saturday, May 4, 7 pm; and Sunday, May 5, 2 pm, all at the Door Community Auditorium. Tickets are $5 per student and adult 62 and older; $10 for other adults. Theatergoers may purchase tickets in advance at the DCA Box Office or before each performance.

Lizz’s wish is that attendees will leave the show with smiles on their faces, a song (or several) in their hearts and great appreciation for those who came before us.

Tin Pan Alley was a section of West 28th Street between Sixth Avenue and Broadway in New York City that was home to a collection of music publishers and songwriters at the start of the 20th century. The occupants of that stretch of buildings – where creative juices flowed – helped launch the careers of Scott Joplin, George M. Cohan, Irving Berlin and many others.

Over the years, the buildings that constituted Tin Pan Alley were used for loft spaces, tech firms and more, and with the rise of development in the area, Tin Pan Alley came under threat of demolition for hotel and high-rise development.

The 29th Street Neighborhood Association formed in 2010 to “… help protect and foster the quality of life for the residents living in the area composed of 24th Street to 33rd Street and from 8th Avenue to 1st Avenue.” One of its two landmark preservations includes saving Tin Pan Alley. According to its website, “28th Street between Broadway and Sixth Avenue in Manhattan contains the remnants of one of America’s greatest cultural movements. These buildings should stand as a reminder to future generations of how a legacy can originate from one small pocket of New York.”

As of March 12, 2019, New York City’s Landmarks Preservation Commission has started reviewing the buildings to determine whether they should be protected from development.