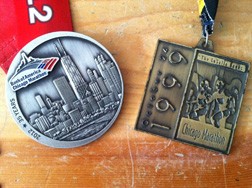 I passed him a bit beyond the 22-mile marker. The man, maybe in his mid-20s, was sitting on the curb on the east side of the road, just a few steps before the turn by Comiskey Park. He hunched forward, his hands dangling over his knees like undercooked noodles hanging over the edge of a ladle, the exhaustion dominating his face overshadowed only by the helplessness shown when he hurled vomit between his legs.

I wished I were in his shoes at that moment. He had an excuse – he could stop and there could be no questioning him. I wanted that. My legs were seizing up again, my steps labored, the burn now going to levels I hadn’t felt before. My right foot throbbed with each step and no tweak in my stride seemed to chip at the pain for more than a footfall or two. I was now talking my legs forward.

My hamstrings tightened seven miles ago, feeling as though they were balling up, one false stride from popping. My calves pulled taught by mile 18, when I stopped to stretch them and risked a quad stretch, reaching down and back to grab my left foot and pull it up as I held the street sign with my right hand. A moment later my right calf scolded me viciously. I nearly tumbled to the concrete of the sidewalk. I stifled my cry, allowed myself a quick moan, then looked around to make sure nobody was rushing toward me.

The pain brought a new sweat down my forehead, and I put my hands on my knees, dropped my head, and contemplated bowing out.

“Give it another mile,” I said to myself. “Walk a bit, the reprieve is coming.”

For the first time I had hit the wall, or the wall hit me. I was in the midst of a first – my bad race.

At mile 14 I felt fantastic, cocky even. This was my second marathon, and my second with a few months of shoddy training. I had squeezed in just enough long runs (one 20-miler, a couple in the 13 – 18 range) to believe a decent finishing time was within reach. When I crossed the halfway point at an 8:20 pace, I felt I could pick it up and maybe cut my time down from last year’s 3:46 into the 3:38 range. I remember laughing a bit at how lucky I was to get away with this as I passed people struggling along after months of rigorous training.

The running gods heard my laugh, saw my cocky stride, and two miles later they punished me with bolts of lighting to my quads.

“I can still beat four hours,” I thought, all the way up to mile 24. But the final two stanzas were a brutal war of attrition waged between my mind and my legs.

I jogged a while, then the legs died again. Soon, I couldn’t pre-empt the cramping and I would seize in mid-stride, yelping quietly as I swerved right. At 25 it happened so suddenly that I couldn’t even look around to avoid other runners, I simply veered, painfully, to the curb. I cut a man off who had no sympathy. He pushed me from behind, “Hey, watch it!”

I’d have cursed him if I could have, but I reserved my anger for my legs. My lungs felt great, my mind knew I could beat 4, but my legs had an axe to grind.

I choked up. I thought about Bo Johnson, a boy who spent a year in far greater pain than this before he died just nine days earlier. I can handle this, at least. That got me a few steps farther.

I thought of my sister Christine, running a marathon after giving birth to six kids and battling herniated disks. She would be on this course nearly an hour longer than I. Again, “I can handle this,” I reasoned. A few more steps.

Finally I thought of a promise I made to my sister Barb 13 years earlier. For a year I had struggled to rediscover myself, to find my footing after my best friend had come home from his summer semester at UW – Madison late one July night and shot himself on his parents’ doorstep. Fifteen months later my sister willed herself to the finish of the 1999 Chicago Marathon, her first, an accomplishment I saw as entirely unrelated to my struggle.

When she came home a couple of weeks after the race she gave me a note, along with her Chicago Marathon finishers’ medal. She told me that so often throughout her training she had thought about my friend, and about me struggling to put my loss in its place. In spite of all of her own battles she was fighting as a young career woman in the city, she had taken thousands of steps thinking of me and my late friend.

There are no turning points when one recovers from the trauma of loss, no day after which the rest are all sunny again. But there are moments to build on, moments that become the bricks and mortar as you reconstruct yourself. On that day my sister reminded me that, though I had lost someone I’d never replace, I remained an extremely lucky young man, with an army of incredibly strong brothers and sisters to lean on.

When she gave me her medal, I promised her that one day, I would get her one in return. I didn’t think it would take 13 years.

I signed up for this marathon shortly after I moved here. It took me a long time to move on from my friend’s suicide, and even longer to get here, to Chicago, where I always thought I would end up. Training for this race had helped me get to know my new home. I guess I saw this race as a sort of finish line for that part of my life. Now here I was, a couple of miles from it, and I was close to quitting. I could walk it, I knew. But I also knew I could handle a little more pain if I ran, if that’s what you want to call the stunted strides I was taking in miles 25 and 26.

When I finished my first marathon last year in Green Bay, I was somewhat underwhelmed by the experience. It wasn’t as hard as I thought it would be. It didn’t seem worth the praise, worth the medal, worth calling myself a marathon finisher. I trained for just nine weeks then, prodded by my brother-in-law’s dare, and felt as though I had dodged a bullet that day.

I finished the Chicago Marathon nearly 17 minutes slower than my first marathon in 2011, but there’s no doubt which one I’m more proud of.