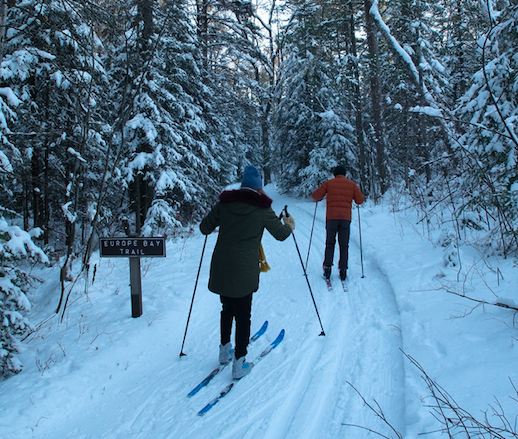 The freshly fallen snow was great for fresh skiers Celeste and Jordan. Photo by Sam Kersebet.

I’ve lived in Wisconsin most of my life and have vacationed in Colorado, but somehow I had never put a pair of skis on my feet.

My family has never been into winter sports except for the occasional tubing, ice fishing and ice skating at our cottage on Lake Winnebago. I wasn’t even that good at ice fishing – I stepped into a hole once and had to sit out for the rest of the day. I’ll try that again some other time.

Skiing was never part of my family’s agenda, but now that I live in Door County, it seems like a necessity.

One day I left work early with a coworker and picked up my boyfriend to catch the last bits of sun at Newport State Park – my favorite of the county’s five state parks. I was instantly mesmerized by the fresh layer of snow that draped the trees. The trails were fluffy and ready for our skis.

Putting them on was a challenge I wasn’t expecting. It took me about a million tries with each foot to click into the skis, and I almost fell over while doing so. It was funny, but I was also secretly very frustrated.

Ten minutes later, we started down the Europe Bay Trail. It took me a second to get the motions right, but soon it felt as though we were gliding down the trail.

And then I fell. Man, was it hard to get back up. It didn’t help that I was laughing so hard.

It was about 4 pm when we began, so the sun was hitting the tops of the trees, and we knew it’d be gone soon. Another person on the trail suggested that we catch the rest of the sunset up on the other side of the trail, which hugs Lake Michigan.

We turned around, crossed the street and hopped on to the trail that picks up on the other side. Soon we were on the beach, admiring the sunset before us. We glided along the lake with the most spectacular view, and it’s safe to say that was my favorite winter moment so far.

We latched on to the Hotz Trail for our trip back along Europe Lake. That part of the trail was more of a straight shot, so I tried focusing more on my technique.

I found that anytime my ski left the groomed section of the trail, I was likely to fall over. The ski would undercut the snow, causing the weight of the snow on the ski to throw me off balance. It was also hard to use both of my arms at the same time to propel me forward unless I was going downhill.

My approach was to stay on the groomed sections as straight as I could. Is there more to it? I really don’t know, but I felt like I got the hang of it.

Eventually we reached the road again, so we hopped back on the Europe Bay Trail as we had started. It was dark by this point, so we strapped on some headlamps and continued on our way. I also had to unzip my jacket because I was definitely feeling warm.

It was fun to ski in the dark. I fell behind the group most of the time, so it felt like I was skiing alone during some parts. It could have been spooky, but I was so focused on my feet that it didn’t feel that way. The quiet was so peaceful, and before I knew it, we had finished the loop.

It was great to finally put on a pair of skis and enjoy the freshly fallen snow, even though I fell a few times. I can’t wait to do it again.

Check out Celeste’s skiing adventure in a new video produced by Peninsula Filmworks, available now on doorcountypulse.com or on Youtube – just search for Door County Pulse!