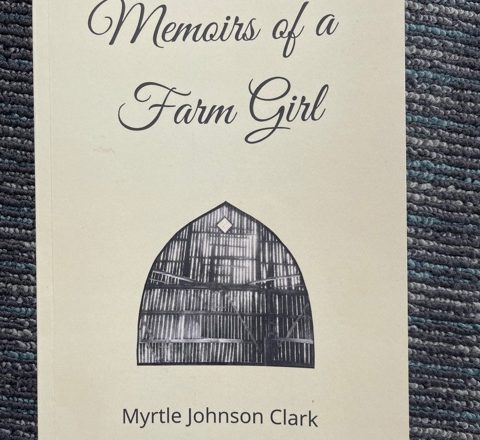 Myrtle Clark, 93, recounts her youth in her newly published book, ‘Memoirs of a Farm Girl’

On her 90th birthday in 2018, Myrtle Johnson Clark went zip-lining. This year, when she turned 93, she published a book. Zip-lining was on her bucket list. Writing her memoirs definitely was not, but spiritual urgings (and frequent reminders from her daughter, Judy) compelled her to finally put words on paper.

Myrtle, the oldest of four daughters of William and Anna Becher Johnson, grew up on the 80-acre farm on Maple Grove Road where she lives today. Except for nursing training in Wauwatosa and the years when she worked at a hospital there, the house on Maple Grove has always been her home. Memoirs of a Farm Girl is the story of her life from childhood through high school at Gibraltar.

“I sort of filled in for a boy in many ways with farm chores, while as a girl doing household chores,” she wrote. “I knew nothing else so had no complaints or grievances. That’s just the way it was. I never really cared to play with dolls anyway.”

Things she did care for included her first dog, Pooch. “Dogs after that were no match. I grieve for him now … maybe, too, for the then-carefree lifestyle.”

Myrtle loved to climb, and she never outgrew her love of heights. A true, later-in-life story that’s not in the book is that she helped to shingle the roof of Calvary United Methodist Church in Egg Harbor.

That calling to high places showed up early. When she was two, her dad looked up from the bottom of the silo to see her perched on a ladder at the top. Occasionally, her climbing was also a bit sneaky, like when she devised a way to get to the onion concoction her mother made to treat colds and stored on an upper shelf in the pantry.

“It was quite good,” Myrtle recalled.

Winters were cold. On Feb. 9 and 10, 1933, the wind chill was 88 below zero. Myrtle remembers sleeping in her clothes and, when she was very little, sitting in the oven of the heated cook stove.

Aunt Mable Steffen made each of the girls a new dress for Christmas each year. Other than that, they wore hand-me-downs from family and friends. After church, they put on the school dresses they’d wear for the rest of the week.

Clothing was not abundant, but there was always plenty of food – mostly raised and canned on the farm, with many of the fruit jars found at the dump. Extra milk went to the cheese factory at Maple Grove and County F, and Myrtle and her dad fished to put a variety of protein on the table.

The family always had transportation: “cars that were top of the line of those found on the bottom of the line. Floorboards weren’t always totally intact.”

The Johnsons’ radio “sometimes worked, sometimes not. Daddy liked the news; Joe Lewis, the boxer; and Ernie Pyle, war correspondent. This was a time when no one interrupted for any reason.” The family enjoyed playing cards and singing around the reed organ.

Myrtle has kept childhood treasures – bird picture cards, fossils, an arrowhead and charms that came with penny candy – in a miniature cedar chest that her mother gave her.

Bernice Sorenson was the teacher for Myrtle’s first two years at Maple Grove School. Violet Rudie taught grades three through six, and Ed Anderson (who could wiggle his ears) taught grades seven and eight. Myrtle remembers much memorizing for programs there and at Zion Church, where she’s been a lifelong – and now the senior – member.

“The first day of high school was scary,” she wrote. “How I dreaded freshman initiation. When my name was called, I could barely make it up the stairs to the stage. I was asked to tell what I thought of the boys at Gibraltar. I hardly talked to boys. I would have preferred rolling a potato across the stage with my nose.”

The 191-page book has 240 pictures. Many of them – ice skates that clamped on to shoes, a bottle-capping machine, kicking chains for milk cows, a weight scale for grading eggs, a toy composed of a spinning button on a string, flat irons, a hectograph, a hand-operated planter for corn and potatoes, a creosote lamp (probably considered carcinogenic today) and a curling iron heated in a kerosene lamp – will stir memories for those of a certain age and create curiosity in those who’ve never heard of such things. The book is also full of references to dozens of family members, friends and Door County old-timers.

“These things I have valued,” Myrtle wrote. “I have not felt deprived. There were some items in my baggage when leaving home … things I would rather not have carried but still had to deal with eventually. But the baggage should not be only the negatives – insecurities, disappointments, guilt, failures. The bag should be lightened, balanced by joys, lessons learned, hopes and dreams, aspirations for a life of purpose and fulfillment, gratitude for opportunities and blessings given, for love and contentment.”Memoirs of a Farm Girl is available on Amazon for $14.99.