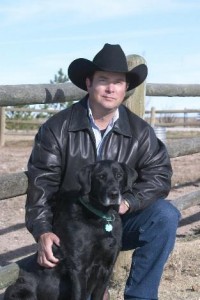 When I first met C.J. Box at a Washington, D.C. mystery conference in 2001, he was wearing a black cowboy hat and looking a bit like a deer in the headlights. His first book, Open Season had garnered high praise: Winner of the Gumshoe, Anthony, Barry, Macavity, and Edgar awards as well as being listed as a New York Times 2001 Notable Book. And the poor guy still looked a bit shell-shocked – I told him then he should probably get used to it because if Open Season was any measure of his talent, he was going to be in for quite a ride. And now, some eight books later, the ride continues.

Open Season introduced Joe Pickett, the Twelve Sleep County, Wyoming Game Warden. At the beginning of the book, he has only been on the job a few weeks, but has already made a name for himself by arresting the governor for fishing without a license. And then a local hunting outfitter ends up murdered near Joe’s home. Other murders follow and Joe digs in, determined to find the killer and save the endangered Miller’s Weasels living in his woodpile.

Joe Pickett is a classic anti-hero. He seems a bit dense, but isn’t. He seems to be a caring husband and father, and is. He’s an average kind of guy – decent, some might say, but underneath it all is the kind of courage it takes to look the bad guys in the eye and shoot. At one point in the third book in the series, Winter Kill, Joe presses the muzzle of his shotgun against a man’s ear – a guy that has been less than truthful in the past. “If you don’t start telling me the truth, and I mean every bit of it, things are going to get real western real fast.” Joe Pickett is not a man to be messed with.

When Box wrote Open Season, he didn’t know he was beginning a mystery series; he wanted to explore the issues facing his part of the country. A Wyoming native, he wanted to write about the Endangered Species Act – not taking one side over the other, he wanted to present a balanced picture of the real impact of the legislation. Other books in the series often address the clash between locals and the “new riche” who come from big cities and have no respect for the land or the people who live there. Environmental extremists, survivalists, thoughtless hunters, and faceless bureaucrats have populated other books.

In a Booklist interview, Box said “It’s not that I’m not trying to take a side, or that I don’t have an opinion, because I do, but most of these issues are way too complicated to come down on one side across the board. I tend to present characters whose opinions are the extremes, and let the reader and Joe Pickett decide.”

Issues aside, C.J. Box writes clearly and lovingly of the area in which the books are set. Outside Cheyenne, Wyoming, near the Wind River Indian Reservation, even this city kid falls in love with the land. This from the newest in the series, Blood Trail:

“As the sun raises its eyebrows over the eastern mountains, I can see the track through the still grass meadow. It happens in an instant, the daily rebirth of the sun, a stunning miracle every twenty-four hours so rarely experienced these days by anyone except those who still live by the natural rhythm of the real world, where death is omnipresent and survival an unfair gift. This sudden blast of illumination won’t last long…”

But it’s not just the sense of this beautiful place, but also the people that inhabit it that come alive on the page. Joe Pickett’s love of his family, wife Marybeth and daughters Sheridan and Lucy, is always apparent and the characters are nicely drawn. They play prominently in some books and recede to the background in others. And then there’s Nate Romanowski, master falconer, friend, and occasional lawbreaker – a man who believes in justice whether it’s legal or not.

When Blood Trail is published in May, it will be the eighth book in the series. It’s elk season in the Rockies and a hunter is stalking a brand new type of prey – big game hunters. Box’s love of the land is apparent as always and the story is riveting. But it’s the characters that had me from the first line. They’ve grown much more complex over the course of the series. And for the first time in the series, Box employs multiple points-of-view, intermittently bringing us inside the head of the killer. Frankly, I’m not usually interested in the killer’s point of view and would prefer not to know what goes on in there. However, C.J. Box does a brilliant job of making this particular killer almost, but not quite, sympathetic. The quote above is from the mind of the killer. Surely someone who experiences the sunrise with such joy can’t be all bad… 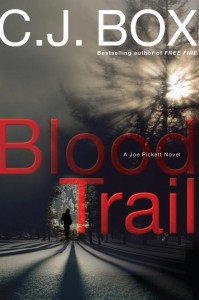 If you’ve never read this series, I suspect you’ll enjoy the ride – somehow it makes the blue sky on a spring day in Door County all the more appreciated.