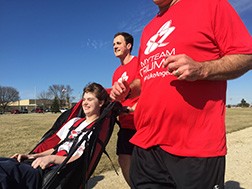 Like many of those running in this weekend’s Door County Half Marathon and Nicolet Bay 5k in Peninsula State Park, Kayla Kudick signed up for the race “to try something new.”

But for Kudick, a 17-year-old senior at Southern Door High School, that’s not as simple as it sounds.

Kudick was diagnosed with cerebral palsy in sixth grade, making it difficult for her to walk or run significant distances.

But she’ll be the first competitor to leave the starting line in this Saturday’s Nicolet Bay 5k in Peninsula State Park thanks to myTEAM TRIUMPH, a nonprofit athletic mentoring program created for people with disabilities who would normally be unable to participate in endurance events.

Teams of “angels” help people (captains) complete races by pushing them in specialized wheelchairs, pulling them behind bikes, and swimming with them in rafts to complete half marathons, triathlons, cycling events and endurance events short and long.

Christian Jensen, his wife Tiffany, and their friend Mary Cox started the Wisconsin chapter of the organization five years ago.

Jensen was a physical therapist for Bellin Health and Fitness in Green Bay when his first client, Mary Cox, arrived. Cox suffered from muscular dystrophy and had already lost most of the use of her arms and legs. They talked about the Bellin Run, and Cox mentioned that she always wanted to run it, but couldn’t because of her disability.

At church the week after talking to Cox about the Bellin Run, Jensen and his wife watched a video of the story of Dick Hoyt. Hoyt has run the Boston Marathon pushing his son, Rick, 32 times.

Rick was diagnosed a spastic quadriplegic with cerebral palsy at birth, but loved the freedom and energy that came with being part of a race.

Learning about Team Hoyt “was an ‘a ha’ moment for us,” Jensen said. “We decided we were going to help Mary do the Bellin Run.”

After helping Cox complete the Bellin Run, word about the organization spread quickly. More disabled individuals reached out to Jensen wanting a chance to move beyond confinement to do what most of us consider routine. 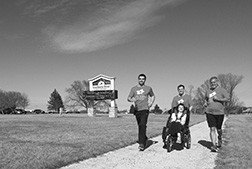 Southern Door High School senior Kayla Kudick will take part in Saturday’s Nicolet Bay 5k as part of the Door County Half Marathon in Peninsula State Park. Kudick, in wheelchair, will complete the race with help from MyTEAM TRIUMPH and her three “angels” (from left to right) Andrew Lindsay, Blake Higley, and Patrick Hartel. Submitted photo.

Fortunately, dozens of people also contacted Jensen asking how they could help these participants complete the race by being an angel.

Cox has participated in more than 100 races since that first run with Jensen and other angels, including the Fall 50 in Door County. More than 2,000 angels have helped more than 500 captains complete races throughout the region and the country.

Cox remains confined to a wheelchair, but her health has come a long way since Jensen first met her.

“Her physical health can’t improve, but her emotional and spiritual health has improved greatly,” he said.

The captains, Jensen said, aren’t just getting pushed around.

“They’re definitely athletes,” he said. “They’re out there for two to three hours, or in an Ironman for 17 hours. It’s definitely a challenge. They’re hungry, tired, have to go to the bathroom. It’s a challenge for them too – a different challenge – but they have the same desire to make it to the finish line. They have to persevere in their own way.”

Kudick said that participation brings her a sense of normalcy.

“It definitely makes me feel a part of things, like I can feel free and can do things like everyone else,” she said.

“Kayla’s an incredible advocate for herself,” said Southern Door Counselor and myTEAM TRIUMPH volunteer Becky Brecklin. “She initiated this whole thing. She came to me about a month ago to see if we could help her participate. We’re excited, and she’s super excited.”

Brecklin said the organization’s mission grabbed her from the start.

“The camaraderie between the captains and the angels is incredible,” she said. “To hear what it does for our captains is extremely energizing. It’s not something they’re used to experiencing.”

On Saturday, Kudick will start with the help of her self-selected angels: her uncle Patrick Hartel, her adaptive physical education teacher Blake Higley, and middle school physical education teacher Andrew Lindsay. They will guide her through the course in a specially designed wheelchair, and she’ll experience Peninsula State Park in a way that thousands take for granted every day.

“She’s had a lot of ups and downs,” said her mother Bernie. “But she’s going to remember the good days more than the bad days. It makes me feel so proud to see her do this.”

Learn more about myTEAM TRIUMPH and how to become an angel, or to donate, at myteamtriumph-wi.org.