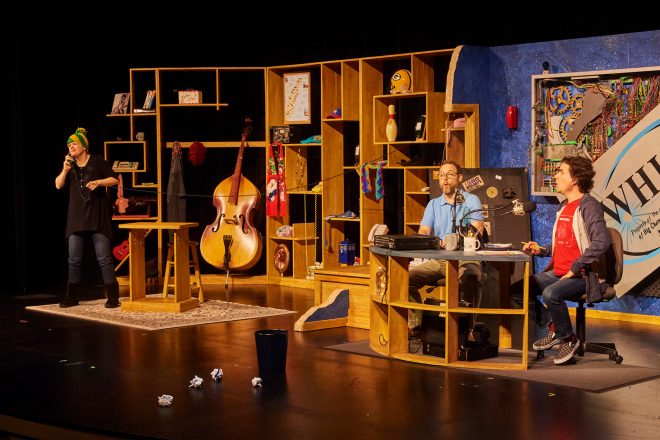 When I was in college, a good friend of mine had a folk-music show on the college radio station at 9 pm, the second-to-last time slot. I would join him in the studio each week, and we would chat during the songs.

When the next DJ would fail to show up for the 10 pm time slot, which happened almost every week, my friend and I would take the last hour of the night to do an improv comedy talk show, where the host, my friend, would introduce me as a guest – with an often challenging name and occupation – whom I would have to embody on the spot.

There’s something about radio that lends itself to imaginative play. Maybe it’s the larger-than-life personalities, or the fact that it’s an audio-only medium. Regardless, it’s a fun setting with comedic potential. Think about Frasier Crane’s radio show and the antics that ensued with each caller. Naked Radio fits the mold perfectly.

The show takes place on a stage split down the middle. On one side, we see the inside of the WHLO radio station’s broadcasting studio. On the back wall, looming over the studio, is an imposing, silver box that receives the daily signal from the WHLO corporate overlords who have recently acquired the station. Seated at the audio board is Bart Dunwood, played by Chase Stoeger. Bart is not a DJ – he’s a “technician”: a new title handed down by the corporation that now controls the station.

When the play opens, Bart has become disillusioned with his position, lamenting that all the energy and life that his father and grandfather before him had brought to the station had been sucked out in recent years. Looking forward to cutting his shift short, however, for a dinner date with his girlfriend, Maggie, played by Molly Rhode, Bart leaves the station in the capable hands of the new hire, Mike Young, played by Andrew Crowe. After all, all Mike will need to do is watch the green light that indicates the silver box is still working, and answer the red telephone if the light goes off. The box will take care of everything else. (I should mention that this is Crowe’s first show with Northern Sky, but you would never guess it. He’s a breath of fresh air and suits the company very well.)

On the other side of the stage stands an intricate series of shelves, all adorned with props, telephones and costume pieces that Rhode uses to play every other character in the show. She is a tour de force, moving from one shelf to another, changing hats, postures and voices to bring the small-town citizens she plays to life.

Just before Bart can depart for the evening, the silver box breaks, leaving Bart and Mike with no content for the airwaves. Worse yet, a blizzard has rolled in, leaving them stranded at the station. With no music, no advertisements, no weather or traffic updates, and no one coming to fix the box for at least 24 hours, Bart and Mike must fill the air with information and entertainment because their station is the last one left on the air as the blizzard rages on.

Naked Radio is incredibly entertaining, and Stoeger, Crowe and Rhode are immensely talented. Rhode performs more than a dozen distinct characters, often switching between them at a moment’s notice.

All three actors also play their own instruments on stage, with Stoeger and Crowe using guitars, fiddles, a washboard, kazoos and all manner of other instruments to perform the musical station-identification jingle, segment introductions and newly written advertisements for upset clients. Rhode joins in on several of these songs herself to portray townspeople calling in for segments, to deliver weather and road updates, or simply to fill out each number on her upright bass.

That being said, Naked Radio is not a musical. (Well, it is for one song, but that’s it.) Almost all of the music in the show is diegetic, which means the characters are playing and singing “for real,” and everyone can hear them. In contrast, in a musical, the songs are usually non-diegetic, which means the characters don’t know (or find it odd) that they’re singing or dancing.

All of the music in Naked Radio is performed live, on the air, for the listeners to hear in their homes – again, save for one number. (It’s an interesting choice, and likely one that most people won’t dwell on.)

The only song that isn’t performed live, on stage, comes from the B side of the last remaining vinyl record in the studio, The Possum Trot. The song sounds exactly like you’d imagine, given the name, and I think it should be Door County’s anthem.

Naked Radio has a simple premise, and the fun of the show is seeing how far the actors can push that premise into absurdity, with each new song and segment one-upping the last. Rhode’s characters return and evolve, giving the audience many short stories to follow alongside the antics of the two actors across the stage from her.

The best song of the show comes just before intermission, when one of Rhode’s characters, Misty, recounts the entirety of Doctor Who, episode by episode, by playing on an Omnichord, of all things. My favorite moment, however, comes near the conclusion of the play, when Rhode crosses to the other side of the stage for the first time, only to have to run back to play yet another character, breaking the fourth wall in a way that is sudden, absurd and incredibly playful.

Naked Radio will run for more than 60 nights until Nov. 6, which is one of the longest runs in Northern Sky Theater’s history. It’s a good thing, too, because this is a high-energy, fast-paced romp that’s well worth a second viewing.

To find out more and purchase tickets, visit northernskytheater.com.