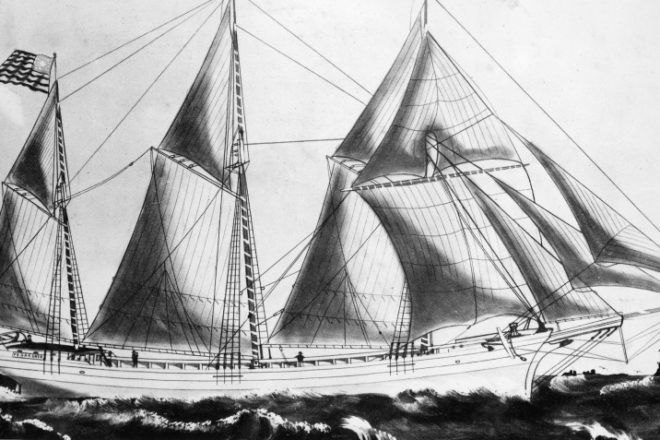 The ‘F.B. Gardner’ was built in Sheboygan in 1855 and underwent three renovations before it caught fire and sank in Lake Huron in 1904. Rendering from greatlakesvessels.org.

If you were to page through the 1896 edition of the Commemorative Biographical Records of the West Shore of Green Bay, you would find that many of those listed as natives of the region worked at one time for lumber baron Freeland B. Gardner at the lumber yard he opened in Pensaukee in 1850, or at the rooming house he built for his workers.

During his time in Pensaukee, Gardner employed 150 men at his mill, which was capable of producing 90,000 feet of lumber daily from the 30,000 acres of Gardner’s timberland along the Pensaukee River. For many years, Gardner’s Pensaukee mill was the leading lumber producer in northeastern Wisconsin, if not the entire state.

When Gardner attempted to grow his business by buying property in both Marinette and Menominee, he was rebuffed by locals so turned his sights on the other side of the bay. On October 18, 1854, Gardner bought the old homestead of Door County’s first pioneer, Increase Claflin, in an area of Little Sturgeon that was known as Chickatock (it was listed as such in the 1859 List of Post Offices in the United States). 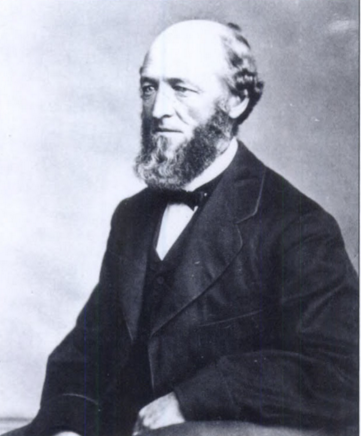 At that site, Gardner built a steam mill capable of sawing long timbers for bridge construction and shipbuilding. The operation was up and running the fall of 1856. Gardner also started building ships to haul his lumber and eventually built lime kilns to process lime from the lakeshore cliffs. Lime was badly needed in Chicago to help rebuild that city after the great fire of 1871.

Gardner eventually employed about 400 men in the various enterprises he had going in southern Door County.

“This Mr. Gardner, who built and operated these lime kilns, was one of the most remarkable men who have come to Door County. Little Sturgeon Bay has once more lapsed into its primeval peace of reeds and rushes and sloping meadows, but in Gardner’s time it was by far the busiest place on the peninsula,” wrote Hjalmar Holand in his 1917 publication The Golden Age of Little Sturgeon, Door County, Wisconsin.

Holand wrote that Gardner also built a grist mill — the first in the county — and then a rooming house for the area farmers who brought their grain to his grist mill. He also built a three-story store “filled with all manner of implements, merchandise, vehicles and farm machinery needed in a new country,” Holand wrote.

By 1868, Gardner had added a lath and shingle mill that could produce 80,000 shingles a day to his Little Sturgeon holdings.

About 100 men were employed as Gardner’s shipbuilders, and Holand claims at least eight ships were built there. He indicates one of those ships was the F.B. Gardner, but other sources say the F.B. Gardner was built in Sheboygan in 1855 and underwent several reconfigurations during its life. It began as a brigantine (two masts), was converted to a bark (three masts) in 1866 and to a schooner (two or more fore-and-aft rigged) in 1872. On September 15, 1904, it caught fire and sank near Sanilac, Michigan, about two-and-a-half miles from shore in Lake Huron.

Gardner was born July 30, 1817 in Elbridge, New York. At age nine he was sent to live with his brother-in-law, Col. John Hillibut, in Fort Ann, New York, where he remained as a clerk in Hillibut’s store until he came of age and set off on his own as a merchant in Pattens Mills, New York.

In 1839 Gardner moved to Chicago, but it was for a short time, for he soon received a business proposition that brought him back to New York, where in 1841 he married Fanny Copeland. They had a son and two daughters (son Horatio H. Freeland became a well-known Chicago businessman and hotelier).

In 1844 Gardner returned to Chicago and eventually opened a mercantile business in Southport, Wisconsin (soon to become Kenosha).

In 1849, the 32-year-old Gardner decided to change the course of his life by entering the lumber trade, setting out on November 9, 1849, for Pensaukee, Wisconsin, on the western shore of the bay of Green Bay. By May 9, 1850, his new sawmill was open.

Once he had expanded operations to Little Sturgeon, Gardner’s business continued to grow.

“His business rapidly increased up to 1857, when he became somewhat embarrassed, like many others, in the great financial panic of that year,” wrote Door County biographer Charles Martin in History of Door County, Wisconsin (1881). “He, however, met every dollar of his obligations and maintained fully his reputation for integrity.”

Gardner’s reputation was so strong, despite serious setbacks such as an 1857 fire that destroyed the mill and 250,000 feet of lumber, that when the area that had been known as Chickatock was set off from Brussels by the Door County Board of Supervisors on June 10, 1862, to become the county’s 12th organized town, there was not much dissent when it was decided to name the new town after its biggest employer, Mr. Freeland B. Gardner.