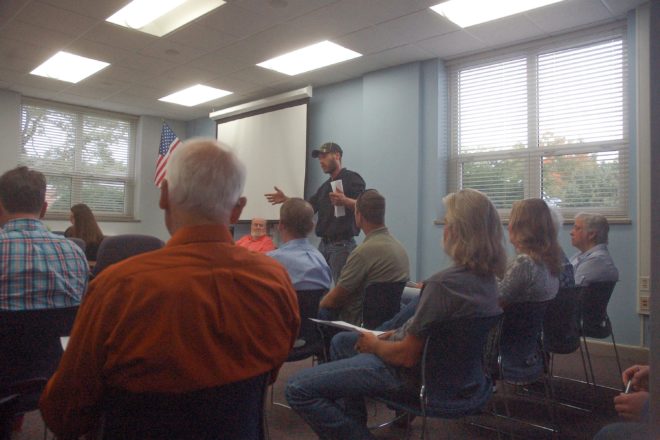 In a 3-2 vote, the Door County Land Conservation Committee decided to forward a letter to the Wisconsin Department of Natural Resources (DNR), voicing support for the karst-targeted changes to NR 151, the state’s manure-handling rule, but also asking for clarification on the cost-sharing aspect of the new rules.

“This is the step that we need to take in order to protect groundwater quality,” County Conservationist Erin Hanson told the committee about the rules designed specifically for the karst region. “We’ve been asking for this for along time.”

The two farmers on the committee – Randy Halstead and Mike Vandenhouten – voted against the committee sending a letter of support. Vandenhouten said he had heard from many farmers in the Brussels area, who say they will lose about 30 percent of their cropland for spreading manure under the proposed rules.

“That burdens farms when you lose one-third of your cropland,” he said. “What scares me about this rule is once it’s implemented, it will always be there.”

Vandenhouten said more work needs to be done on the rule changes, and he suggested the committee might get more attention from the DNR by voting disapproval of the new rules.

Several conservationists also spoke, including Dean Hoegger of the Clean Water Action Council, William Iwen of Kewaunee Cares and Paul Leline of the Door County Environmental Council. All agreed that this is a good first step in trying to protect our groundwater.

Kewaunee County farmer Lynn Utesch, who used to farm on Washington Island, said there are options farmers on low-soil karst territory can take by using the land differently, and he offered his assistance to any Door County farmers who want to look at other options.

“It’s time to start looking at our practices, not looking backward,” Utesch said.

Conservationist Hanson said bringing small farms up to the standards that large Concentrated Animal Feed Operations (CAFOs) must abide by – not spreading liquid manure on soil two feet or less – was needed. She pointed out that the new rule applies the bare minimum standards. Some have suggested the threshold for applying liquid manure on the karst landscape should be 0-5 feet or even 0-20 feet.

Hanson added that even if the rules are approved, they will not go into effect overnight. For example, current soil survey maps give a general overview, but more detailed depth-to-soil studies will have to be done. That is also why the committee felt it important to add the clarification on cost sharing because the county wants to be able to help farmers with the cost-sharing program that awards 70 percent (or 90 percent in hardship cases) to come into compliance with the new rules. She also mentioned that abandonment of a farm would be covered under the cost-sharing program.

“We know there are areas where people will have to change the way they do things to comply with the rule,” Hanson said.

Dale Konkol, a conservationist in the county Soil and Water Dept. who works with the landowner/farmers in the county, said the department was criticized for going above and beyond to protect groundwater, and reminded the committee that they represent all the users of the aquifer.

“I would hope and think we as a department and committee continue to work with farmers and remain in compliance and up their game with manure applications,” he said.

Committee member John Neinas said all he heard at the meeting is that the new rules will put people out of business.

“I haven’t heard anyone say they aren’t putting them out of business,” he said, adding that he would need that assurance before he could vote in support of the rules.

“Our goal is not to put people out of business,” Hanson said. “I think we need to remember what our purpose is, to protect groundwater for everyone.”

The committee also heard from a couple of Door County farmers who say the new rules will put them out of business, including fourth-generation farmer Guy Overbeck, who warned that the unintended consequences of the rule changes will mean “the loss of family farms right here in Door County.”

Citing figures from a 2014 report from the University of Wisconsin-Extension, Overbeck said dairy remains Door County’s top commodity by dollar value, at $38.5 million, compared to just $4.4 million for the more visitor-friendly fruit and berry industry.

“Dairy’s a huge deal. Don’t shut the door on it,” Overbeck said.

Bryan Haberli, who has a 50-cow Black Angus beef farm in Egg Harbor, also spoke about the rule changes threatening the business he and his wife have established.

He agreed that something needs to be done to fix “the broken system,” but after the meeting, Haberli said he didn’t hear anything to change his opinion that his farm and others are in danger with these rules.

“If this passes as is, there will be no small farms in Door County,” he said.

Asked about the cost-sharing program that was mentioned, Haberli said, “What are they going to cost share? You can’t buy more soil. They’re talking about cost sharing for storage. We have enough storage for two years. That won’t help us.”

Using cropland for grazing was also mentioned as an option. “Grass doesn’t grow six months out of the year. It just is not a viable option,” he said.

However, he did like the idea of reducing pathogens in manure applied to cropland.

“Pathogen treatment I think would be a step in the right direction,” he said.

Haberli suggested that if municipal waste facilities can put waste in the lake if they achieve a certain pathogen count, “They should be able to give us a pathogen number to be able to spread it on the ground for ground crops.”

You can find the draft rules here:  dnr.wi.gov/news/input/documents/rules/WT1516DraftRule.pdf.

The DNR is taking comments on the rule changes through Oct. 4. Send them to Mike Gilbertson, DNR, 101 S. Webster St., Madison, Wis., 53707, or electronically at [email protected]