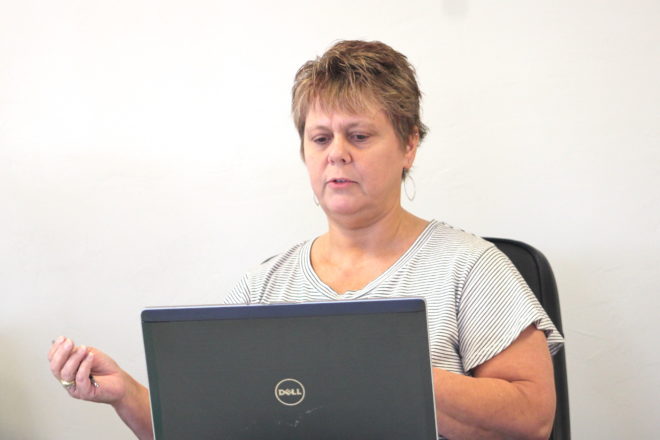 Nasewaupee clerk Jill Lau informs the town board June 16 about what’s being done to get homeowners who rent out their properties for less than a month to comply with the town’s short-term-rental ordinance. Photo by Kevin Boneske.

Getting homeowners who rent out their property for less than a month to comply with the short-term-rental (STR) regulations that are now in effect in Nasewaupee was the main topic of discussion during last week’s town board meeting.

Nasewaupee clerk Jill Lau said the town’s property owners who are found to be out of compliance are being sent first and second warning notices, after which citations will be issued.

In the schedule of fees and penalties the board approved last week, a violation of the town’s short-term-rental ordinance now carries a $100 fine, and second and subsequent offenses carry $200 fines.

The town contracted with Granicus, a company that will help to identify short-term rentals being offered within the town and whether those are in compliance with the town’s regulations.

“We hired Granicus to be a tool for us to help the board enforce this ordinance,” Lau said. “They aren’t our enforcer. Granicus doesn’t go out to the properties to do anything. It’s the board’s responsibility.”

She said the town issues warnings, which Granicus mails out, to property owners who are found to be out of compliance with the short-term-rental ordinance.

“Granicus is just a tool,” Lau said. “We have to control the operation of that tool, and that is something we need to figure out how we’re going to do that.”

Additional requirements in the ordinance include having a private on-site wastewater treatment system (POWTS) that’s large enough for the number of occupants staying at a property that’s not served by a public sanitary sewer; a rooming-house license from the Wisconsin Department of Agriculture, Trade and Consumer Protection; and a license from the Door County Tourism Zone Commission for collecting taxes related to the short-term lodging.

Under those requirements, Lau said a three-bedroom short-term-rental house with a POWTS would have a maximum occupancy of six, provided that the POWTS is large enough to accommodate that many people.

“This [ordinance compliance] is a much bigger beast than what everybody ever thought,” she said. “Once that is all done, if everything is all good, we approve their permit through the system, through Granicus, and Granicus then produces that permit and emails it to that owner.”

Lau said that calls and emails sent directly to town officials to report noncompliance will not work in the future because of an inability to track the number of contacts officials receive.

Instead, Nasewaupee residents should make complaints and report noncompliance online at secure.hostcompliance.com/nasewaupee-wi/complaints/type, or by calling the hotline at 920.488.9677. Lau said that will be the only way the town will be able to pull information and a report on how many complaints were made about a property to then move to the penalty phase.

“You can’t just put in a complaint that they’re renting over capacity,” she said. “Unless we have something to go by, we need something that backs that up, and this year is going to be our year to work through stuff.”

Lau said the town employs no one to verify those complaints.

“All we are responsible for is notifying them you are in violation of the town ordinance,” she said.

“We take down that 51 by a good five, six or seven, and then 11 have now received warning letters, so we’re kind of getting up to that 50-some,” she said.

Nasewaupee town chair Steve Sullivan said that regulating STRs is “not working as easily as we thought, but I think it’s going to take some time.”

Lau said Nasewaupee is going from “a town of really no rules at all to major rules – that’s a big change.”