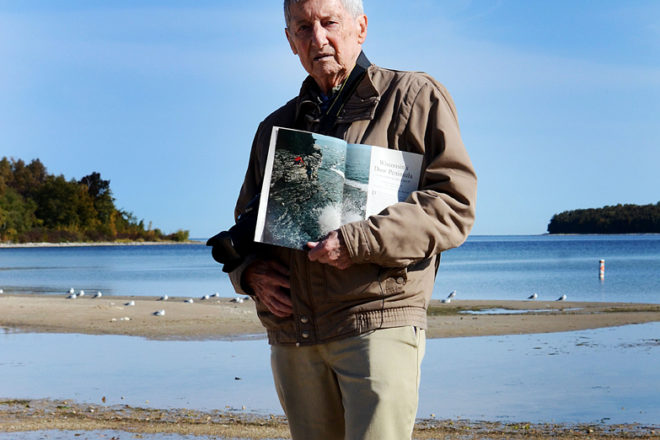 Don Emmerich helped change the course of Door County tourism with his photographs of the peninsula for National Geographic Magazine in 1967 and 1968. Photo by Katie Sikora.

As we stand inside the Potter’s Wheel in Fish Creek, photographer Don Emmerich is working hard to recreate a picture from his first published National Geographic assignment, the March 1969 cover story that many credit with making the Door Peninsula into the destination it is today.

The photo from back then was a shot of a fairly young Abe Cohn shaping wet clay into a tall pitcher; the shot today is of an older Cohn creating a smaller piece, a mug.

Cohn’s fingers run ever so slightly up the side of the clay, right to the lip of the mug, and Emmerich can’t help but admire the master at work.

“That’s magnificent,” says Emmerich, searching for the right angle and lighting even as he watches Cohn create.

“Well, it requires a bit of discipline, and time is a big teacher,” says Cohn, who just recently stepped back to the wheel after overcoming health complications. “You have to be patient with it.”

Time is something there’s been a lot of since the last time Emmerich and Cohn laid eyes on each other. Nearly 44 years have passed since National Geographic published an article entitled “Wisconsin’s Door Peninsula ‘A Kingdom So Delicious’” written by William S. Ellis with photos by Ted Rozumalski and Emmerich.

“Believe it or not that one article transformed Door County,” says John Nelson, a Producer with the Door County Today television show and website. “It was a sleepy little backwater up to that point, and then that article came out and put it on the national stage. Al Johnson used to say there was pre-Nat Geo and there was post-Nat Geo.”

It was Nelson’s idea to invite Emmerich back up to the peninsula to re-shoot Door County, putting together an itinerary of people and places for Emmerich to visit and get reacquainted with.

The day before he came back to the Potter’s Wheel, Emmerich went to Washington Island to see the house where he took a picture of a girl feeding her Icelandic ponies and stopped at Cave Point to try and re-make the photo which opened the article, a dramatic shot of a couple climbing the shoreline rocks as waves crashed in. 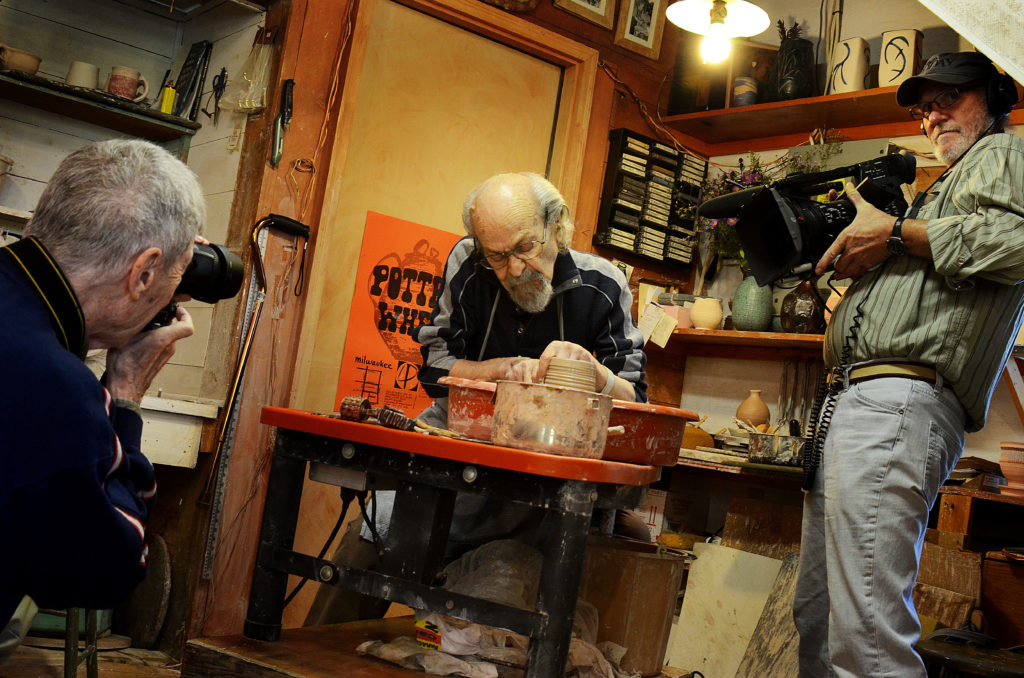 Don Emmerich (left) recreates a photo of Abe Cohn (center) at the Potter’s Wheel from a 1969 National Geographic article, while Bill Youmans of Door County Today films for an upcoming television show. Photo by Katie Sikora.

Emmerich got the new picture, but he wasn’t completely happy with it.

“What I shot doesn’t resemble the one in the magazine,” he says. “The lighting of the rocks was wrong.”

Emmerich shot the photos for the National Geographic story during his time off from his regular photographer gig at the Milwaukee Journal in the late ‘60s. He spent two weeks of vacation and a bunch of weekends traveling the county, sometimes following a script sheet provided by National Geographic, sometimes not.

“For the Chinese junk,” says Emmerich, referring to a picture of a ship called Sea Breeze that was piloted by a couple from Illinois, “the picture was there, and I said, ‘Hey, that’s a neat shot.’ I never thought it was going to be in the magazine.”

According to Emmerich, it was chilly during the summer portions of his shoot back then, which made it complicated to get pictures of people having fun in the sun. And the travels back and forth on weekends, when coupled with the 40-plus hours he was putting in at his regular job, took a toll on him.

“Without exaggerating, it was a pretty tough job. I’d been at the Journal for 15 years, but it was a whole different structure there,” he says. “You’d shoot maybe half a role of black-and-white film, go in, and publish it. Here, you shot until you got the shot…by Labor Day I was a physical wreck.”

While this trip wasn’t Emmerich’s first back to the county since his initial shoot, it was the first time he re-traced his steps from 1967 and 1968. He says that while some things have changed significantly, with buildings and businesses rising and falling, others have stayed the same.

“It was mentioned at the time that the Door County article transformed Door County from a poor man’s Cape Cod to Wisconsin Dells-East, except there’s not quite the same amount of commercialization,” says Emmerich. “Door County has managed to maintain its dignity.”

John Hansen, who has worked at and created his own pottery at the Potter’s Wheel since the late ‘80s, agrees that the article wasn’t quite as transformative as it could have been. 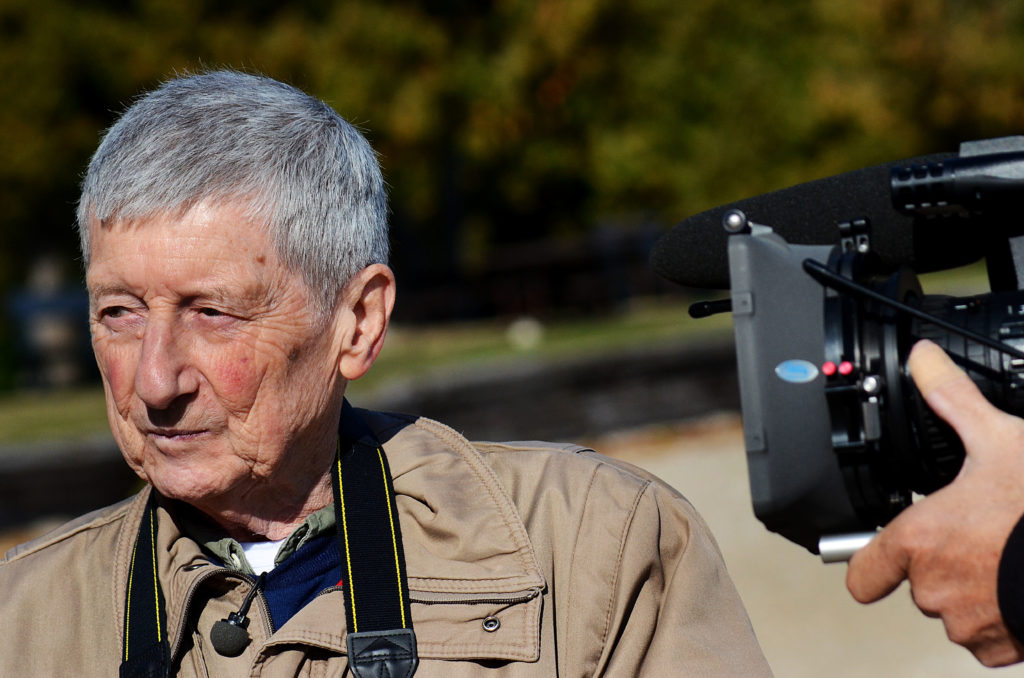 Don Emmerich retraced many of his steps around the Door Peninsula from 1967 and 1968 and says, “Door County has managed to maintain its dignity.” Photo by Katie Sikora.

“Despite all the progress, I think we’ve really managed to keep things in balance,” says Hansen. “It wasn’t at the cost of the natural beauty which is the focus of that article.”

The article and photos may have focused on natural beauty, but they also provided a context for something else that makes Door County a national destination: its people.

“We also revere our stories, and Abe Cohn is a great example,” Hansen says. “Working here has made me so aware of the legacy of Cohn’s work. Literally thousands of people come here, and we’re a touchstone of the Door County community.”

Emmerich himself has a bunch of stories from his original shoot (including one about how he embarrassingly got his entire body –even his armpits – sunburnt), and it’s likely that he’ll have even more now that he’s returned, including one about how two old guys are still practicing their crafts decades after they first met.

“That was back then,” says Emmerich to Cohn, as the two finish up their shoot.