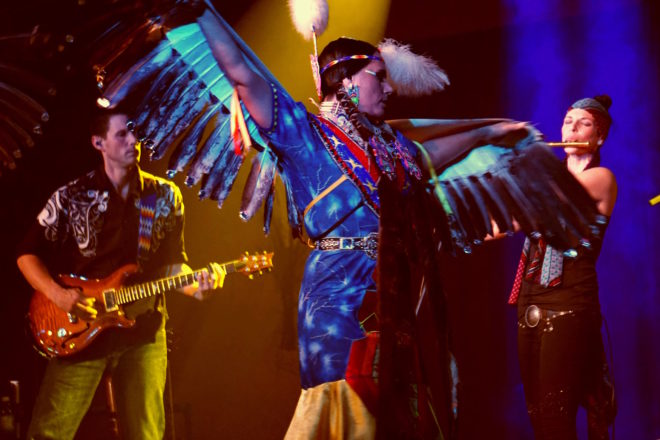 Brulé will electrify the audience June 16 at the Peg Egan PAC. Submitted.

The Peg Egan Performing Arts Center will host Brulé during its Sunset Concert Series on June 16, 7 pm. Paul LaRoche is the founder and producer of the award-winning Brulé: one of the top-selling Native American adult/rock music groups. It has chalked up impressive CD sales of more than 1 million worldwide.

Brulé has pushed the boundaries of contemporary Native American rhythms and classic rock through its electrifying, genre-blending selections produced with a five-piece rock ensemble augmented with an array of traditional Native American instrumentation. Paired with the stunning steps of one of the top Native American dance troupes, Brulé’s authenticity brings a multidimensional art form to this cultural rock opera.

The Peg Egan PAC is an outdoor amphitheater in Egg Harbor’s Eames Cherry View Park. There are no seats, so concertgoers should take blankets or lawn chairs. Carry-ins are allowed. Admission is free. In case of rain, the show will move to Calvary Methodist Church, 4650 County E in Egg Harbor.