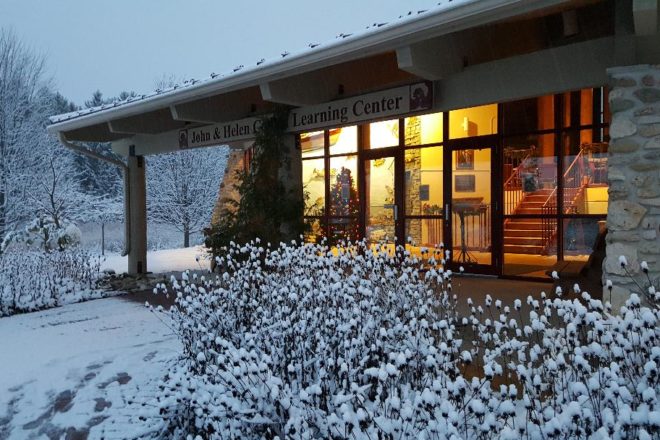 Practice “messy gardening” by leaving dead flower heads full of seeds for nomadic winter birds to nibble on. And, with every snowfall, the dried stalks will “bloom” again when they’re flocked with snow. Submitted.

by Coggin Heeringa, Wild Ones of the Door Peninsula

A flash of red caught my eye. The bird near the feeding station was too small to be a cardinal, but not a purple finch either. A closer look revealed not one, but a whole flock of frenetically feeding common redpolls. But they weren’t at the sunflower-seed feeder. They were acrobatically clinging to dried stems, extracting seeds from the wildflowers in the Crossroads Native Plant Garden.

I tempered my joy (I didn’t see redpolls at all last year) when I remembered that these streaked, sparrow-like birds with the distinctive red foreheads usually migrate south from their tundra and boreal-forest breeding grounds when there’s a shortage of food. A good year for bird-watching is often a bad year for birds.

A quick glance at the Winter Finch Forecast 2020-21 (yes, it’s a thing), indicates that it is likely because tree seed and cone production in the far north was poor and that in spite of the pandemic-related border restrictions, thousands of Canadian birds may be crossing into the Great Lakes region. We’ve already experienced an eruption of pine siskins, but like most winter birds, they appeared and disappeared faster than Wisconsin’s weather changes.

What struck me about the redpolls, which also have come and gone, was that they were feeding on the seeds of native plants.

“If nothing moves in your landscape but a lawn mower, it’s time to think about designing a natural yard.”
— Wild Ones of the Door Peninsula

It was my passion for birds that made me a committed advocate of native plants. I became a member of Wild Ones of the Door Peninsula and organized invasive-species mitigation programs at Crossroads. And I thought I understood the food web: the way that plants capture energy from the sun, and then animals eat plants, and other animals eat them, so the energy is passed along. (I’m now humbled by the complexities of food webs and am struggling to comprehend them.)

But until I read the book Bringing Nature Home: How You Can Sustain Wildlife with Native Plants by Douglas Tallamy, I did not realize that “insects are able to eat only vegetation from plants with which they share an evolutionary history.” In other words, most native Wisconsin insects can eat only one or two species of native Wisconsin plants. All other plants are, to them, distasteful or even poisonous.

Yet when we landscape our properties, we tend to plant hybrids, cultivars or trees, shrubs and flowers that have come from other parts of  the world. These introduced plants have no natural predators, and they also do not contribute in any way to the food web.

In this region, moths and butterflies drive the food web. The adult insects lay eggs on native host plants. Their caterpillars devour the leaves, becoming a nutritious, high-protein food source. During breeding season, songbirds feed themselves and their offspring almost exclusively on caterpillars.

Many people landscape for birds by planting ornamental shrubs that produce berries or fruit. If, instead, they planted plants that serve as hosts for butterflies and moths, they could make their properties far more inviting as wildlife habitat.

That said, birds do depend on oil-rich seeds and berries in the fall and winter. Native wildflowers, shrubs and trees provide high-quality survival food for resident winter birds and also for the flocks of colorful finches that pass through – some years, anyway.

The Wild Ones organization has a great saying: “If nothing moves in your landscape but a lawn mower, it’s time to think about designing a natural yard.”

If you have a landscape full of diverse native trees, shrubs and wildflowers; and if you practice “messy gardening” – leaving dead flower heads, now filled with seeds, standing – you will have nomadic winter birds dropping in for short visits from time to time. And, with every snowfall, the dried stalks will “bloom” again when flocked with snow.

Coggin Heeringa is program director of Crossroads at Big Creek and vice president of Wild Ones of the Door Peninsula.