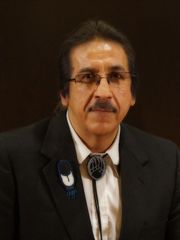 Gary Besaw, former chair of the Menominee Indian Tribe of Wisconsin, gave the State of the Tribes address before the state assembly and some members of the state senate on Feb. 13. While citing some specific legislation the tribes of Wisconsin have supported or opposed, Besaw’s primary message was to seek more collaboration between the tribes and state government.

“We hope to use this opportunity to bring our communities and great state closer,” Besaw said. “We keep emphasizing to agencies the need to give us a heads-up when any new administrative rules or policies directly affecting our nations are being considered. We want to ask you that, as state legislators, you do so as well… Let us help in making a law or administrative rule that impacts us.”

Besaw was more strongly supported from the side of the room filled with Democratic legislators, particularly on issues of the environment, drug testing and race-based school mascots. But there was general support for measures such as farming for hemp, which passed the legislature in 2017, and taking measures to prevent chronic wasting disease in the state’s deer population.

“We would have loved to include tribal involvement [in the hemp bill], but we’re still glad it got passed and we will participate in this environmentally sound opportunity,” Besaw said.

Besaw emphasized the differences in thought concerning the environment between the 11 federally recognized Indian tribes in Wisconsin and many legislators.

“The two-legged, the four-legged, the finned, the winged and the plants, we’re all related,” Besaw said. “How dare us say we’re not.”

Besaw brought up the Back 40 Mine, approval of which is taking place near the Menominee River but across state lines in Michigan. The Menominee tribe in particular is concerned about water quality issues and cultural impacts the mine may have in the area.

“Because this is an interstate, intercommerce boundary waterway, we believe the federal government mistakenly is giving regulatory authority to the state of Michigan,” Besaw said. “The State of Wisconsin seems to have given away the concerns of its citizens to another state.”

Besaw tempered the tribe’s concern of the mining moratorium that was lifted in the state last year by explaining that tribes recognize the need for natural resources.

“We’re not Luddites,” Besaw said. “I have my phone over there. I didn’t run here, I drove a car down here. We know society must use resources today. But we try to do that in a more sustainable way.”

Overall, Besaw’s message sought a more welcome voice at the debating table and a call for better understanding between the tribes and state government.

“We’re not doing this to argue or make enemies,” Besaw said. “We’re not enemies, we see the world differently.”