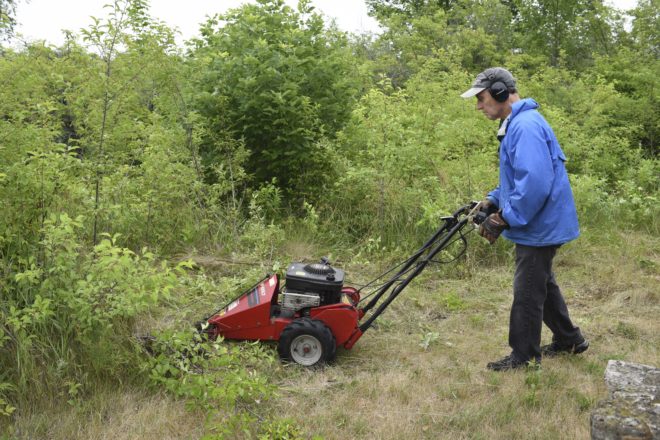 Gene Kenny, one of the presidents of Newport Wilderness Society, operates a sickle mower to cut invasive plants in Newport State Park this summer. Photo by Deb Ford.

Even wilderness needs a helping hand sometimes, and members of the Newport Wilderness Society (friendsofnewport.org) frequently answer the call for Newport State Park.

During the coming months, in order to bring a two-mile loop back into compliance with the standards of the Americans with Disabilities Act, the group will need donations to rebuild and slightly elevate a boardwalk on the wheelchair-accessible Fern Trail.

Off Lot 3, Fern Trail currently has a boardwalk that covers about 600 feet of the trail. That low-lying boardwalk routinely floods due to rain, runoff and snowmelt, and society volunteers plan to elevate it 14-16 inches off the ground so it’s passable during rainy spells. The new boardwalk will also cover more of the trail – about 800 feet.

The group needs donations to help complete the project, which already has $20,000 in grant support from the state’s Knowles-Nelson Stewardship Program. Volunteers will do all of the work, from making cuts to attaching boards. The high cost of materials drove up the project’s cost estimate to between $130,000 and $150,000, said Gene Kenny, the society’s co-president. He hopes those costs will decline next year.

“One of the big problems at the moment is the availability and cost of wood,” Kenny said. “We’re not able to do a lot this year, but we’re doing a lot of the planning and fundraising.”

“We’ll build it in eight-foot sections, and then transport it out to the trail, and then assemble the boardwalk,” Kenny said.

The Newport Wilderness Society has 13 board members; about 150 active members who do everything from fundraising to providing their sweat and craftsmanship; and about 300 members overall, including emeritus members.

The nonprofit organization – the oldest state-park friends group in Wisconsin – did not tackle any major projects in 2020 because of social-distancing protocols. However, members did communicate via Zoom and newportvolunteersgroup.io. That communication helped members to get organized for this year.

Volunteers are facing a November deadline to complete the restoration and upgrade of a kiosk filled with photos and information about the history of the park and the lumbering settlement that occupied and harvested the forest in the mid- to late 1800s. If they don’t complete the project by November, they could lose a small grant from the state’s friends of state parks group.

Volunteers got going late last month on repairs to the physical structure of the old kiosk near the beach, and naturalist Beth Bartoli and member Julie Heins are working on historical passages and photographs that will be etched onto metal sheets for display.

The society helped to pay for similar etched signage and a kiosk in the park’s Dark Sky stargazing area in 2018.

Kenny said his group wants to help add a horse trail through and around the park in the years to follow, but it would have as small of an impact as possible on the park and its existing 22 miles of trail.

Learn more at fori.us, on Facebook at RockIslandFriends, or by email at [email protected].

The Sierra Club Wisconsin Chapter on July 1 expressed disappointment in the legislature cutting $41 million for Milwaukee and Madison public-transportation systems that had been included in Gov. Tony Evers’ proposed budget, and then adding $40 million for what it considers a harmful Interstate 94 east-west highway-expansion project at Milwaukee.

The Sierra Club also said other environmental initiatives that it supported were removed from the budget, including funds for water protections, clean energy and energy efficiency, and funding for public lands.

“It is disappointing to again see the legislature strip out programs that are not just beneficial, but necessary for the health and well-being of Wisconsinites,” said Elizabeth Ward, Wisconsin director. “The transportation budget in particular is adding insult to injury.”