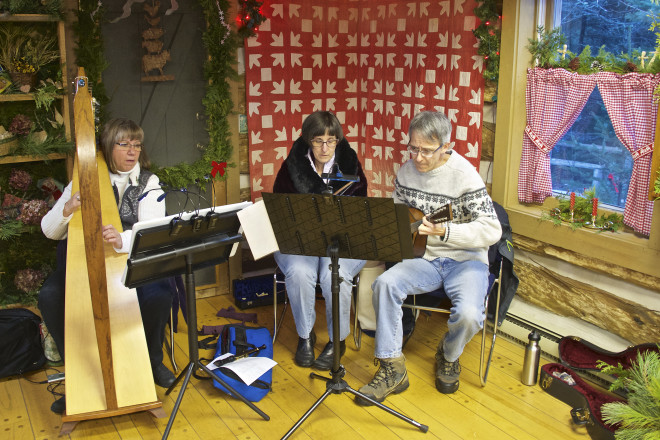 Comprised of Vicki Medland, Michael Draney and Dorothy Summers, the Green Bay-based band performs a range of music from the 12th to 18th centuries on period instruments, with Summers on folk harp and alto recorder, Medland on soprano recorder and bowed psaltery, and Draney on mandolin (though a modern instrument, Medland points out that it creates a very similar sound to the cittern, “a small lute that was popular in the Renaissance.”) 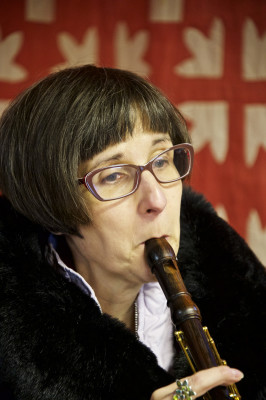 Their “understated, quiet music” reflects the sensibilities of the group, which was named after the Duskywing, a genus of skipper butterfly (Erynnis) with several species native to our area.

“They are pretty little insects with subdued muted colors,” Medland said. “All three of us love nature and the outdoors and wanted a name for our group that was a reflection of that. We also wanted a name that would work for the different types of music we play. It’s about being beautiful, but not flashy.”

“[Mike and I] got into Renaissance music because we were playing in an Irish music group,” Medland said. “We were invited to perform at a Texas fair with that group and due to my love of costumes and Mike’s talent for music and also juggling, we got caught up in the fun and excitement of the fair. As educators, we wanted to add more to our performances and became more focused on playing period music and adding in information about the songs for our audiences.”

This weekend, the group will perform traditional favorites along with old and unfamiliar pieces.

“Christmas carols are some of our oldest music,” Medland said. “Many of the songs we play go back to the Middle Ages. We also play wassails [songs sung or played as a blessing for good harvest of fruit] that were probably first played for planting and harvest celebrations and then adapted for Christmas revelry.”

Natural Christmas will take place from 3 – 6pm on Saturday, Dec. 12 at The Ridges Sanctuary. For more information, visit RidgesSanctuary.org or call 920.839.2802.