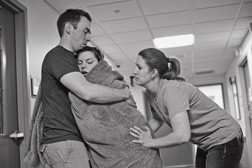 Heidi Kratcha performs a hip squeeze on client Amber Yahnke, who is being held by her husband Matt. The hip squeeze is helpful during contractions, said Kratcha, who practices the Bradley Method of childbirth. Submitted photo.

When Heidi Kratcha was expecting her first baby 15 years ago, her older sister told her what a good experience she’d had with the Bradley Method of natural childbirth. Kratcha took classes, and her daughter and, several years later, two sons were delivered without medication.

By learning how to relax and understanding the physiology of labor, she was able to eliminate the fear that causes tension and pain.

Heidi Kratcha performs a hip squeeze on client Amber Yahnke, who is being held by her husband Matt. The hip squeeze is helpful during contractions, said Kratcha, who practices the Bradley Method of childbirth. Submitted photo.

Kratcha was so impressed that she took the training to become a certified instructor in the Bradley Method, which increases an expectant mother’s self-awareness, teaches her how to deal with the stress of labor by tuning in to her own body and encourages her to trust her body by using natural breathing, relaxation, nutrition, exercise and education.

For the past four years, Kratcha has been teaching 12-week classes in the Bradley Method, that was developed by obstetrician Dr. Robert Bradley more than 45 years ago. Bradley believed that women’s bodies are designed to give birth naturally if they trust themselves to relax. Proponents say that nearly 90 percent of women who are educated in the method give birth without pain medication. It stresses active participation by the husband or other coach, immediate and continuous contact with the new baby and breastfeeding beginning at birth. Kratcha is the only certified instructor of the Bradley Method north of Oshkosh.

Kratcha also teaches the pregnancy diet developed by Dr. Tom Brewer (drbrewerpregnancydiet.com) that features high protein, natural foods and – a surprise to most people – added salt, which helps women with high blood pressure that can lead to pre-eclampsia. Brewer also believed it was unwise to hold pregnant women to a strict limit on gaining weight, with 35 to 40 pounds accepted as average.

For the last 3½ years, Kratcha has also been a certified doula, a word that comes from the ancient Greek, meaning “a woman who serves,” and is now used to refer to a trained and experienced professional who provides continuous physical, emotional and informational support to the mother before, during and just after birth; or who provides emotional and practical support during the postpartum period.

DONA International, the largest doula association in the world, says studies have shown that when doulas attend births, labors are shorter with fewer complications, babies are healthier and they breastfeed more easily.

As a doula, Kratcha has worked with many women in the Appleton/Green Bay area, and says that 90 percent of them were successful in having medication-free deliveries. She is passionate about the value of pre-delivery education that teaches women to understand what her body is doing, to tune in to the process, breathe naturally and relax to decrease the discomfort. Exercise throughout pregnancy is important, Kratcha says, “It’s called labor for a reason.”

Kratcha believes that inaccurate media depictions of childbirth contribute to fear of what should be a natural process. “In only eight or nine percent of cases does water break before labor begins,” she says. “If a pregnant woman has eaten a healthy diet and there is no infection, the water should break during the pushing stage of labor.”

She also says that women trained in the Bradley Method rarely scream during labor, but may moan softly as they breathe deeply. “Nurses who are not familiar with the method are amazed,” she says. Kratcha points out that doulas don’t do “anything medical” in the labor and delivery rooms, but provide encouragement and emotional and physical support to the mother and husband or other birth coach.

The doula may also suggest positions to make the mother more comfortable or to speed delivery. “We teach women to be informed consumers and their own advocates,” she says. “We let them know that they have choices. When labor is induced with Pitocin, contractions are so intense and close together that the mother loses control of the natural birthing process. Epidurals also slow labor, Kratcha says, because the patient has to stay in bed, whereas walking and changing positions can make labor shorter and more comfortable.”

About one-third of all babies are now delivered by C-section. Doctors often recommend this when the baby is large or the due date has been passed, but Kratcha says that in cases that aren’t emergencies for the baby’s or mother’s health, a natural delivery is usually possible. She wants women to know they have choices.

The Kratcha family recently moved to Sturgeon Bay. She is currently teaching a series of classes in the Bradley Method in Green Bay, but is interested in teaching and working as a doula in the Sturgeon Bay area. She can be reached at 920.470.1478 or [email protected]. The usual charge for the series of 12 two-hour classes is $250, with an extra charge for attending the birth, but she is willing to work out an arrangement so that the cost won’t prevent anyone from participating. She says that some insurance companies will pay for doula services.

Amanda Krueger of Sister Bay has two children. “The first birth was induced with Pitocin,” she says. “I didn’t get to push long enough, and the doctor suctioned the baby out. Heidi was my doula for the second birth. She was wonderful, and the difference between the two experiences was phenomenal. The second one was all natural, the doctor was super supportive and it was a fast birth. Heidi made sure I stayed focused and that I used every contraction to its fullest, so that no effort was wasted. I learned that your body can do it and do it right.”

Heidi was also the doula for Amber Yahnke of Green Bay during the 31-hour labor with her baby last year. “It was crucial to have Heidi with me the whole time,” Amber says. “It’s easy to become discouraged after that many hours, but she kept reminding me that the baby would come at the right time.”

Amber is now studying to be a childbirth instructor and doula. “I became passionate about it when I learned what our bodies are capable of doing,” she says. “I felt so empowered, and I want to help other moms have the same experience.”