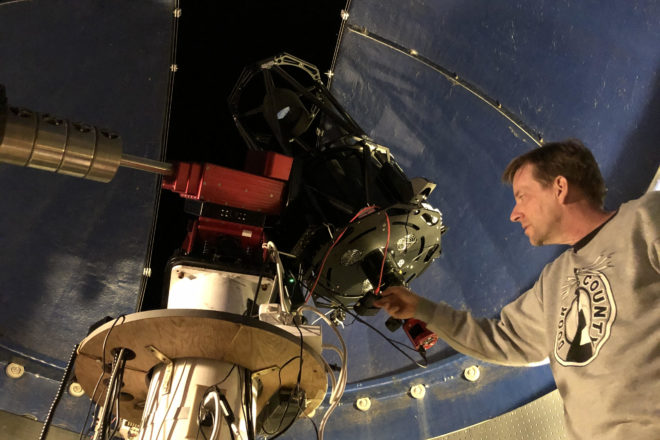 When it comes to dark skies, seeing the light isn’t a good thing

Pardon the pun, but astronomer Tom Gwilym wants more people to “see the light” about protecting Door County’s dark skies. And he’s not alone in that effort.

Gwilym, vice president of the Door Peninsula Astronomical Society, started an email campaign recently to try to get something done about a lighted billboard along Highway 42/57 northeast of Sturgeon Bay. He said it contributed to light pollution around his nearby yard and created light disturbance around the Ray and Ruthie Stonecipher Astronomy Center, which is adjacent to the Crossroads at Big Creek natural area east of the city.

In addition, Gwilym and Crossroads’ naturalist, Coggin Heeringa, are asking people to turn off unnecessary lights at night and use less-intrusive lighting countywide, particularly near Crossroads at Big Creek.

“The billboards have lights shining up at the sky,” Heeringa said of the signs a mile south of the beginning of the Door County Scenic Byway, where billboards cannot be lit. “Tom has some disgusting photos of how much the sky is obscured by the lights. The issue is [that] lights need to be aimed down and shielded, not aimed up at the sky.

“If you’re trying to do astrophotography, which is what we do at our observatory, the light completely washes out images of a whole section of the sky.”

Heeringa added that artificial light also hinders her goal of making Crossroads a stopover site for migrating birds. She explained that artificial light affects migratory birds that navigate by the stars, disturbs nocturnal breeding patterns of animals and insects, causes animals to avoid certain locations and can cause plants to “put out perfume” during the night, when pollinators are not flying.

She said Newport has some of the darkest skies in the state, thanks to being situated on 2,700 acres of wilderness at the point of a peninsula. Even so, the lights of Sister Bay, nine miles to the southwest, show up on her meter. Bartoli has addressed the Sister Bay village board to urge the village to use amber bulbs or dimmer lamps to replace new, bright-white LED streetlights.

Bartoli said that rural residents also contribute to light pollution by using bare-bulb patio lighting and sodium lights that are left on all night, altering Newport’s night sky. Motion-sensing lights are preferable for security, and timers that switch lights off during late-night hours are helpful in the effort against light pollution. Bartoli emphasized the need for lights that are hooded or shielded from above and that don’t angle onto neighboring properties.

Gwilym has asked Destination Door County (DDC) to urge local businesses to illuminate their properties without “spraying light” out and up into the night sky. He sent emails to DDC after noticing that the organization’s promotional materials mentioned how visitors can enjoy the county’s dark skies and occasionally have a great view of the aurora borealis.

When asked whether DDC provides local businesses with information about dark-sky-friendly lighting, Jon Jarosh, DDC’s communications director and interim chief, said, “At this point, we have not, but it’s frankly kind of an intriguing idea.”

Jarosh said the designation for Newport State Park prompted DDC to mention dark skies in general because visitors are often amazed by how many stars they can see in many locations throughout the county, and he said he has not heard many visitors complain about light pollution.

Gwilym is the chief computer operator and “telescope tweaker” for the Door Peninsula Astronomical Society. He considers the county’s darkest spots to be tourist attractions. He counts the society’s property among those, largely because the facility is often open to the public and has a better set-up than many universities, courtesy of its observatory and 16-inch, computer-driven telescope. Gwilym said that stargazers and those who cannot see many planets or constellations in their home cities often comment on the darkness of Door County skies during stargazing events.

He said that prior to the electronic sign and adjacent billboard going up, he could easily make out the Milky Way in the skies above his house. He contacted Rob Wamsley, the new Green Bay area manager of Link Media, the owner of the billboard, to ask the company to change the lights of the nonelectronic side of the billboard so they shine downward on the sign rather than up into the sky. He also thinks motorists could see the sign just fine if the lights were dimmer.

Wamsley did not return a call to the Peninsula Pulse for this article, but in late May, he emailed Gwilym. Wamsley told Gwilym he enjoys the outdoors and the night sky, and he subsequently sent this response: “The whole area with Culvers, the gas station and the parking lot certainly creates an island of commercial light in that area. I’ve asked if our subcontractor can reorient the lamps to point more directly toward the sign rather than point so much skyward. Beyond that, I have one other idea we may look into. We are actively looking into this, and I will let you know once I know more.”

Prior to emailing Wamsley, Gwilym talked this year with Mariah Goode, Door County land use services director, to urge her to do something about the late-night glow that the billboard adds to the horizon northwest of the Door Peninsula Astronomical Society property and its observatory. Goode advised Gwilym that the best option would be for him to contact Link Media directly.

If the property owner or the media company want to voluntarily change the direction of the lights, “that would be great,” Goode said by email. “But we can’t make them do that. That particular sign is not one we can do anything about.”

The county had tried to deny Link Media’s permits for the billboard and others in spring 2019, but Link appealed, and the court basically ruled that the county’s sign ordinance could be considered discriminatory about the content of the messages on the signs, even though that was not the county’s intent. Rather than have a chapter of its zoning ordinance “completely blown up,” the county allowed the sign and then rewrote the sign provisions.

The county does have an ordinance regulating light pollution that applies to the nine towns under the county’s jurisdiction. The ordinance governs lighting on new signs, new lights on existing signs, and lighting of multi-occupancy developments.

How Dark Are Dark-Sky Parks?

Tom Gwilym, vice president of the Door Peninsula Astronomical Society and the operator of its 16-inch telescope at the Ray and Ruthie Stonecipher Astronomy Center, said the observatory and society property east of Sturgeon Bay has a darkness-meter reading of 4 on the Bortle Scale, a light-measurement term that’s linked to “magnitudes per arcsecond.” The lower the number, the darker the sky, and the more stars that are visible.

Gwilym said visitors to locations that typically have that amount of artificial light usually can see the Milky Way fairly well on a clear night. By comparison, Newport State Park has much better naked-eye conditions than the society, with the Milky Way quite clear on most nights and a Bortle Scale reading of around 2.

Newport remains the only Dark-Sky Park in Wisconsin – as designated by the International Dark-Sky Association (IDA) – and it’s one of only about 20 in the nation.

If the Door Peninsula Astronomy Society tried for an IDA designation – and it has not – there would be some IDA Dark-Sky locations with a brighter night sky than the land east of Sturgeon Bay. The nearest IDA-recognized Dark-Sky Community – Homer Glen, Illinois – has a Bortle Scale score of about 5, but it deals with a glow from the southwestern suburbs of Chicago as well as Joliet and Midway International Airport.

Communities and parks need much more than just a dark sky, however, to gain Dark-Sky recognition. Newport’s naturalist, Beth Bartoli, discussed the complicated application process that Newport dark-sky backers went through. Even before being invited to apply, they needed letters of support from the community, meter readings from 14 locations in the park and photographic evidence of night-sky visibility, including the clarity of the Milky Way.

They also had to prove that the park would perform community outreach and education, protect habitat and encourage the community to keep aiming lights down, not upward and outward.

Of the three tiers for darkness levels – gold, silver and bronze – Newport is between gold and silver.

“Right now we’re not in jeopardy of losing that designation because of our dark-sky level,” Bartoli said.

However, if the Newport State Park friends organization did not pay the salary for the naturalist’s position, the park could lose its dark-sky designation due to deterioration of its educational and outreach programming.