Can you remember hearing as a youngster that a small insect could sew up children’s ears and mouths if they misbehaved? Folklore from other parts of the country even had them killing mules or feeding snakes.

Such were the beliefs of some superstitious people through the years of the capabilities of one of the most beneficial insects, the dragonfly. 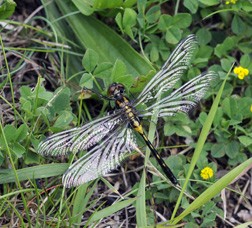 Most dragonflies like this Belted Whiteface need warm sunshine for best flying.

The name “devil’s darning needle” comes to mind as I think back to my childhood. I can easily imagine my Grandma Skala having warned us, using this name, upon our bringing a dead one into our house to show her. How I wish they would be given a much more sensible and accurate nickname – the “mosquito hawk.”

It was on this past June 30, sunny blue-sky day, that I had such good fortune photographing the insects around the margin of one of my favorite ponds. One of the species there in great number, which I didn’t bother to photograph, was the mosquito. However I did pursue with gusto the insects that were in high pursuit of the mosquitos, the dragonflies. Included were the male Common Green Darner, male Chalk-fronted Corporal and both the adult male and the juvenile female Belted Whiteface dragonflies.

Another favorite insect, the Baltimore Checkerspot Butterfly, was as I could have expected extremely tolerant of my approach and enabled me to get some good close-ups. Fortunately the people who owned the pond had planted plenty of the White Turtlehead wildflowers, which in turn were bringing in the Baltimore Checkerspots. The leaves of this wildflower happen to be the host plant of these handsome butterflies.

You will never in your lifetime have to worry about one of these amazing dragonflies biting or stinging you. As a matter of fact, they don’t even have a stinger, but during their short lifespans as adults they surely catch and eat great quantities of mosquitoes and black flies.

The hot humid weather we’re experiencing today, July 1, is bound to bring more of these highly favored insects onto our property. Perhaps it’s due to the nearness (about two miles) from a large wetland that we’ve had such good numbers of Widow Skimmers in the past.

A short while ago as I returned from walking out to the mailbox I was surprised to come upon a male Ashy Clubtail dragonfly calmly resting on our driveway, the first of this species I’ve ever seen on our land since moving here 32 years ago.

Apparently the conditions were perfect for their emergence, as were all other factors in their several-year-long life cycle under water dating back as long as two to four years. 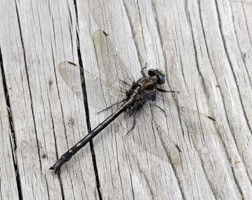 The two-inch Dusky Clubtails will feed on damselflies when hunting near water.

I have taken great delight in photographing wildlife from close range in past summers, such as the Twelve-spotted Skimmer which cooperated to perfection recently as I snapped one digital image after another while the surrounding mosquitoes had a feast – on me!

Actually the dragonfly appropriately has been labeled the mosquito hawk. Their heads resemble half of a glassy marble partly hollowed out. At rest, the insect can move its head as it scans the landscape perhaps for a flying insect whose movement it can detect from as far away as 50 feet.

Surely the most marvelous features of the more than 330 species of dragonflies in North America are the large bulging compound eyes. As many as 10,000 to 20,000 or more individual hexagonal-shaped facets, like tiny dimples, are separate visual units connected to their own nerve endings.

The belief is that the dragonflies see a rather coarse-grained picture. However, they are extremely efficient at detecting the slightest movement that resembles their prey, such as a mosquito or black fly.

Can you imagine a creature which will consume its own bulk in food in a half-hour? Watch a Common Green Darner dragonfly pursue insects along the edge of a marsh or over the surface of a sluggish stream, and you are witnessing one of the finest mosquito hawks in the world, far better than any Purple Martin that graced the skies.

These brilliant flying darners are known to buzz repeatedly through clouds of pesky mosquitoes catching them by mouth or by using their six spiny legs to form a basket-like “skeeter trap.”

While very carefully netting dragonflies for identification in the past, I would hold all four wings between by thumb and forefinger, thereby allowing the insect to grip the tip of one of my other fingers. It was then that I realized how tenaciously they can grasp another insect, such as a moth or fly, they had pursued and caught.

With even the slightest nudge, the dragonfly’s head moves considerably, almost as though it is mounted on a spring-controlled swivel. All the while the dragonfly is being held between my fingers, I can sense a distinct and steady vibration. Very likely the motion stems from eight pairs of inner, direct muscles immediately connected to the wings, which are instinctively working to help the creature escape from my grasp. When flying, the insect’s wings can move up to approximately 38 times a second.

The fact that the front and rear wings vibrate, or move in opposition to each other, is thought to be somewhat like the two propellers of a twin-engine plane turning in opposite directions, in a design that reduces torque.

The two pairs of nearly identical, shimmering, isinglass-like wings are stretched tightly over an intricately fine but strong network of veins and ribs. In fact each genus of dragonfly can be recognized by the venation of the wings alone.

These “dangerous” insects, who years ago were said to sew up little boy’s ears, are in reality to be ranked with the very beneficial insects so plentiful in the world today.

With all the thousands of ponds, streams, rivers, marshes and lakes in Wisconsin, I hereby nominate the dragonfly as Wisconsin’s official state insect. Hail to the mosquito hawk!