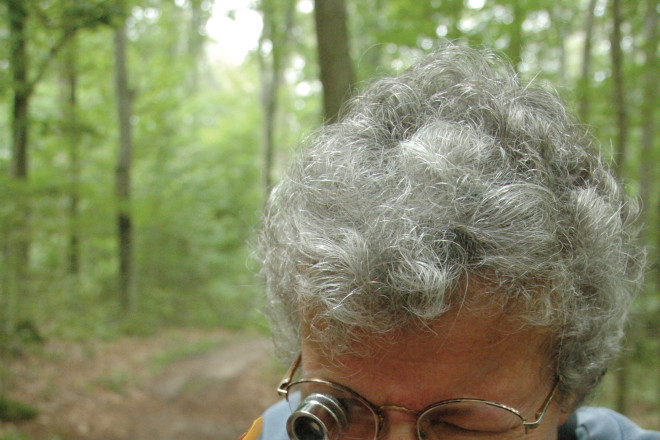 This past June my wife Charlotte and I came across a cup fungus which we at first considered to be a new species, #552 for Charlotte’s Door County list of mushroom species. She knew she had never seen one like it in the county in the past, nor had I ever photographed one either. Even Charlotte, after 38 years of examining species in the county, was stumped. 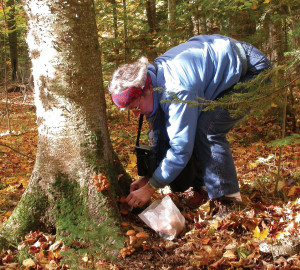 Among other things, Charlotte, a highly-skilled mycologist, examines the gill attachment to the stem of the mushroom; the overall color and appearance of the cap and stem; the spore color; its size; the odor of the species; the entire structure of the mushroom including that which was concealed beneath the leaf litter; and the growth pattern and habitat in which it was growing to attempt to determine a particular species. It turned out that this was one of the at least 100 or more specimens that she couldn’t accurately identify.

While Charlotte is qualified to answer many questions about mushrooms, whenever we are with friends or leading hikes in the woods searching for and enjoying mushrooms, the two most commonly asked questions are:  What is the difference between a mushroom and a toadstool and is that mushroom edible or poisonous?

The word toadstool dates back centuries to the period when superstitions flourished. For example, someone saw a “venomous” toad s 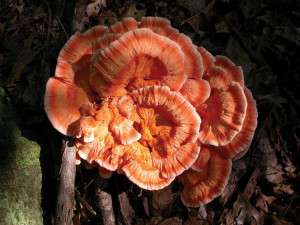 itting on a mushroom and immediately that mushroom was thereafter classified as a poisonous toadstool. Invariably, people are led to believe that toadstools are poisonous and mushrooms are safe to eat, but that is not necessarily the case. This could get downright confusing. Hence, we prefer to use the word mushroom for all species.

Whether a mushroom is edible or poisonous is a very broad topic. A person with plenty of experience can study and look at quite a few mushrooms, telling quickly whether they are edible, poisonous, or questionable. Generally, around 10 percent of known mushrooms are poisonous, while roughly 10 to 15 percent are edible. The remainder are neither edible nor poisonous because they’re too woody and tough, are too small, have little-to-no flavor, or have a very bitter taste.

If you’re going to eat a wild mushroom, there’s no room for ignorance or carelessness. Good old-fashioned common sense is critical. You can’t just compare the mushroom w 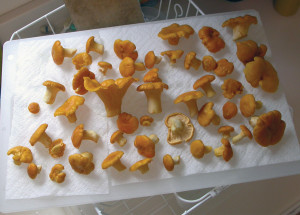 ith colored pictures in a book. If you’re going to resort to this method for determining the edibility of some wild mushrooms, forget it! You might call this “playing mushroom roulette.” Better stick to the supermarket variety.

The very best advice you can take to heart, if you are determined to collect and eat some wild mushrooms, is to go into the field with an expert, someone who knows the species extremely well and has collected and safely eaten some of them in the past. And, by all means, stick to a small number, perhaps two or three different kinds, that you can flawlessly recognize without a mistake.

Two species that could be described as “foolproof edibles” are the Shaggy Mane and Giant Puffball. We prefer the Shaggy Manes over Puffballs, which to us are rather tasteless. A student in one of Charlotte’s mushroom classes told her that she cuts the Puffball into half-inch-thick slices, dips them into a mixture of egg and milk beaten toge 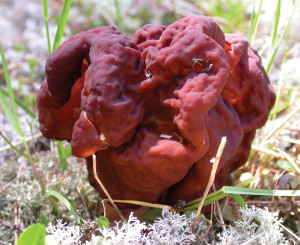 Shaggy manes must be young and perfectly white on the inside when cut apart. They are mostly water so they must be heated in the frying pan long enough to get rid of it. Fried in butter, they are very tasty.

One of the prize species we begin searching for before the end of July is the Chanterelle. This sought-after species, known to grow in many countries in the Northern Hemisphere, is more common in our county than most people realize. It’s somewhat fruity flavor, like apricots, is relished by mushroomers.

A greater snowfall than normal followed in spring by plenty of rainy weather can trigger a good crop of one of the most mouth-watering of all mushrooms, the Morel. Begin looking for them when developing Oak leaves are the size of a mouse’s ear and when the Mayapple wildflowers are barely in bud. One year we ended up collecting 16 pounds of Morels. All we’d tell people when they asked us w 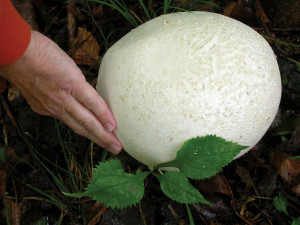 here we found them was “in a woods somewhere between Sheboygan and Gills Rock!”

We strongly suggest harvesting the Morels and other mushrooms you are collecting by cutting the stalk with a sharp knife rather than just pulling them out of the ground. In fact, we collect very little of the stems, considering them to be on the tough side for eating. Others disagree on this point, which is fine with us.

However, there is one important suggestion for consideration:  go easy on the amount you first consume. Never eat more than one new species per day. If you try several new kinds at once and you get sick you won’t know which one was the cause. Some people gorge themselves and end up becoming very sick. Actually the cell walls of all mushrooms are largely chitin (KY-tin), a substance that is difficult to digest. No mushrooms, including those purchased at the market, should be eaten raw. An especially large portion may cause severe stomach and body discomfort – at both ends!

What may not register with m 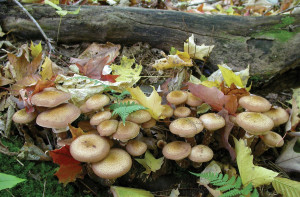 any people is the fact that mushrooms serve as one of nature’s most important recyclers, constantly breaking down decaying plant and animal material and returning it to the soil. We would virtually be up to our eyebrows with fallen trees and branches were it not for the mushrooms constantly doing their all-important job of recycling.

Common mushroom names vary considerably. A favorite of ours that we refer to as “Earth Prunes,” is the Aborted Enteloma. My brother Leo calls them “Pig Snouts.” Charlotte’s favorite mushroom for eating is what she calls the “Black Trumpet,” or the “Horn of Plenty.” Just the very sight of this species would turn most people off.

Among the most beautiful and most deadly mushrooms we enjoy finding in Door County are what are called the “Aristocrats of the Mushroom World,” the Amanitas (am-a-NEE-tas). One of the species, the Fly Amanita, is frequently seen decorating ceramic food containers used in kitchens. It’s undoubtedly the most recognizable Amanita species in the Northern Hemisphere.

Because mushrooms reproduce by spores which are easily carried by wind, or transferred hundreds of miles, for example, in wood chips imported from distant areas, we’ve been able to identify the elegant Magpie mushrooms, common in the Pacific Northwest, which Midwestern mushroom books don’t list.

The word mushroom very likely stems from the French word mousseron, referring to moss. Many are found growing not necessarily in the moss but rather in mossy places. This is one of our favorite aspects of mushroom study – where they grow. And even though we relish wild species of mushrooms, even ones we can’t identify, we are often quite satisfied to dine on the “store-bought” varieties. To the woods!