Invariably I feed the birds and other wildlife that come for food in our front yard before I feed myself. By doing this we reap the benefit of having these interesting and often challenging creatures to enjoy while we eat. I keep a daily record of what I see while eating (as well as interesting things done and seen during the day), and this card is always in sight on the kitchen table so I can quickly bring myself up to date on what to watch for. Ideally I do this while I am home and file these observations, month-by-month and year-by-year, for easy referral.

This chipmunk is heading for its burrow with cheeks packed like an old Hoover vacuum cleaner.

I suspect there are at least two and possibly three pair of chipmunks sharing the food in the front yard bird feeding area. One has its burrow in back of the stone wall on the east side of the house, while a second pair has tunneled beneath the large brush pile south of the garage. Without being able to prove it, I believe a third pair lives in another brush pile between the driveway and the garden.

The little “cheekstuffer” east of the house has quite a precarious route between his home and the feeding area. Thirty to 40 feet of open driveway must be crossed, exposing the tiny rodent to a possible Cooper’s Hawk or perhaps a Sharp-shinned Hawk, both of which we occasionally see near our house. There are few sights I enjoy more than that of a Chipmunk, tail straight upward, scurrying at full speed and sometimes considerably off balance with its cheek pockets crammed to capacity.

One observant naturalist, as written about in Victor Cahalane’s classic book Mammals of North America, determined after careful counting that one Chipmunk could carry the following loads (obviously not all together): 145 grains of wheat, 31 kernels of field corn, 13 prune pits, seven large acorns or 32 beechnuts.

Compared to the Red Squirrel that laboriously takes one seed at a time to be cached for future use, the “Chippie” is far more expedient in being able to “vacuum clean” the ground and take a really sizeable haul back to its pantry. One researcher learned that it had stored a half-bushel of a wide variety of food. 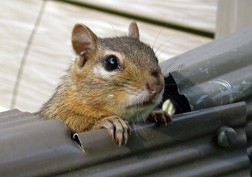 As soon as this summer’s fruit begin to ripen you can expect to see chipmunks gathering those of the Wild Cherry, Blueberry, Raspberry, Viburnum, Dogwood, Virginia Creeper, Wintergreen, Partridgeberry and others. Added to these are mushrooms, various nuts, seeds, bulbs of garden flowers such as Narcissus, Lily, Tulip and Crocus, roots of Iris, many insects such as June Bugs and beetles, and naturally cracked corn and sunflower seeds by the half-bushel. What a little connoisseur!

Hardly a day has passed recently that I didn’t hear the voice of the chipmunk, an unusual and very descriptive sound that undoubtedly gave this animal its name. Obviously there was wide-scale agreement years ago that it was saying, “chip…chip…chip,” hence, chipmunk. Personally I think it sounds more like “chuck” or “churk,” but can you imagine a name like “churkmunk?” I can’t either!

I doubt if Chippie would have as much appeal to people if it didn’t disappear from sight for about five months of the year. They usually retire to their underground world by late October and reappear by early April. They do not actually hibernate but are thought to become very immobile during the coldest months.

They are mated by early April and the young are born hairless and blind 32 days later. Within two weeks the tiny creatures are clothed in short, fine fuzzy hair. Their eyes are open at a month and by three months of age they are pretty much on their own. This year we saw the first baby chipmunks in the yard on June 7.

It is common for them to spend their entire lifetime, four to five years, on two to three acres and really not be territorial with the exception of the parts of their burrow where they sleep and store their food. One chippie was fascinated with the downspout of our home’s rain gutter and would scramble up as far as he could go. 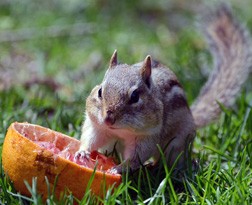 A discarded Oriole orange was licked clean of the grape jelly by this chipmunk.

In spite of what peaceable creatures they are, they have many natural enemies. Scientists who, for all I know, may have been federally subsidized with very large grants to study the ways of the lowly chipmunk, inform us that these friendly creatures are of no economic importance. Look who’s talking! Ask the Northern Harrier, Red-tailed Hawk, Barred Owl, Northern Goshawk, Weasel, Mink or Fox how many chipmunks they ate last year. You perhaps would not find the answer in any computerized memory bank, but if these predators would speak, what stories they could tell, many about people, no doubt!

I begin to simmer when I see in print the “fact” that Chipmunks are of no economic importance. When the first part or November rolls around I will, in my own silent way, wish the Chippies a good winter and let them know that I long for the first sight of them come April. Food will be waiting. You bet your life, they rate very high in my economics!