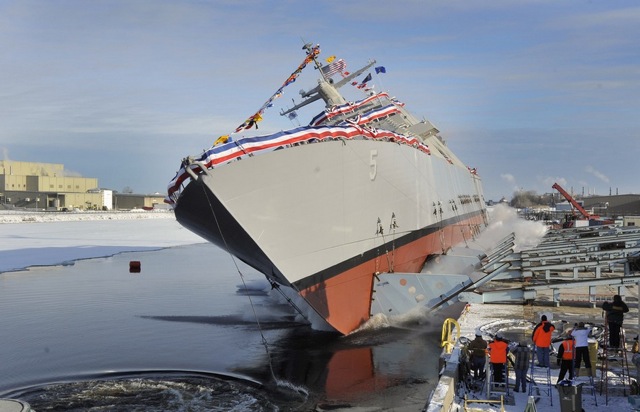 The USS Milwaukee, Littoral Combat Ship 5, is launched into the Marinette River in December 2013 at Marinette Marine. Photo by Lockheed Martin.

Sarah Bonovich and her family were enjoying the beautiful Labor Day weekend with a boating trip to Chambers Island Saturday, Sept. 5, when a series of waves created by what is about to become the U.S. Navy’s newest combat ship changed their perfect day into a near-nightmare.

“I’m on the beach and a wave comes and it’s big,” Bonovich said. “I just thought that was a random wave. Then they just kept coming.”

Bonovich, an experienced sailor, was on North Bay Beach on the island with her two-year-old son, small dog and two other children she was in charge of, ages 5 and 9. The family boat was astern the beach, tied up to another boat in what is known as rafting, a common practice among boaters at Chambers Island, located in Green Bay waters near Fish Creek.

“I would say more than 50 boats were out there,” Bonovich said. “There were a lot of boats – sailboats, pontoons, fishing boats. It was a beautiful day.”

The two older children were out in the water, enjoying the first waves. But as the waves grew stronger and larger, the kids screamed and headed for shore.

“Seriously, that was probably the scariest thing that ever happened to me,” Bonovich said. “I thank God I was there because my son and my dog would have been washed out if I hadn’t picked them up. Our umbrella, beach blanket and toys were all washed away. We ran inland about 20 feet. It was extremely dangerous. It was very, very scary. The waves just kept coming.”

As she and her kids sought safety inland, Bonovich watched in horror as the assembled boats offshore started bobbing crazily on the waves.

“It was like bumper boats out there, just bouncing into each other,” she said. “There was one raft of eight or nine boats that was really scary. They were starting to go sideways and heading for shore. A big pontoon boat close to us was washed ashore. People were trying to hold their boats out.”

Bonovich warned one woman who was trying to hold her boat in place to get away before she got hurt.

“There was one woman near me who was injured,” she said. “She needed help walking.”

“I know there was a boat punctured above the water line,” Bonovich continued. “Another boat, the anchor went to the end of its length and shot out of the water and broke the windshield of the boat.”

Eventually, Bonovich, her husband and their companions, which included a former Navy pilot, put everything together.

Not more than 10 minutes before the waves started, the group watched in amazement as a 378-foot ship passed in the near distance.

“We were on the boat and saw it come by. When we saw the boat, first of all we were very impressed by it. It’s a beautiful boat. Very big,” Bonovich said. “But my first comment was, look at the rooster tail on that thing [a rooster tail is an almost vertical spray of water turned up at the stern of speedy vessels]. It was huge. A Navy guy was with us, a retired naval pilot, he said right away, ‘That’s a littoral combat ship’.”

Before any official announcement of the incident, Bonovich and her husband had put much of the story together.

“We put it together right away that it’s from Marinette Marine and undergoing sea trials,” she said. “Since then we’ve looked at YouTube videos of them going at full speed and you can see huge rooster tails.”

That is because LCS-5 (littoral combat ship means it can operate in relatively shallow near-shore waters), better known as USS Milwaukee, is equipped with four Rolls Royce water jets, a propulsion system that can propel the U.S. Navy’s new littoral combat ships to more than 40 knots (46 mph).

“There were two sets of waves. There was the first set that came for maybe five minutes and they stopped, and then they came back,” Bonovich said. “We understand it was the bow wake and then the stern wake. If you look at the YouTube videos, you can see that it creates two sets of wakes. The second set seemed to be worse.”

ENS Thomas Morrell, U.S. Coast Guard public affairs officer for Sector Lake Michigan, said the Coast Guard was not asked to respond to the event, but did confirm that the USS Milwaukee did have a sea trial on Sept. 5.

“They put out a notice to mariners about it,” he said. “We have received just a few reports of swamping or damage. We are working with the DNR to see what the next step would be.”

Bonovich said she will now make it a point to check for similar mariner warnings, but she wonders why testing of such a potentially dangerous propulsion system on a packed section of the lake would take place on one of the busiest boating weekends of the season.

“I hope they get fined or something,” Bonovich said.

An initial report on the incident filed with the Door County Sheriff’s Department said 55-plus boats were damaged by waves from two military vessels, but it was only one military vessel, the USS Milwaukee, and the exact number of recreational boats involved is unknown.

“We don’t have a firm number. I can tell you it is less than 55,” said Chris Groth, Wisconsin Department of Natural Resources conservation warden supervisor for a four-county region that includes Door County.

The DNR and Coast Guard are collaborating on the investigation.

Groth confirmed one injury from the incident, but said that person was taken to the hospital, treated and released.

Until the USS Milwaukee is officially commissioned, the Navy does not own the vessel. The builder, Lockheed Martin, which was conducting “builder trials” on Sept. 5, according to a company statement that came from Joe Dougherty, who handles communications & public affairs for Lockheed Martin MST.

“We are aware of the reported issues,” said an email from Dougherty. “The LCS industry team’s first and foremost concern is the safety and well-being of boaters and bystanders, and we are cooperating fully with the authorities in investigating the incident.”