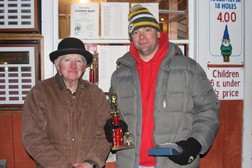 A record number of people played in this year’s Frostbite Open on New Year’s Day at Red Putter Miniature Golf in Ephraim.

Congratulations go to this year’s Frostbite Open Champion Paul Nelson. Nelson, of Fish Creek, shot two rounds of 36 for a total of 72. He received a trophy and the $700 cash prize, plus a trophy for Best Single Game score of 36, a new record for winter play.

Nick Kwaterski, 2014 Frostbite Champion, took second place this year with a two-round total of 76. Jim McDonald and Kathy Franke tied with a two-round score of 79. Jim won the tie-breaker to take the third place trophy home.

Seventy-six people played in this year’s tournament. Temperatures were in the 20s with a light wind and a little sunshine.

The Red Putter will open again for the season on May 1 and is looking forward to the next tournament, The Red Putter Pro Tournament on Aug. 1, 2015.